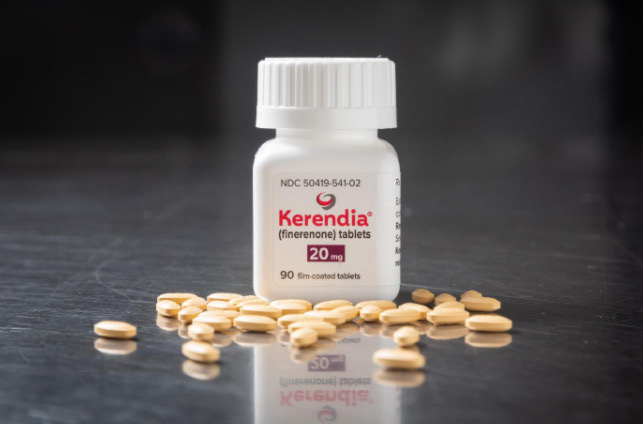 The FDA just approved KERENDIA (finerenone) – a brand new drug which has been shown to slow the progression of chronic kidney disease for people with type 2 diabetes.

On July 9, the FDA approved the drug KERENDIA (finerenone) which has been shown to slow the progression of chronic kidney disease (CKD) that is associated with type 2 diabetes. This new medication is indicated to reduce the risk of eGFR decline, kidney failure, cardiovascular death, non-fatal heart attacks, and hospitalization for heart failure – which are all associated with CKD as a result of having type 2 diabetes.

KERENDIA is a type of drug called a non-steroidal mineralocorticoid receptor antagonist (or MRA). This is the first drug in this class to be approved by the FDA for treating these specific conditions. The way the drug works is by blocking the overactivation of a receptor in your body’s kidney cells called the mineralocorticoid receptor. This reduces fibrosis (built-up scar tissue) and inflammation (the body’s normal reaction to tissue damage or infection) – both of which can cause damage to your kidneys and lead to CKD or kidney failure.

Diabetes is the leading cause of CKD and that it affects one in three adults with diabetes. Thankfully, an increasing number of drugs are being approved that help slow down the progression of CKD in people with diabetes. A number of SGLT-2 inhibitors have been shown to have clear benefits for heart and kidney health including Jardiance, Steglatro, Farxiga, and Invokana. And current and ongoing research on GLP-1 receptor agonists (such as Trulicity, Victoza, Ozempic, and Bydureon) suggests that they too may afford some protection against the progression of heart disease and CKD. With the approval of KERENDIA, healthcare providers and patients now have many options to choose from to help treat and prevent this serious condition.

KERENDIA is expected to be available in the US by the end of July 2021 and it has been submitted for approval in Europe as well.