The Human Side of the Artificial Pancreas from ATTD 2015 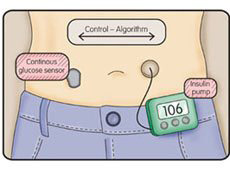 Twitter Summary: #ATTD2015 session highlights human side of #diabetes devices + the #artificialpancreas, why the patient perspective can’t be ignored

Artificial pancreas, bionic pancreas, closed-loop device – the development of automated insulin delivery comes with many names, as well as many misconceptions. While the name “artificial pancreas” may bring to mind the dream of an implanted pancreas-substitute that works just like a biological pancreas would, we are still not there yet. Current systems involve the use of devices - insulin pumps, continuous glucose monitors (CGMs), and software algorithms that decide how much insulin (and in some cases, glucagon) to deliver. Even then, these closed-loop systems still require patient engagement with the system to input information on carb intake, mealtime boluses, and more.

Most patients on closed-loop systems see significantly reduced hypoglycemia, improved time in range, and reduced burden of managing diabetes. However, it will be critical to ensure that these products are made with the patient’s full needs in mind – beyond just better glucose control. This was exactly the theme of an insightful session at the ATTD Conference in Paris, which focused on the psychosocial aspects of artificial pancreas systems.

Excitingly, this ATTD workshop will lay the groundwork for a formal working group on the psychosocial aspects of diabetes technology, with a specific focus on the artificial pancreas. The five panelists at the session will be leading this group, which has already received funding from the Helmsley Charitable Trust. What are your thoughts or concerns about using a closed loop system? Let us know by writing in to diaTribe here!

Highlights from the Speaker Presentations

Dr. Lutz Heinemann warned the audience not to assume that all patients will be excited to use the artificial pancreas when it arrives on the market. Even of those who embrace it, some may find them most useful at night but more hassle during the day. He pointed to CGM as an example of a technology that was initially proclaimed as a must-have device, but which is still only used by about 10% of patients due to cost, hassle, and other factors. Dr. Heinemann lamented the lack of data on the psychosocial aspects of diabetes technology, noting that alarm fatigue, feedback from patients’ families, and other patient-reported outcomes have a clear impact on a technology’s success.

Dr. Korey Hood brought a psychologist’s perspective to the panel, noting that patient attitudes, wishes, emotions, and beliefs are often understudied (or never studied, we might add). He elaborated on the creation of a working group, which hopes to collect data from a broad range of patients on the psychosocial perspectives of artificial pancreas systems, including ease of use, impact on daily function, trust in a device, and perceived impact on diabetes control. Closed-loop systems require relinquishing some trust in an automated system, which takes patients some time to adapt to.

Dr. Katharine Barnard spoke about psychosocial factors in diabetes management. She strongly advocated for the inclusion of psychosocial measures as endpoints in clinical trials. In her view, the fact that funders will only accept trials with a primary outcome related to A1c is a fundamental problem. Dr. Barnard added that closed-loop devices represent a completely new model, because they would be the first to take diabetes management out of the patient’s hands – a welcome prospect for some but potentially anxiety-inducing for others.

Dr. Jill Weissberg-Benchell shared feedback from type 1 patients in recent and ongoing studies of the Bionic Pancreas. We summarize some of this feedback below:

Quotable Quotes from the Panel Discussion

Dr. Jordan Pinsker (William Sansum Diabetes Center): I run the artificial pancreas clinical trials at Sansum and I believe I share a common experience when patients come in for evaluation who say they wear CGM, but when I ask to see it, they don’t have it with them. It turns out they don’t actually use it often, not because of cost or a lack of interest in glycemic control, but because they don’t see the benefits as outweighing the costs. I have grave concerns that when we tell patients that they will still need to bolus with an artificial pancreas or will need to tell the system when they eat, patients will perceive that the benefits may not outweigh the costs… What will artificial pancreas users expect of the system?

Dr. Aaron Kowalski (JDRF Chief Mission Officer):  I find it interesting and – well I wouldn’t want to say disappointing – to hear presenters throw around the term “artificial pancreas” without a proper definition of what an artificial pancreas is. I would argue that there isn’t just an artificial pancreas. There are a series of systems that will become more automated over time. We have seen here the 640G system that will reduce some hypoglycemia. There will be treat-to-range systems. Jill mentioned the anecdote from the boy in the Bionic Pancreas study who said that the tool stopped him from thinking about a plate of food as a math problem. That comment made me sad, because no artificial pancreas will fix that problem now or in the near future. Insulin does not work fast enough yet to have a fully automated system. If we set the wrong expectations, we’re doomed to failure. If you set the expectation that a closed-loop system will reduce some hypoglycemia and will provide some degree of help, you’ll set the balance properly. Starting with defining what the artificial pancreas is will be very important. There is not going to be a fully automated system until we have faster-acting insulin.

Audience Comment: “Even if we can get to a fully automated system, it may not work for everyone. There should be different levels of automation. Perhaps these systems should be designed for specific age groups. What works for an adult may not work for a teenager… I would like to see the gradual introduction of these types of systems. If you gave me a fully self-driving car today, I wouldn’t use it. It would take me many months before I could build the confidence. We can’t just give patients the artificial pancreas and tell them to go out and start using it right away.”

Audience Comment: I have had type 1 diabetes for 46 years and I have no idea how I’m going to be able to completely switch off from managing my diabetes. I would like to build on Aaron’s point: yes we have been talking about the artificial pancreas as a finished product, but it is a system that has multiple components. We’ve been hearing about overnight trials for years. I’ll have that now, please. As a patient, I’ve been working hard for 46 years and I’d really fancy a day off. It would be nice to be on call rather than on duty. I have an insulin pump and I’m always using either CGM or Flash Glucose Monitoring. When I calibrate and see that the sensor is tracking closely, I gladly bolus and correct based on its readings. I trust the technology I’m using. I’ll take whatever you can give me – better is better.

Audience Comment: As a community we would benefit if we did not use terms like adherence and compliance. [Applause]. If we make a lousy product then it is our problem and not the patient’s problem. When we use those terms, we assume that we are right and the patient is wrong. This applies even for CGM. Yes, CGM is helpful. But from another vantage point, it’s like a GPS: it will tell you where you are, but not what to do. Or put another way, it is like sitting in a room full of mirrors when you don’t like the way you look.

Dr. Bruce Buckingham (Stanford University): At the first ATTD, everything was in silico [computer simulations]. Now, we’re talking about human factors. This is so critical, thinking about family members and significant others and notifications. We’re now looking not at what the artificial pancreas can do over a couple of days, but over years. We’ve made tremendous progress to get to the point where we can now really deal with human factors. We’ve moved from the engineering to the human relationships.