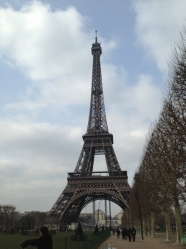 In March, we were privileged to attend the Sixth Annual International Conference on Advanced Technologies & Treatments for Diabetes (ATTD). The conference was held against the beautiful backdrop of Paris, France, and we had a terrific time learning about new diabetes technology and research. The meeting discussed a great number of studies on the artificial pancreas as well as new continuous glucose monitoring (CGM), blood glucose monitoring, and insulin pump technologies, plus a variety of other topics related to diabetes medication and the treatment of complications. The following is our report on the most exciting developments, including new products from Medtronic and CeQur. As a reminder, the artificial pancreas (or “closed loop”) takes readings from a CGM, processes them through a mathematical algorithm, and directs insulin pump dosing. For more information on the artificial pancreas, see learning curve in diaTribe #39.

Though we have learned about a few overnight and at-home artificial pancreas studies in the US, some ambitious and exceptional studies are being carried out internationally. Three of the most interesting came from Dr. Roman Hovorka’s group at the University of Cambridge in the UK and from the DREAM consortium (Diabetes WiREless Artificial Pancreas ConsortiuM), a group of researchers from three hospital centers in Israel, Slovenia, and Germany.

Dr. Roman Hovorka presented the Cambridge team’s work on three home studies using the FlorenceD closed-loop system. FlorenceD uses a first-generation Abbott FreeStyle Navigator, a Dana R Diabecare pump (with Bluetooth), the Companion (an investigational device to communicate with the pump), and a small tablet running a predictive algorithm. The CGM sends data every minute and automated insulin adjustments occur every 12 minutes. The team’s at-home studies began in July and importantly, have patients wearing the closed-loop system over long periods of time – two of the overnight trials range from three to four weeks (one with adolescents and one with adults) and a third day and night trial lasts for a week. Surprisingly, there is no remote monitoring during the home studies! To ensure safety, Dr. Hovorka and his team conducted extensive computer simulations prior to beginning the studies. Additionally, the participants are extensively trained on how to respond if errors occur during the experiment.

The preliminary results from the study are encouraging. While Dr. Hovorka did not share any statistics on time-in-range (which we were dying to get), the individual patient glucose profiles showed good control with in-range blood sugars. We were impressed, especially given the length of the studies. The system has a few important real-world limitations including the need to carry a tablet, limited battery life, and the need to stop closed-loop control in order to deliver a bolus. We look forward to discovering the studies’ final results and learning how the Cambridge team will improve upon its system and perhaps eliminate these limitations.

The DREAM Team’s Investigations of the Artificial Pancreas

On day one of ATTD, the prestigious New England Journal of Medicine released a publication from Dr. Moshe Phillip (Tel Aviv University, Petah Tikya, Israel) and colleagues’ DREAM 3 study, an artificial pancreas study at an overnight diabetes camp. We first covered this study at last year’s ATTD. It reported significant reductions in hypoglycemia and hyperglycemia when patients were on the closed-loop overnight compared to sensor-augmented pumps (SAP). The closed-loop system is called the MD-Logic Artificial Pancreas System (MDLAP), and consists of the Medtronic Paradigm Veo pump, Medtronic Enlite continuous glucose sensor, Bayer Contour-Link blood glucose meter, and a real-time remote monitoring system. Click here to watch a cool video of the trial.

At this year’s ATTD, Dr. Revital Nimri (Schneider Children’s Medical Center of Israel, Petach Tikvah, Israel), presented results from the ongoing DREAM 4 trial. The study advances on DREAM 3 by taking the MDLAP into patients’ homes. Initial results show significantly fewer nocturnal hypoglycemic events: participants using MDLAP spent just 0.6% of their night in hypoglycemic ranges while those on standard pump/CGM therapy had low blood sugars for 9% of the night on average. Time in the range of 70-140 mg/dl was also significantly higher on closed-loop therapy:  57% versus 40%.

We’re pleased to see closed-loop studies moving out of controlled hospital settings and into the real world. We believe the artificial pancreas has significant potential to improve glycemic control (especially hypoglycemia) while minimizing the burden placed on patients and caregivers. In short, less time thinking about diabetes, and more time living life!

New Devices from Medtronic and CeQur

Many companies displayed their new product prototypes at ATTD in the Exhibit Hall, and Medtronic and CeQur had some of the most exciting developments at the conference. Medtronic showcased two exciting products we had never seen in person before. The first was a combined CGM sensor and insulin infusion set under a single patch. From a top view, it looks like a CGM transmitter fused with an insulin pump infusion set. The underside view looks like an insulin infusion catheter and a CGM sensor separated by about half an inch. The combo set is inserted with a single insertion device. We think patients will appreciate the added convenience of integration and less on-body space – of course, this also means the CGM could only be used for three days, since insulin infusion sites need to be changed every three days. The device is still in development and there is no timeline on when it might be approved. Medtronic also showed off a mobile hub that wirelessly and automatically sends pump and sensor data to the web-based CareLink platform and smartphone applications. This “Connected Care” system would alleviate the need to manually upload data and could also send alerts to loved ones about high and low blood glucose readings. Like the combo set, there is no timeline on when it might come out, though the potential bodes well for diabetes care being better shared.

CeQur’s PaQ insulin delivery device for type 2 diabetes was another highlight of the ATTD exhibit hall. The round device is about the size of a business card and the thickness of a smartphone, and it holds 330 units of insulin (up to three days). PaQ is a simple patch delivery device that is worn on the body (similar to the OmniPod). It will have a pre-set basal rate and a small on-device button that can press through clothing to deliver boluses. This insulin delivery device received a CE Mark for approval in Europe in late November 2012; we are awaiting further word about the US regulatory process.

For most people with type 2 diabetes, insulin pump therapy does not require all the custom features that pumps for type 1 diabetes normally have. However, there is only one other simplified insulin delivery device on the market: Valeritas’ once-daily V-Go Disposable Insulin Delivery Device. Considering that over 50% of 502 type 2 patients in one survey reported skipping injections occasionally (20% omitted doses regularly), we’re always excited to see new delivery devices that make taking insulin easier.