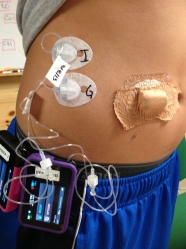 By Alasdair Wilkins and Adam Brown

For many children and teenagers, summer camp is an unforgettable rite of passage, and a chance to cut loose from the watchful eyes of parents. While it might seem that the daily challenges of regular glucose monitoring and insulin dosing would severely complicate the camp experience for children with type 1 diabetes, that isn’t true at all! For many decades now, the Barton Center’s Camp Clara Barton for girls and Camp Joslin for boys give young people with diabetes the total camp experience in a safe environment, with healthcare professionals on hand to provide medical support and education.

This summer, these camps provided the perfect setting for the most intensive field test yet of Dr. Ed Damiano and Dr. Steven Russell’s bionic pancreas. Their closed loop system uses a Dexcom G4 Platinum CGM to continuously monitor glucose levels, which a control algorithm on an iPhone uses to direct dosing of insulin and glucagon using a pair of Tandem t:slim pumps. Kelly Close, diaTribe’s editor-in-chief, participated in the Beacon Hill bionic pancreas study in Boston earlier this summer, and she discusses how the system works – and how transformative it was – in in our previous test drive. Kelly describes how the system provided excellent glycemic control with almost no hypoglycemia. The bionic pancreas was like a five-day vacation from diabetes itself! Could the bionic pancreas replicate those same results with younger users in the wilder summer camp atmosphere? While all the participants in the earlier study had been adults, the campers in the Joslin summer study were 12-20 years old, and this is a more challenging population, since adolescents tend to have much higher A1c’s and more trouble with glycemic control.

As it turns out, the bionic pancreas could achieve terrific results with these campers. The 32 participants in the study – 16 boys at Camp Joslin and 16 girls at Camp Clara Barton –wore the device through all their normal camp activities. While specific data isn’t yet available, multiple campers told diaTribe that their blood glucose averaged between 100-140 mg/dl while on the bionic pancreas, and they experienced very little hypoglycemia. One participant told us, “I have done my diabetes management for 14 years, and this is exponentially better than I have ever done.” This was particularly encouraging to hear, as these campers were already highly motivated to manage their diabetes. Most already had tight glucose control, used insulin pumps and CGMs, and received care from the renowned Joslin Clinic.

Good glucose control was just one of the system’s benefits. Campers overwhelmingly told us that it took the burden off of managing diabetes. One study participant said, “This is like the fifth day where I have not had to do anything for my diabetes.” While the system in its current research form is somewhat bulky to carry around and requires daily set changes, most campers we talked to wanted one as soon as possible.

Notably, the young participants were free to be as wild and crazy as any kid at summer camp, and if the campers were trying to be careful with this innovative, highly expensive closed loop system, they didn’t show any evidence of it. As Dr. Russell happily told us, “They are brutal on this equipment.” The kids even tried belly-flopping and sliding around on a wet, grassy patch covered in rocks –not because they were trying to field-test the bionic pancreas, but just because, well, that’s the sort of thing that kids like to do. On another occasion, a camper’s control unit fell between two brick walls in the shower room. However, it was still able to read the camper’s CGM data and properly control insulin and glucagon levels, all while trapped behind the shower wall.

Just as important, the campers were able to take part in more low-key activities without having to worry about their diabetes. The study participants slept in the same cabins as their fellow campers, and they were allowed to eat whatever they wanted during mealtime. Some campers admitted that they had been nervous about completely turning over responsibility of their diabetes to a device. As one camper told us, “It goes against what we are taught – we are taught from a young age to know what we are putting into our body.” Another observed, “I was really worried about not being in control of my blood glucose levels. It was scary thinking that thing would be putting insulin or glucagon in my body during my sleep without my knowing.” Those initial reactions are understandable, and they will likely be heard many more times as more automated insulin delivery technologies come to market. Still, when asking the campers about their general feelings about the bionic pancreas, one word surfaced more than any other: “awesome.”

So, what lies ahead for the bionic pancreas? Drs. Damiano and Russell will soon wrap up the Beacon Hill Study, and they plan to begin a 12-person study this October on a small change to the bionic pancreas that incorporates exercise information. A 48-person study in 2014 will have hospital staff with diabetes wear the system for nearly two weeks as they sleep at home and go to work as usual. The ambitious sequel to this year’s summer camp study will be next year’s Pediatric Summer Camp Study, where the bionic pancreas will be worn by 24 kids between the ages of 6 and 12.

The biggest challenges have to do with the components of the system itself.

Drs. Damiano and Russell hope the bionic pancreas could be approved by the FDA in 2017 (in time for Dr. Damiano’s son to go to college!), though they admit that their timeline is optimistic, and some elements are out of their control. Still, when we asked one camper whether he would buy the bionic pancreas as it currently stands, he was quite frank: “Absolutely. I would get it, even if it meant having to wear two pumps and a CGM, do site changes for each pump every day, and mix the glucagon each morning. I would buy it as is.”

When teenagers are happily volunteering to do extra work, it’s safe to say we’re dealing with something special.