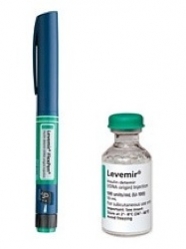 On January 11, 1922, a 14-year-old with type 1 diabetes named Leonard Thompson received an experimental injection at the Toronto General Hospital that would change history. At the time, type 1 diabetes was thought to be a death sentence, and the injection – a crudely purified derivative of fetal calf pancreas –was a last-ditch effort to keep the nearly comatose boy alive.

The experimental injection was not an immediate success. Thompson suffered a severe allergic reaction and the insulin injections were stopped, but the researchers did not give up hope. They worked quickly to make a purer version of the insulin treatment, and with this new injection Thompson's symptoms began to improve. After using the experimental injections for about two weeks, his blood sugars returned to near-normal levels. Thompson's life was extended by an additional 13 years using insulin, and Frederick Banting and J.J.R. Macleod, two of the lead researchers, went on to win the Nobel Prize for their pioneering work (the prize was later shared with colleagues Charles Best and James Collip). it is remarkable how much insulin therapy has improved. The first commercial insulins were impure, large-volume bovine (cow) or porcine (pig) formulations injected with large needles that patients had to sharpen themselves. Today, a wide variety of extremely pure human or insulin analog formulations are available, with extremely thin disposable needles and compact insulin pumps to match.

Most people in the U.S. on insulin now use insulin analogs. An analog is a synthetic (i.e., chemically altered) form of human insulin designed to have special properties such as more rapid onset or longer duration of action. Insulin analogs are only slightly different from regular human insulin, but these minute differences have enormous implications. Whereas regular human insulin takes about 30 minutes to begin working and lasts up to eight hours, rapid-acting insulins—like NovoLog, HumaLog and Apidra—start reducing blood sugar as quickly as 15-25 minutes after injection and remain active for only three or four hours, more closely matching the normal secretion of insulin after a meal by a healthy pancreas.

Then we have the long-acting insulin analogs, Lantus and Levemir, which are designed to imitate the background or baseline insulin secretion of the pancreas that occurs between meals. For this reason, they are often described as "basal" insulin analogs. The relative advantages and disadvantages of the two long-acting insulin analogs have been a point of controversy among physicians and researchers. Several studies have indicated that Lantus works for a longer period than Levemir. As a result, Lantus is typically given as a once-daily injection, while more than half of all patients using Levemir require a second daily injection. On the other hand, Levemir is thought to cause somewhat less weight gain than Lantus – a one year study showed a difference of about 2.2 pounds. Additionally, some studies have shown that people using Levemir tend to have a more consistent day-to-day response to this insulin than those on Lantus. What about NPH, lente and ultralente insulin? These are older long-acting insulins that have different action profiles than Lantus and Levemir. These insulins used to be made from cow or pig insulin, but are now made from human insulin. Most studies have found that NPH stops working entirely after 12-14 hours, and for this reason it is typically given at least twice a day. All three of these insulins have periods in which they lower blood sugar more than at other times – known as a “peaking effect.” For this reason, they may put patients more at risk of hypoglycemia than the long-acting insulin analogs. On the plus side, NPH, lente, and ultralente are tend to be relatively cheaper compared to Lantus and Levemir.

Not all doctors believe that long-acting insulin analogs are worth the increased cost over NPH, lente and ultralente. The ongoing debate about the use of insulin analogs came to a head at the 2008 Advanced Technologies and Treatments for Diabetes Conference held in Prague, the Czech Republic. At this meeting, Dr. Frits Holleman (Academic Medical Centre, Amsterdam, The Netherlands) argued against the use of insulin analogs, describing them as "all about marketing, which gives importance to trivial differences, such as a 0.5 kg difference in weight gain." He explained that several studies from the Cochrane Collaboration and the German Institute for Quality and Cost Effectiveness in the Health Care Sector had found "only a minor clinical benefit of treatment" with insulin analogs. Conversely, Professor Thomas Danne (Kinderkrankenhaus auf der Bult, Hannover Medical School, Germany) argued that insulin analogs help diabetes patients to attain insulin delivery and insulin action similar to people without diabetes and reduce the occurrence of hypoglycemia, leading to much-improved quality of life. Many doctors in the audience seemed to agree with Dr. Danne and one physician asked Dr. Holleman rhetorically, "Are you actually telling me you wouldn't want to use insulin analogs if you had diabetes yourself?" Patients now have several good insulin choices, but there is still room for improvement. To understand why today's insulins aren't perfect, we must first define "perfect" insulin therapy. The "perfect" insulin therapy would exactly mimic the secretion of insulin in a person who does not have diabetes. This means having a steady, flat (so called "peakless") baseline level of insulin (long-acting insulin), along with sharp spikes in insulin release in response to meals (rapid-acting insulin). However, the long-acting insulin analogs of today still show a small peaking effect - i.e., insulin levels are not completely flat over time - and the rapid-acting insulin analogs aren't quite fast enough to cover the initial rise in glucose that follows a meal. We would also love to see insulins that cause less weight gain and hypoglycemia, and are simpler to correctly dose and administer.

Fortunately, several new long-acting insulin analogs are in development. One of these is being developed by Novo Nordisk, though very few details have been given about this drug. We hope that it will have properties very similar to Novo Nordisk's current long-acting insulin, Levemir, but will work for a longer period of time and have even less “peaking” and variability of action from day to day. We recently learned that Eli Lilly is also working to develop a long-acting insulin analog. Both of these basal insulins are still in the very earliest stages of development, and they will be in testing for a number of years before they become commercially available. VIAject reached its peak effect in 34 minutes after it was injected, compared to 63 minutes for HumaLog and 140 minutes for human insulin. This study was small (16 patients) and researchers are eager to find out if these results can be reproduced in a larger study population. Based on this small trial, VIAject appears to have its greatest effect after about 30 minutes, compared to one hour for the current generation of rapid-acting insulin analogs. Through its quicker action, VIAject may better mimic the body's natural insulin response to meals than the currently available insulin analogs. This means that post-meal blood sugar may be better controlled, and a lower insulin dose may be needed. Since VIAject stops working more quickly than the current insulin analogs, it may also lower a patient's risk of hypoglycemia long after a meal.

How does VIAject work so quickly? Interestingly, VIAject is not an insulin analog. It is actually good old human insulin formulated in a special preparation that makes it work more quickly. When human insulin is normally injected into the body, it has the tendency to clump together into groups of six insulin proteins. These unwieldy aggregates take a long time to become active because they must first break into groups of two, which then separate into single molecules of active insulin (called insulin monomers). The current rapid-acting insulin analogs (NovoLog, Humalog and Apidra) are more rapid

than regular human insulin because their slightly changed structure makes them less likely to clump together. VIAject, on the other hand, is formulated in a way that breaks apart insulin clumps and prevents the clumps from reforming.

VIAject will likely be joined over time by other novel rapid-acting contenders, including a new inhaled insulin in development by Mannkind (see Learning Curve from our Jan/Feb 2008 issue of diaTribe for details; note that Novo Nordisk and Eli Lilly have since discontinued their meal-time, inhaled-insulin programs). We'll be updating our readers about all of these insulins in upcoming issues of diaTribe.

Insulin has covered a lot of ground in its journey from the hospital room of Leonard Thompson 86 years ago. The insulins today aren't perfect, but they are light years better than the crude bottles of cow insulin from yesterday. As we wait for the insulins of tomorrow, we should also recognize how far insulin has already come and make the best use of the tools we have available today.