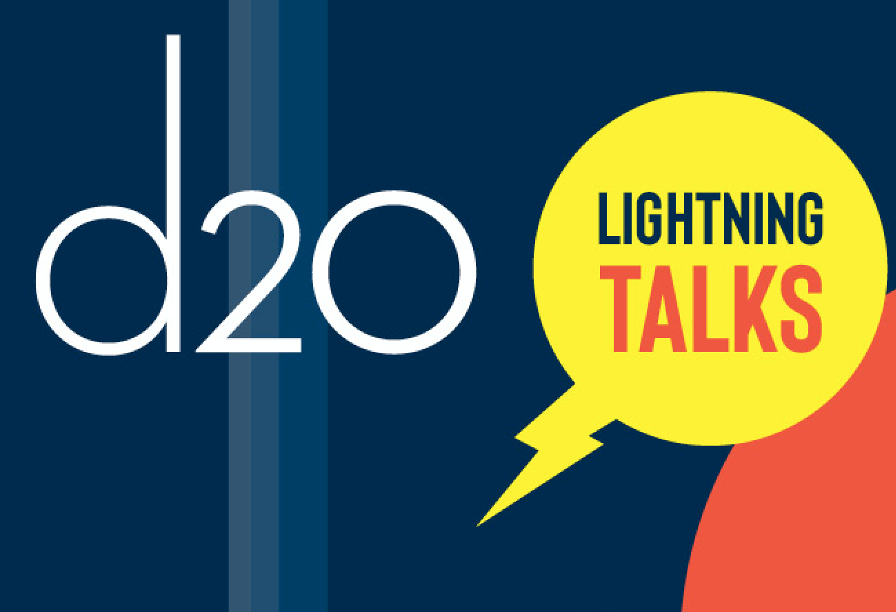 During diaTribe’s d20 Lightning Talks, we heard from five leaders about stigma, how it negatively affects people with diabetes, and what can be done to counter the false narratives that lead to stigma

The fascinating topic of diabetes stigma was the focus of the diaTribe Foundation’s d20 Lightning Talks on October 15, 2020. Diabetes stigma describes those negative feelings of blame or shame that people with diabetes regularly and unfairly experience, leading to exclusion, rejection, or criticism due to the health condition. Five speakers shared different, real-life experiences and perspectives on the role that stigma plays in their lives: a TV star with diabetes, a renowned researcher who studies stigma for a living, an anthropologist who teaches people how to strategically challenge stigma, an advocacy leader who shared her highly successful fight against stigma, and a diabetes healthcare professional who addresses stigma in healthcare. All speakers provided insight on powerful ways to challenge the thought processes that fuel diabetes stigma, and delivered one message: people with diabetes need to create their own narratives on diabetes and share them with the world to diminish stigma. Only then can we eliminate the confusion, discrimination, and ignorance around diabetes – and eventually stigma, as well.

The virtual event, moderated by David Lee Strasberg of the Lee Strasberg Institute (who himself has type 1 diabetes), was a huge hit with the hundreds that attended. If you missed the Lightning Talks or would like to see them again, we strongly encourage you to watch here. The speakers were:

Research shows that diabetes stigma is prevalent and it worsens health outcomes for people with diabetes. Dr. Rebecca Puhl, an expert in obesity stigma, spoke to the importance of scientific research in challenging the false narratives surrounding diabetes to kick off the Lightning Talks. Dr. Puhl described disease stigma as “a social construct of illness” which typically involves blaming people for their condition. Dr. Puhl said, “There is broad recognition that stigma undermines the prevention and treatment” of certain diseases; however, due to a lack of scientific research, diabetes stigma has not been adequately recognized as a barrier to diabetes management. Using examples from her study of obesity stigma, Dr. Puhl laid out five ways that data can help challenge diabetes stigma:

Though research on diabetes stigma does exist, Dr. Puhl argued that we need far more evidence to help tackle this problem. According to Dr. Puhl’s recent research, 40-60% of adults with type two diabetes in the US reported experiencing forms of diabetes stigma. People who reported these experiences and who internalized this stigma were found to have more challenges with diabetes self-care and more severe health outcomes. “Effective advocacy and societal change needs policy-relevant science,” said Dr. Puhl. “As we think about initiatives and strategies to address diabetes stigma, we need to expand existing research efforts to actively engage researchers, to strengthen the foundation of knowledge and evidence on diabetes stigma, to disseminate this evidence broadly to educate and mobilize the medical community and inform policy initiatives, and to ultimately identify the most effective ways of ending diabetes stigma, so that we can really shift the current culture of blame and shame to a culture of support and respect for individuals with diabetes.” 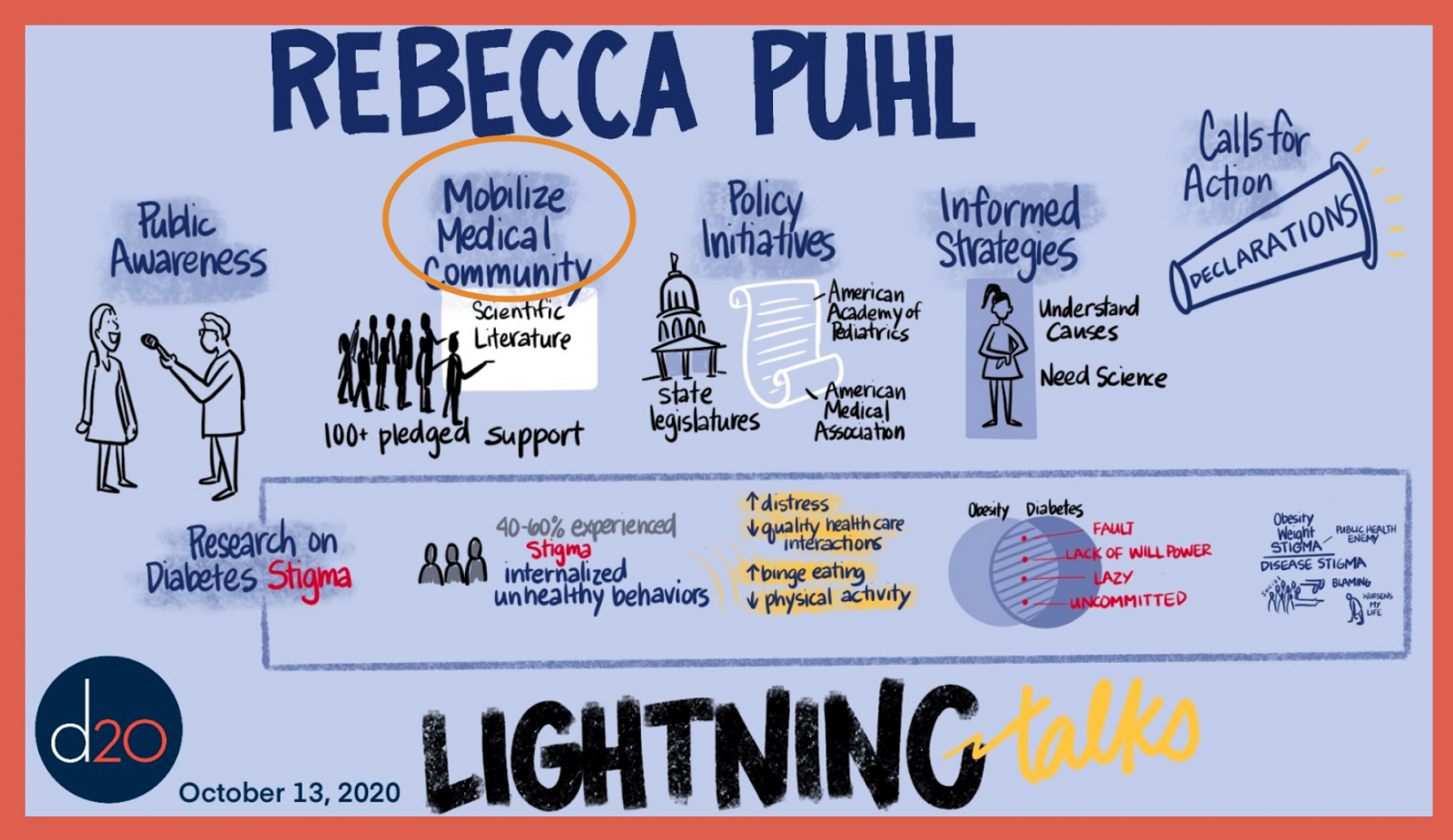 People with diabetes face both external and internal diabetes stigma that often makes diabetes management more difficult. Diagnosed with type 2 diabetes almost 20 years ago, Anthony Anderson shared his story and his experiences overcoming stigma. After being diagnosed and learning about the related symptoms, Anderson said he realized that his father had likely been living with undiagnosed diabetes for almost two decades. Anderson’s mother was also diagnosed with type 2 diabetes, and his father later died from diabetes-related complications. Anderson described his father’s death as a “reality check” that motivated him to really engage with his health and future wellbeing. He said, “I made the choice that I wasn’t going to die from this condition but that I was going to live a healthy life with it.” Anderson has since dedicated himself to managing his own health and helping others with diabetes and prediabetes to do the same. In his show black-ish, Anderson incorporated his experiences with diabetes in the episode Sugar Daddy. Anderson has also created the Get Real About Diabetes campaign, which seeks to “empower people with information” about managing diabetes. 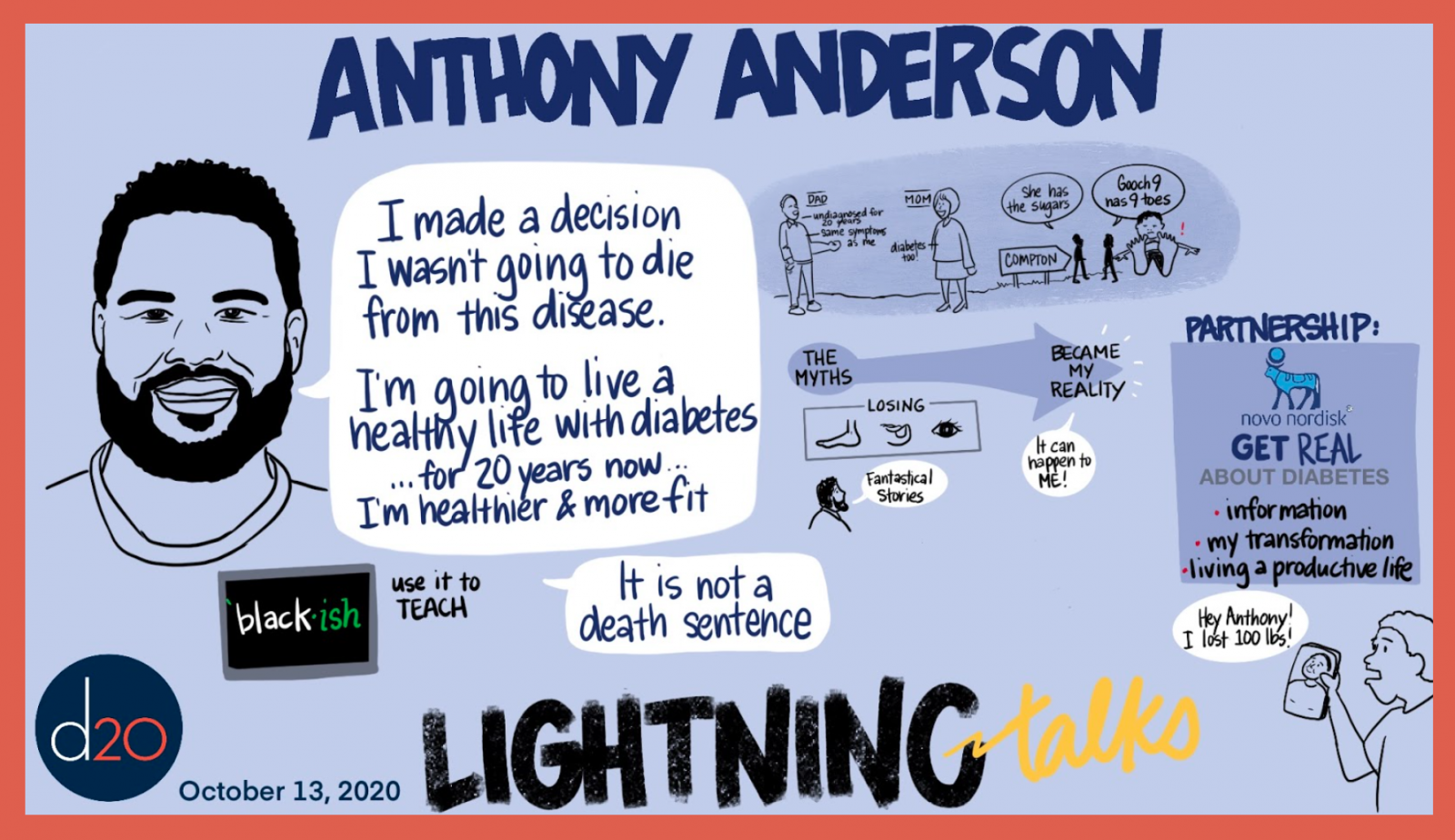 Challenging diabetes stigma requires efforts to reframe the cause and experience of living with diabetes. Dr. Nat Kendall-Taylor, Chief Executive Officer of the FrameWorks Institute, is a psychological anthropologist and an expert in strategic framing. Dr. Kendall-Taylor defines framing as “the choices that we all make in how we present information...Framing is about how those choices influence how people think, how they feel, and what they are or are not willing to do as a result of hearing what we have to say.” In his talk, Dr. Kendall-Taylor used examples of frames surrounding child mental health and COVID-19 to highlight the power of language and its ability to influence behavior, medicine, and policy. If done successfully, framing has the potential to “create space for people to engage with our issues in new ways,” but certain frames have consequences and can impede positive change. With that in mind, he encouraged everyone to take the time to think about the existing frames in our everyday lives that contribute to diabetes stigma and what new language we can use to fight it – go out and “frame on” said Dr. Kendall-Taylor. 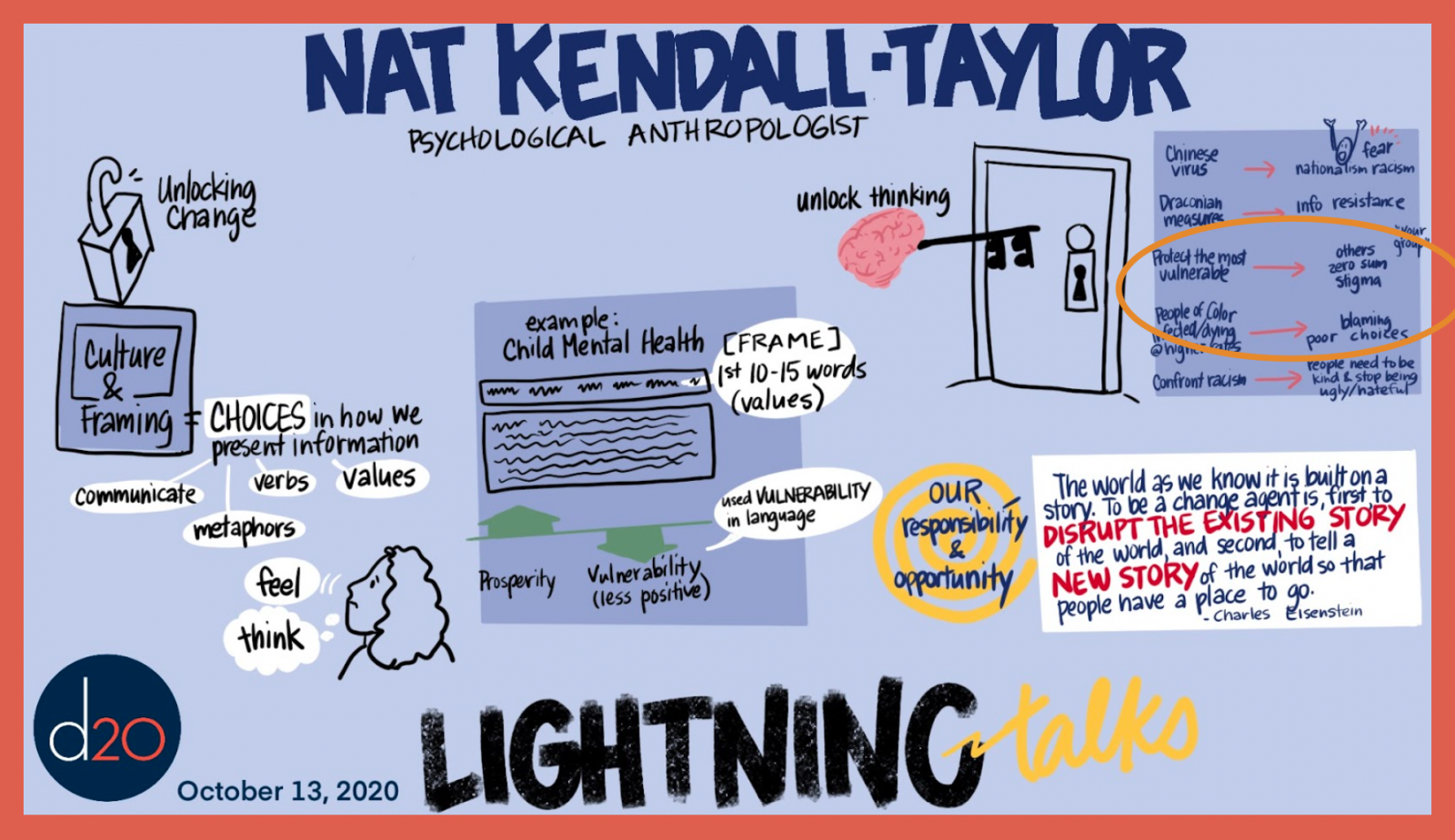 Media advocacy is an essential, and successful, tool to encourage a more inclusive and accurate understanding of diabetes and to reduce diabetes stigma. Joan Garry, a national leader in the LGBTQ+ community and nonprofit consultant, spoke to the value of media advocacy, a form of advocacy targeted at media outlets, using examples from the LGBTQ+ movement. Garry explained how the frame around the LGBTQ+ community shifted over time, and how re-framing in the media led to incremental successes. This specific type of advocacy is effective in countering stigma, Garry said, because it provides “fair, accurate, inclusive visibility that tells the whole story.” This media visibility can encourage increased understanding and acceptance of people with diabetes. Garry also said that challenging diabetes stigma “is not entirely about eliminating stereotypes;” because stereotypes are grounded in reality and hard to discard, it’s more important to “advocate for a broad palette of images and stories” so that people understand the mixed experiences of the diabetes community. 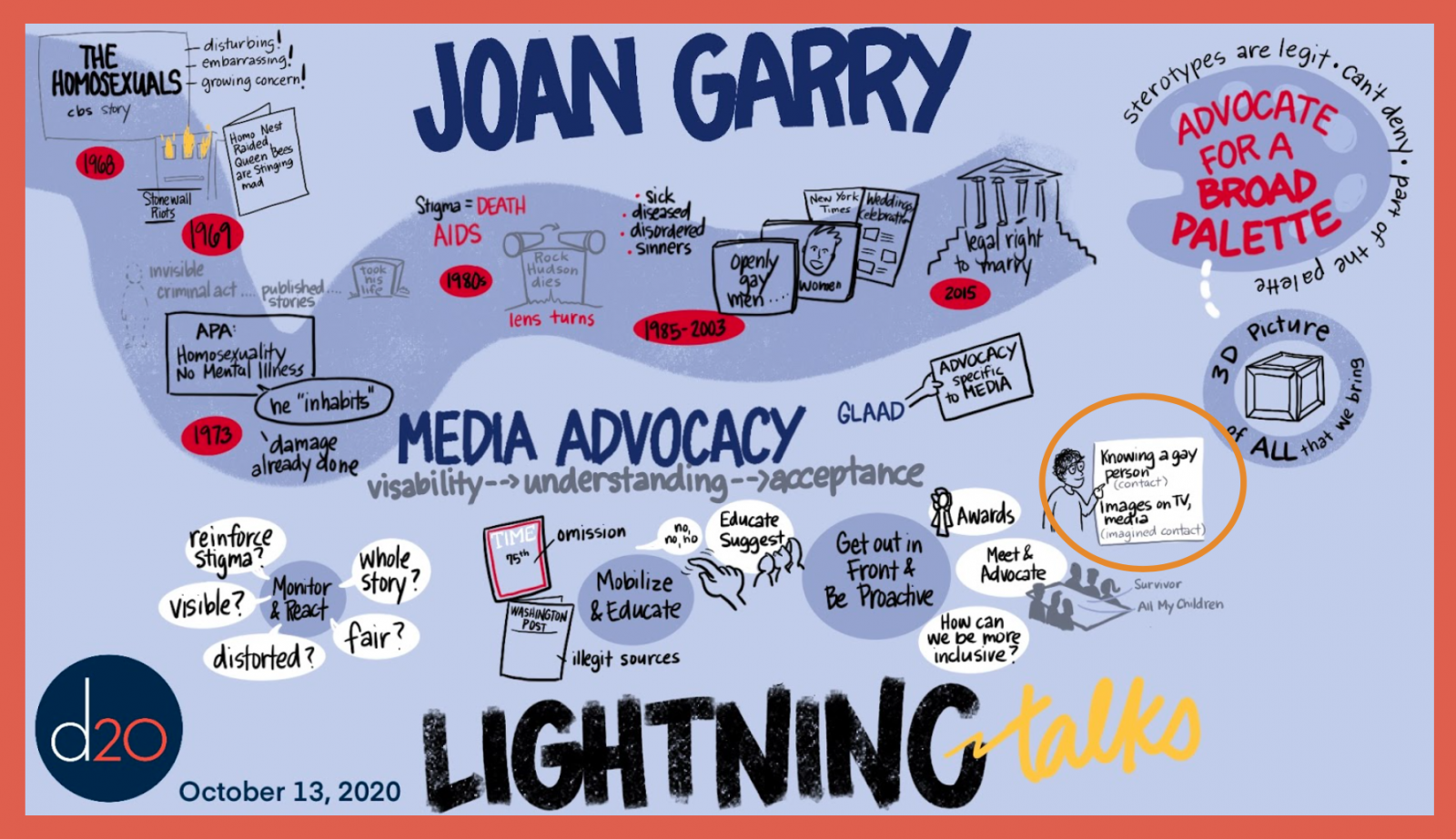 Healthcare professionals play a pivotal role in understanding and challenging diabetes stigma. Dr. James Gavin is a leader in diabetes medicine. To conclude the event, he described his journey to understanding the impact of stigma and ways he has found to counter it in healthcare. Dr. Gavin’s first experiences with diabetes stigma were in his childhood, when his great-grandmother experienced severe diabetes-related complications, and few adults in his family were willing to discuss her condition. He said, “This issue was so glaringly obvious. It was stigma driven by fear and ignorance.”  Dr. Gavin has heard diabetes stigma echoed by his patients and has worked to dismantle stigma in his practice. According to Dr. Gavin, “Far too many times have I witnessed the ability of stigma to drain energy, exterminate hope, and impose silence and reticence when there should be comfort and benefit of open exchange.” Speaking to his role, and that of healthcare professionals, Dr. Gavin describes his job as helping people with diabetes “comfortably achieve insights and expertise” into their own health to “strip the condition of its mystery and hopelessness.” 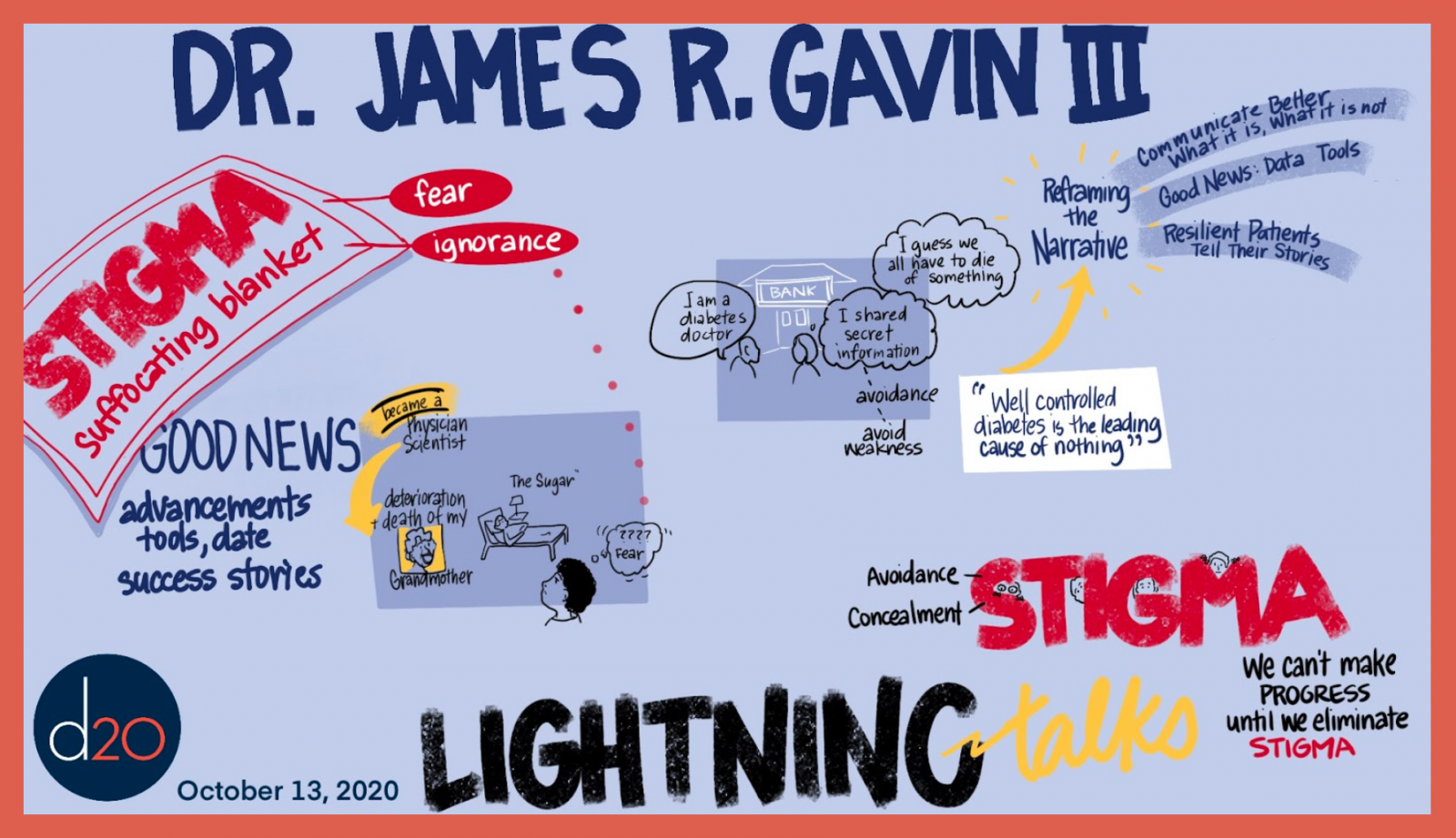 A few more quotable quotes from the diabetes and stigma experts: