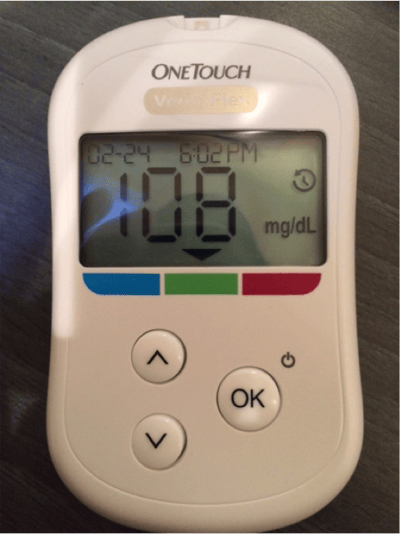 J&J/LifeScan recently announced the US launch of its new Bluetooth-enabled OneTouch Verio Flex blood glucose meter. The device has built-in Bluetooth and pairs with an updated OneTouch Reveal app, which now works with Apple Health and Android phones. The meter is already available online, coming soon to pharmacies, and priced at a reasonable $19.99. It uses LifeScan’s accurate Verio test strips. The updated OneTouch Reveal app is available for free on Apple and Android devices, and like its predecessor, includes automatic high and low pattern recognition. The previous OneTouch meter with Bluetooth, the VerioSync, has now been discontinued.

Aside from Bluetooth connectivity and a smaller size compared to the Sync, the Flex is on the basic side in terms of on-device features. LifeScan plans to add functionality to the app over time, including plans to integrate WellDoc’s FDA-approved BlueStar software for type 2 diabetes. More details on the meter, app, and WellDoc integration are below!

The Flex’s low cost is certainly one of its greatest benefits, though LifeScan did have to make a few trade-offs in terms of design features. The drawbacks of the Flex include:

WellDoc and J&J recently announced a new partnership to integrate the OneTouch Flex meter and Reveal app with WellDoc’s FDA-approved BlueStar software for type 2 diabetes. BlueStar is currently available as an app and on the web by prescription only, offering patients real-time coaching, educational videos, motivation, and tools like a carb counter and “Yelp-like” feature to find nearby diabetes-friendly menu items. Right now, BlueStar users have to manually enter their blood glucose values into the app, which adds hassle and room for error; this integration will make that entry automatic.

The companies have not shared specific timing on the integration, but we assume a launch in various steps could happen over the next year. The first integration will likely use the apps side-by-side: the Flex’s built-in Bluetooth will send data to the Reveal app, which will relay that data to the BlueStar app. Future integrations might be more direct, with a single app that receives the Flex data and gives patients feedback.

What we like about BlueStar is the move away from basic historical pattern recognition into real-time, actionable, individualized feedback. We hope J&J’s expertise can bring BlueStar to many more people with type 2 diabetes – the software is only available in the Mid-Atlantic US right now, with just over 10,000 prescriptions written to date. -AJW/AB