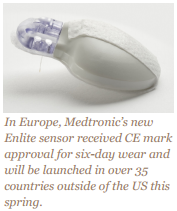 April has been quite a busy month for Medtronic with the launch of new CareLink software that is finally Mac-compatible and the introduction of the greatly anticipated new Enlite continuous glucose monitoring sensor overseas.

The FDA approved the new CareLink Personal 5.4 software, which will allow US Mac users to access web-based tools that allow them to download meter or CGM data and analyze glucose data with a variety of reports, charts, and graphs. Over 35 blood glucose meters, some of which are not Mac-compatible through their own manufacturer's software, will be supported on the new free CareLink platform. The software is compatible with the latest operating software for both Mac (Mac OS 10.6 and 10.5 Intel-based computers) and Windows (Windows 7, Vista, and XP).  diaTribe's own Adam Brown is now testing Medtronic's CareLink Pro 3.0 for the next edition of Test Drive.

In Europe, Medtronic's new Enlite sensor received CE mark approval for six-day wear and will be launched in over 35 countries outside of the US this spring. This sensor has been highly anticipated as it is designed to be both more comfortable and accurate than previous generations. The new sensor is 69% smaller by volume and half the length of the previous Medtronic sensor, now a 27-gauge needle at its thinnest point. The insertion process is also easier and less intimidating, with a vertical 90-degree insertion technique that keeps the needle hidden the entire time. In addition, the device is now more accurate due to several design improvements, including less temperature-driven volatility and fewer adverse interactions with drugs. We see these features as welcome improvements by all CGM users, but particularly for children (and their parents!). Unfortunately for those in the US, it seems that the FDA's conservative stance may set back approval by at least another year. See this issue's Test Drive for an update on the Enlite from Greek diabetes patient advocate and diaTribe reader Nikos Filippou.  –JS