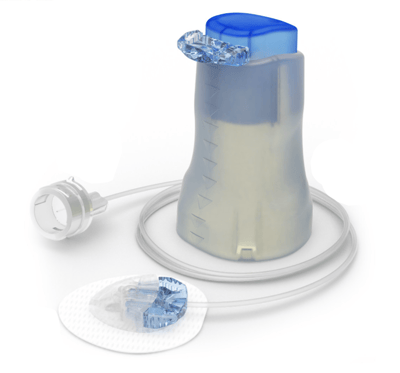 Medtronic’s Extended insulin infusion set doubles the wear-time of a traditional infusion set. The device is launching in Finland and Belgium, with other European countries coming later this year.

Medtronic recently announced the launch of its new Medtronic Extended infusion set which can be worn for up to seven days. This new infusion set will require fewer site changes and fewer interruptions to insulin delivery, making diabetes management more convenient and less burdensome. Plus, it is designed to maintain insulin flow for longer. The new tubing connector is intended to improve the stability of insulin, the reliability of infusion site performance, and it reduces the risk of infusion set occlusion.

An infusion set is part of an insulin pump – it’s the tubed device that delivers insulin from the pump into the body. While traditional infusion sets (including Medtronic’s MiniMed Mio Advance infusion set) must be switched out every two to three days, the new Medtronic Extended infusion set is designed to be worn for up to seven days.

Medtronic piloted the new infusion set with more than 100 insulin pump users in Finland and the early feedback has been positive. The device is launching first in Finland and Belgium, with other European countries later this year. The Medtronic Extended infusion set is compatible with MiniMed 600G and 700G series pumps, including the 670G, 770G, and 780G automated insulin delivery systems.

In testing results shared in 2020, the Medtronic Extended infusion set had a seven-day survival rate of about 81% (in 82 total insertions). That means that 81% of the time, users were able to wear the infusion set for a full seven days. For context, Medtronic’s current infusion set has a three-day wear rate around 77%. Medtronic estimated that the longer wear-time would save five to ten vials of insulin per year, reducing both insulin waste (with savings of about $1,500 to $3,000 per year for most users) and plastic waste (by up to 4.2 pounds per user each year).

For those in the US, Medtronic expects to submit the Medtronic Extended infusion set to the FDA before the end of this month. A 291-person trial for the device ended in November 2020 and Medtronic plans to share the study results at this year’s ADA 2021 Scientific Sessions.