New Tech and the Psychological Toll of Diabetes Management 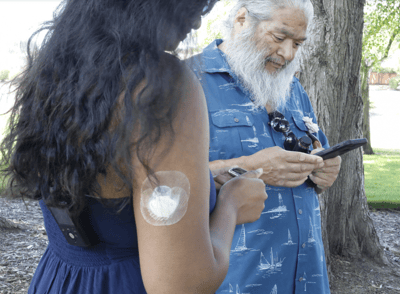 Diabetes technology has come a long way over the years, and even more exciting developments seem to be right on the horizon; however, it’s important to be aware of the psychological effects of these devices and the roles they play in diabetes distress.

Since the first commercially available blood glucose meters (BGM) and test strips became available in the 1970s, there have been monumental changes in the accuracy, ease, and pain associated with monitoring glucose levels, said Dr. Guido Freckmann, medical director and General Manager of the IDT in Ulm, Germany.

Throughout the 1980s and 1990s, BGMs became smaller and more accurate, and they became an essential part of diabetes management – especially after the 1993 release of the DCCT study, which proved that intensive glucose management directly reduced the likelihood of having diabetes-related complications.

As we entered the 21st century, continuous glucose monitoring systems (CGM) exploded onto the market, and over time, these new devices progressively becoming more accurate and less invasive. Today, these systems have advanced to a point where they can be wirelessly connected with smartphones, require minimal need for calibration, and some can even be implanted under the skin.

“There has been a six-fold increase in the market size for CGM devices since 2012,” said Dr. Freckmann. “This has also allowed us to use [metrics like] Time in Range, which was not previously feasible with SMBG.”

Looking toward the future, non-invasive glucose monitoring, or monitoring that completely eliminates the need for fingersticks or needles, is at the forefront of diabetes technology development.

Researchers are investigating how to use everything from ultrasound to microwaves in order to achieve non-invasive remote sensing of glucose levels. Devices that can monitor glucose levels using saliva, breath, or even tears have been proposed and are under further research and development. And currently, there has been a rapidly growing interest in the next generation of smartwatches having glucose sensing technology; however, this has yet to come to fruition as no research teams have yet been successful.

While there has always been excitement around new technologies, there continues to be barriers that prevent them from being used by all people with diabetes. Dr. Linda Gonder-Frederick, an expert on behavioral and psychological issues in diabetes at the University of Virginia, shed light on how diabetes technology can affect quality of life, adoption of treatment, health outcomes.

Dr. Gonder-Frederick discussed a research study showing that roughly 55% of people with diabetes had positive, open attitudes toward technology. However, another 20% had negative attitudes and did not trust technology, while the remaining 25% either did not want additional data, did not want to wear a device on their body or had a very high level of diabetes distress related to using devices.

Another study that focused specifically on people with type 2 diabetes revealed a surprising conclusion: the uptake of technology was actually lowest among people aged 18 to 25. This group also had the highest levels of diabetes distress and the highest A1C levels, and many reported that they did not like having a device on their body as their main reason for refusing the devices. Others reported the frequency of alerts and alarms, feeling physically uncomfortable, and cost as reasons for rejecting devices.

Dr. Gonder-Frederick discussed how CGM can have positive effects on quality of life. According to a study from Diabetes Care, using flash CGM (also called intermittently-scanned CGM) had a positive effect on lowering diabetes distress levels. Specifically, people reported feeling less overwhelmed and a decreased feeling of failure when thinking about their diabetes management.

“We have to watch out for negative judgments, by both healthcare providers and society, against those who choose not to use devices, or those who use devices but do not achieve near-perfect glucose control,” said Dr. Gonder-Frederick, advocating for more research into the barriers toward adopting new diabetes technology. “We will need to find ways to avoid making patients feel guilty about their choice of technology use.”