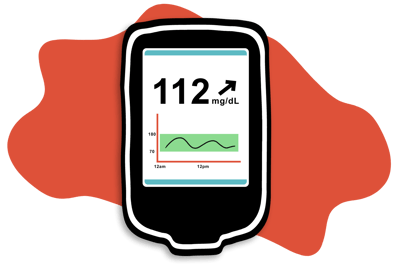 A follow up to the MOBILE study, which demonstrated improvements in A1C and Time in Range for continuous glucose monitoring system (CGM) users with type 2 diabetes, shows that discontinuing CGM can erase these improvements.

Initial results from the MOBILE study, which included 175 people with type 2 diabetes on basal insulin, showed that using CGM significantly improves A1C and increases the Time in Range (TIR) for those in this population. When compared to the group using a blood glucose meter (BGM), on average, participants in the CGM group spent 3.8 more hours each day in range, and they reduced their A1C by 0.5 percentage points (a 1.1% vs. 0.6% reduction in CGM vs. BGM groups).

Recently, new results were released on the six-month follow up to the MOBILE study, showing that discontinuing CGM use for extended time can negatively affect A1C and Time in Range (TIR).

After the initial eight-month period of the MOBILE study, researchers wanted to understand if these improvements brought on by CGM would disappear if participants switched back to BGM. In the follow-up study, people initially using BGM continued to use it, while participants in the CGM group were randomly assigned to either continue using CGM or were switched back to BGM.

What resulted were significant decreases in TIR for those who discontinued their CGM use. In the initial MOBILE study, people in the CGM group saw an average improvement of TIR from 38% to 62% by the end of the study. At the end of the six-month follow up, those who switched back to BGM then experienced a decrease in TIR from 62% down to 50% while those who stayed on CGM did not see a significant change in their average TIR.

While CGM has helped people with type 1 diabetes improve their A1C and Time in Range for many years, the MOBILE study and the six-month follow up demonstrated the positive impact that CGM can have on people with diabetes on insulin, including those with type 2. These results are important given that evidence supporting the use of CGM in people with type 2 diabetes has previously been limited.

If you have type 2 diabetes and are on insulin, talk to your healthcare provider about how you may benefit from using a CGM. To learn more about the benefits of CGM and which devices are currently available, check out some of diaTribe’s resources: