Intarcia Therapeutics just released the latest data from its phase 3 FREEDOM-1 trial of ITCA-650, a small implanted device to treat type 2 diabetes. The tiny device is implanted under the skin for three or six months and continuously releases exenatide (a GLP-1 agonist) through a small mini-pump. For the overall study population, the average drop in A1c using ITCA-650 was 1.4%-1.5% after 39 weeks (from a starting A1c of 8.4%). Additionally, within a group of patients with a very high starting A1c of 10.8%, the average drop in A1c was a highly impressive 3.4% after 24 weeks. 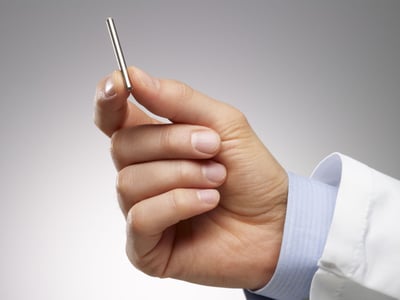 ITCA-650’s side effect profile in the trial looked quite promising. Only about 15% of participants experienced nausea during the first week of treatment, but later in the study the participants on ITCA-650 experienced essentially the same level of nausea as did those on placebo. The ITCA-650 group also lost an average of 4 kg (~9 lbs), compared to the 2 kg (~4 kg) lost on average by those on placebo.

At the 2014 ADA Conference, we had a chance to see the insertion and removal procedure for ITCA-650. Both looked simple (which is critical, of course, to patients and healthcare providers!) – the insertion took a matter of minutes and removal a matter of seconds. The device is implanted through a tiny, 4 mm incision using a small insertion device. No stitches are needed, and the incision can be covered with a Band-Aid! Intarcia expects to share full results from the FREEDOM-1 trial at ADA 2015 this June, and an FDA submission of ITCA-650 is expected for early 2016. That means the device could be on the market as soon as 2017, depending on how the FDA review goes. –AJW/MV