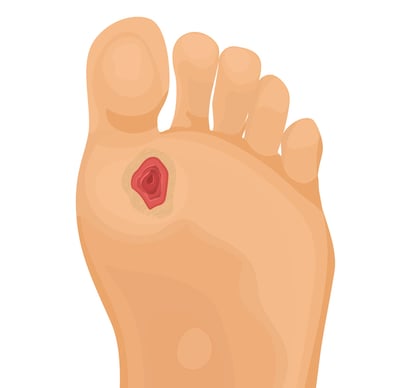 Diabetic foot ulcers are a serious complication of diabetes that start out as a small cut or blister and do not heal due to poor blood circulation, high glucose levels, and other factors. There are several treatments for foot ulcers, including a new method being investigated in a clinical trial that you may be able to join.

What is a diabetic foot ulcer?

A diabetic foot ulcer (DFU) is an open sore or wound, most commonly on the bottom of the foot, that will not heal on its own without medical care. Untreated DFUs are one of the main reasons why diabetes is one of the leading causes of amputation in the United States. The good news is that DFUs are both preventable and treatable.

How do diabetic foot ulcers form?

One of the most common complications of diabetes is neuropathy, or nerve damage. Neuropathy often damages the nerves in the hands and feet, which can prevent people with diabetes from feeling a small scrape, cut, or blister when it first occurs.

Though an injury to the foot can start out as a small scrape, having diabetes affects the body’s ability to heal even these small injuries. This is due to a combination of factors including:

This can lead to the formation of what is known as a “complex” or “chronic” wound. The most common complex wounds affecting people with diabetes are DFUs, which can increase the risk of amputation.

“Generally when people talk about complex wounds, it means a wound that has a hard time closing on its own,” said Dr. Nikolai Sopko, chief scientific officer at PolarityTE, the developer of SkinTE, a treatment for foot wounds that may be more effective than current treatments for healing open wounds. A clinical trial is now recruiting participants who have developed a DFU to investigate SkinTE (more on this trial below).

“A diabetic foot ulcer essentially starts out as a blister, but you can’t feel that it hurts because the nerves are impaired,” he said. “Diabetes can also impair [blood supply] to the foot, so on top of developing a [wound] that you can’t feel, your skin doesn’t have all the blood it needs to enact a repair response.”

Sopko explained that after a wound has been opened for more than a month, it becomes a chronic wound. At this point, the skin around the wound can become inflamed or infected, which makes it more difficult for the wound to heal.

Because DFUs often occur on the bottom of the foot, the healing process can prevent people from staying active and putting weight on their feet, which can be especially frustrating due to the pain and effects on overall mobility. Getting treatment as early as possible can lead to quicker healing time, improved quality of life, significantly lower risk for amputation, and lower healthcare costs.

“Current treatments [for DFUs] are what we call ‘advanced wound dressings’ that have a major goal of trying to rekindle the skin’s healing response,” said Sopko.

According to Sopko, these dressings most commonly include collagen, a type of protein found in the skin. Other dressings include different gels, ointments, or absorbent foams, depending on whether the wound is draining fluid or dry.

Treatments vary based on the individual, and might also include taking antibiotics to fight infection, keeping weight off the wound (offloading), or having a “revascularization” procedure – this restores blood flow to the foot if circulation has been affected significantly.

If you or a loved one notice an open sore on your foot, or even a small cut that you don’t feel, talk to a healthcare provider as soon as possible.

While several treatments currently exist that can help with the healing process, SkinTE might offer a quicker and more effective treatment for people who have developed a DFU.

“One of the issues we realized with these advanced wound dressings is they are still reliant on that wound to enact healing [on its own]. However, a lot of these chronic wounds we would call ‘biologically bankrupt,’ and can’t go into high gear to heal the wound. It would be like riding a horse across the country and then trying to get it to sprint.”

SkinTE, on the other hand, works by using a sample of healthy skin tissue from a different part of the body. “Importantly, we are taking this from [a part of the body with] healthy skin, so we’re not creating another wound to treat a wound. This heals very quickly,” said Sopko.

He explained that for people who have received the SkinTE treatment, a small piece of skin (roughly the size of a quarter) is sent to the PolarityTE facility, where it is processed into a paste that can be applied directly onto a DFU.

“When you spread SkinTE onto the wound, because it’s the patient’s own skin cells, the cells are able to engraft within that wound bed,” said Sopko.

PolarityTE published results earlier in 2022 from its first clinical trial for SkinTE, which included 100 participants with a DFU. The study found that 72% of wounds treated with SkinTE fully closed by the end of the 12-week trial, compared to only 32% that were treated with the current standard of care for DFUs.

Sopko added that even in the cases where DFUs did not heal completely, SkinTE helped accelerate the healing process.

“What was really impressive in that trial, is that we also looked at percent area reduction (PAR), which is the percentage that the wound closed over time,” he said. “With SkinTE, we saw that in the first four weeks [and at eight and twelve weeks], we had a dramatic increase in PAR [compared to the standard of care]. That was confirmation that SkinTE is working by a different mechanism and we get that immediate boost for the wound healing.”

In order for SkinTE to be approved by the FDA, the company must run another clinical trial to confirm its effectiveness. This trial is actively recruiting participants in thirteen locations across the United States in California, Florida, Illinois, New York, Massachusetts, Texas, and Utah.

For more information about this trial and to see how you can get involved, visit the clinical trials.gov page for the study or contact the researchers directly by calling 800-653-8031, or email [email protected].

For more information about diabetic foot ulcers and protecting your feet, read Diabetes and Foot Health.