Accu-Chek Guide BGM Available in the US, Including Cheaper Strips 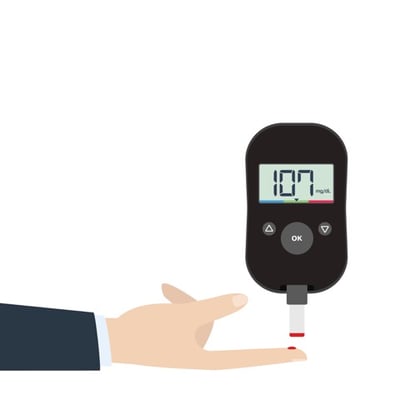 The Accu-Chek Guide blood glucose meter (BGM) from Roche is now available in the US, featuring Bluetooth integration with smartphone apps, new highly accurate strips, and a new SimplePay savings card to save money and get a free meter.

Most notably, Roche has significantly dropped the price of strips for those paying cash (without insurance): the first vial of 50 strips costs $19.99, and each additional 50 strips cost an extra $10. That means $29.99 for 100 strips and $39.99 for 150 strips, all the way up to $129.99 for 600 strips. For US readers, even for people with insurance, this SimplePay program could be a better deal than dealing with insurance hassles and copays. Those covered by Medicare or Medicaid can’t use SimplePay, though Medicare Part B and several major Medicare Advantage plans do cover Accu-Chek Guide strips.

The strips are also highly accurate, as 95% of measured glucose values fall within 10% or 10 mg/dl of the lab reference value – far better than many meters. Blood can be applied anywhere on the end of the strip, rather than only to a narrow fill window. Last, the strips come in an interesting “SmartPack” vial designed to be spill-resistant. diaTribe has given these a try and we think they’re a big improvement over previous Roche strips. 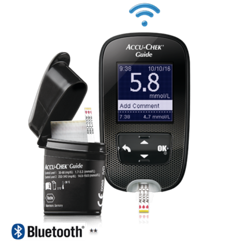 On the design front, the no frills Bluetooth-enabled meter uploads readings to the Accu-Chek Connect smartphone app (available for iOS and Android devices), which features a built-in bolus advisor once activated by a healthcare provider (see diaTribe’s Test Drive of the app here). The meter also has a port light that comes on automatically for nighttime testing, something many meters still don’t do.

In addition to syncing with the Accu-Chek Connect app, Accu-Chek Guide also integrates with the popular diabetes app, mySugr. For US users, mySugr offers a voucher for a free Accu-Chek Guide meter and a free upgrade to mySugr Pro – this can be done within the app. Glooko is also in the process of integrating with Accu-Chek Guide, and Roche has established an exclusive partnership with Medtronic to supply a version of Accu-Chek Guide to future Bluetooth-enabled Medtronic pumps.