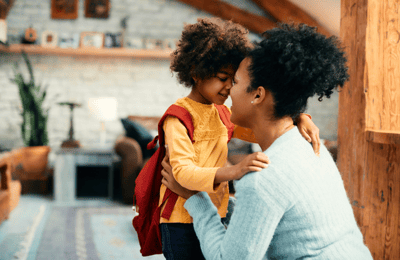 "Mom, are you glad I don’t have diabetes?” It can be emotionally challenging to parent with diabetes and find the right way to talk with your child about the condition. Hear real-life accounts from parents with diabetes – candid portrayals of both the highs and the lows.

When she was younger, my daughter called it “diabeedles.” My son thought it was called “diabeebees” for a long time. No matter how you pronounce it, diabetes has definitely influenced the way I parent.

Explaining and managing my diabetes means opening up a layer of my own vulnerability to my kids, letting them in early on the secret that parents are human, too. They know I have high and low blood sugars, they know that I need insulin to survive, and they have become aware that parents are not perfect.

Explaining Diabetes to my Kids

During my article search, I came across a piece exploring how having a parent with T1D influenced the experiences of Norwegian children ages 5 to 8 years. I was struck by one of the article’s conclusions, that “children are embodied health care actors who also will try to make sense of their parent's illness. When a parent suffers from a chronic illness like T1D, children should be understood as participants and agents who shape, and are shaped by, their environments.”

That agency is exactly what I’m aiming for when it comes to my own children; I want them to feel like they can ask questions and talk about how diabetes influences their lives. It has always been important to me that they know what diabetes is (keeping the information as age-appropriate as possible) and how this disease plays out in our day-to-day lives.

There is a fine line between what I will and won’t disclose to my kids as it relates to diabetes. I remember when both of my kids were very young; they knew why I needed to wear my diabetes devices, like my insulin pump and my CGM sensor, and they knew that juice and fruit snacks were sometimes used to treat low blood sugars. As they have both gotten older (my son is almost 6 and my daughter is 12), they understand more of the subtleties of diabetes, but I’m still working to protect them from the long-term concerns. I don’t talk about diabetes complications with my kids, or any fears I have related to diabetes, because I am unsure how to walk that line between “it’s serious” and “it’s nothing to be scared of” while managing all the in-between feelings.

(For those who haven't seen the movie, Steel Magnolias is a film from the late 80s that tells the story of a woman with diabetes who pursues a pregnancy, and how it affects her family. It's accurate for the time, which is to say that it made pregnancy seem like an enormous risk for people with diabetes.)

Through blogging and the stories told in the diabetes online community, I found many other parents who were raising kids while managing their own diabetes. These narratives brought so many of us together and provided perspective on how advancements in diabetes care and technology made pregnancy feel safe and viable. I keep in touch with a lot of these parents, so when I was looking for parenting perspectives, I had a whole community of people to ask.

While many parents were happy to share their perspectives, some requested their full names not be used.

“I do believe my kids have developed more empathy and compassion towards people who look different because their mom is different,” said Viktoryia Schnose, who was diagnosed with diabetes in 2001.

Faye Silag, mother of two living in San Francisco, said: “[There are] definitely the lows that contribute to lost sleep and lost playtime, then having to hand off the toddler to someone else because I can’t take care of her. Our older one knows to grab gummy bears or fruit snacks when I’m low, but for the most part, I’ve tried to shield her from the ugliness of it.”

This desire to shield felt familiar to other parents who were adding their comments to the social media threads.

Stacey Trimble, diagnosed with diabetes at the age of 8. said, “I honestly hate the level of stress it puts on my kid.” Stacey lives in South Carolina and is the mother of one middle school-aged child.  “I realize she knows nothing different but I remember her being so tiny and getting me the heavier-than-she-was container of juice from the refrigerator and sitting on the floor with my hubs on speaker phone, while I tried to recover from a low.”

Alexis Hauptman from Portland, Oregon, who was diagnosed with diabetes at age 10, has a 7-year-old son and a 3-year-old son. She shared a similar sentiment, also adding, “But the day my older son asked if he would have diabetes when he grew up and started to cry was a day I wasn’t prepared for. I didn’t know how to explain “maybe you will and still be a comforting mom. And unexpectedly, I felt guilty! Like if he did get diagnosed one day, I would be to blame entirely.”

Hauptman's comment made me replay a conversation I've had with my daughter when she was very small. She turned to me one day and said, "Mom, are you glad I don’t have diabetes?”

“I am glad you are exactly who you are,” I told her. "If you ever get diabetes, we’ll handle it. When it comes to cookies, we’re the toughest.” Although I was smiling, I was fully aware she could probably see my heartbeat through my shirt.

This fear we as parents with diabetes are fully aware of, but don’t often look directly at, was articulated by Michelle Price, mother of three from New Jersey. She said, “I don’t know; I worry most about diabetes taking me from them. I try to keep my numbers ‘perfect,’ whatever that means. I don’t want my boys raised without their mom.”  A pause. “I’ve never really shared that.”

Feelings of diabetes-related guilt and stress came through in many of the responses from parents. Many parents I spoke with were worried about passing diabetes along to their children, or having a low blood sugar that would leave them unconscious, as well as concerns that their children are worried about them, the parents.

Kirstin T., who asked that her last name not be printed in full, shared, “As a parent of 3-and-a-half-year-old twins, I just feel that diabetes constantly interrupts or pierces every moment with them. I’ve got videos of my daughter laughing for the first time, yet it’s punctuated with the noise of my pump beeping to say my blood sugar is dipping.”

This comment really threw me because she highlighted something I have noticed in the back of my mind but never fully realized - so many of my kids' moments on video have the distinct diabetes beep in the background.

“Lows while taking care of a child bring on a whole new level of anxiety, fragility, and then guilt,” added Ken Rodenheiser, who lives in Pennsylvania with his wife and daughter. He was diagnosed in 2003.

Peer support goes a very long way when it comes to identifying and managing the emotions of parenting. Just as parenting groups are terrific for helping new parents find their way together, the same goes for parenting groups for parents with diabetes. It's a niche of a niche, and necessary. What other group understands better when you admit that you had to steal your kids juice box to treat your low blood sugar?

Finding people who “get it” helps turn down the heat on diabetes-related worry. When another mother, who wished not to be named, mentioned her concern about not being there for her sons, I felt that comment in my gut, but it was comforting to know that I wasn’t alone with those thoughts. Fellow parents also find a way to laugh about the things that feel the most awkward, or the heaviest.

Some of the diabetes-specific situations are downright silly, and generate the kind of belly laughs that only fellow parents with diabetes can understand.

“I know a fellow Sugar Mama [mom with diabetes] whose kid uses a clump of used pump reservoirs as his lovies,” another mother told me.

Texas resident Jess Vesey, diagnosed in 2010 shared, “My daughter calls my CGM my ‘button’ and we play a game where if she presses it, I pretend to be electrocuted.” She inserted the shrug emoji into her comment. “Got to make it fun somehow.”

That kind of macabre humor might seem too dark for some, but it made me laugh. Sometimes you need to find the humor in these experiences in order to keep your sense of self intact. That goes for parenting with diabetes, or just parenting in general. Being part of a community helps you raise kids with confidence, and diabetes becomes part of that whole experience.

My favorite comment of all came from my friend Amy Gonsalves, diagnosed in 1988, whose son misheard one, small diabetes detail.

“Zero things ever have or will beat your kid thinking it is ‘tae kwon diabetes.’ I know I should correct him, but would you?”

Wouldn’t dream of it.

Read more in our article, A Child of Diabetes, where Terrisha Buckley reflects on her childhood experience with two parents who were diagnosed with diabetes.