How I Became Stronger than a Steel Magnolia 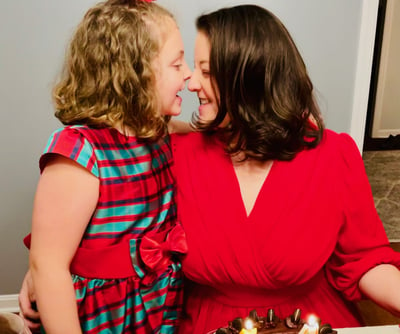 diaTribe’s Director of Institutional Giving, Julie Heverly, shares the story of how misinformation and doubt challenged her to rethink pregnancy with type 1 diabetes, and how she was empowered to start a family.

“Do you REALLY think it’s worth the risk to you, and the risk that the child could develop diabetes some day? Why wouldn’t you just adopt?”

There I was sitting on stage with my endocrinologist, participating in a “patient Q&A” for medical school students during their endocrinology rotation at Thomas Jefferson University in Philadelphia, PA. I had just shared my hope of becoming a mother and this was the question I received from one of the students in the audience. A combination of self-doubt, frustration and fear started to rise inside me.

In 2009, I lost my dad to a fatal stroke at the age of 62. Within months of his tragic passing, I doubled down on my efforts to improve my own health and started building my life the way I wanted it to look. This meant establishing a healthcare team that understood my goals and that was willing to work alongside me. For the first 14 months that I lived in Philadelphia, I did not have that experience with my health care providers. Luckily, I had recently discovered the diabetes online community and with their help, I quickly and successfully found an endocrinologist and a team that was a much better fit for me.

After a year of working with Dr. Serge Jabbour, we had developed a strong relationship built on honesty and respect. He invited me to have a candid conversation with his endocrinology rotation students, where they could ask me anything – from, “Did you drink alcohol in college and how did it effect your diabetes?” to, “What’s the craziest thing anyone has assumed about your diabetes” – and that I would answer their questions truthfully. I was flattered by the invitation and accepted.

The day of the patient Q&A, I sat on that stage, acutely aware of America’s shortage of endocrinologists. Part of me just wanted them to like me. I felt obligated to persuade them to become endocrinologists and help others with diabetes. But then I received that horribly misguided question about wanting to have children, and the other part of me decided I wanted to walk right into that audience and slap this kid across his face.

For most of my life, I was not what you consider a “baby person.” I had little affinity for what I associated with infants – dirty diapers, spit up and baby-talk. But what I liked even less was someone (or something) limiting my options. This student and his hypothetical question filled me with doubt and the fear I had experienced at the beginning of my diagnosis.

At the end of my junior year at Washington & Jefferson College, I began experiencing blurred vision and extreme thirst. My alma mater is renowned for its pre-med program, which meant even my friends were trying to diagnose me like it was their final project for the semester. A few weeks later, lab work proved that one of them was right. I had diabetes.

At the time of my diagnosis, I did not know a single person my age living with type 1 diabetes. So, like any college kid would, I turned to Hollywood and the film Steel Magnolias in particular. The film is about family, friendship, and the strength of love. At the center of the story is a young woman named Shelby with type 1 diabetes who dreams of getting married and having children, but is told by those around her not to follow that dream – and when she does, the outcome for her is grim.

The story of Steel Magnolias is based on the family experience of its screenwriter, Robert Harling. His sister had diabetes in the 1970s and 1980s before the enhanced medicines and technologies that are available today. But at the beginning of my diagnosis, I didn’t have access to them either. Like Shelby, I was a young woman with type 1 diabetes, who was thinking about marriage and wanted the option to start a family. Doubt crept in and I worried for years that Shelby’s story was my story too.

It seemed to be. In 2001, my husband and I were married and after a few years of wedded bliss, the idea of a family started to bloom. For eight years, we were told by countless medical professionals that a pregnancy would be too dangerous for both myself and the baby. Sitting in this auditorium was another prospective doctor reinforcing that doubt and limiting my options.

But on that stage, sitting next to me, was the first doctor who gave me hope. Dr. Jabbour was the first one to tell me that a healthy pregnancy was not only possible but also that we would make it happen. As we sat together on the stage talking to those students, I believed in him as much as he believed in me. And so, my soliloquy began:

“I was diagnosed with type 1 diabetes at the age of 21 due to a virus that attacked my pancreas. I have no family history of type 1 and therefore the chances of any of my children developing diabetes are only slightly higher than anyone in the general public being diagnosed with it.”

“But if I were to have a child, and that child was diagnosed with diabetes, who would know better about what they’re going through? Who would spot it first? Who would be able to help them navigate the daily trials and tribulations better than me?”

My confidence was growing, so I continued, “What I have to offer a child, in love, knowledge, experience, and faith far surpasses any burden that diabetes could place on our family, community or health care system.”

I finished by saying, “I hope you all decide to become endocrinologists – we need a lot more of them – but more so, I hope whatever field you do choose, you help your patients be healthy enough to live their best lives.”

In the moment of silence after I stopped talking, Dr. Jabbour reached over and squeezed my hand and said, “This is exactly why I asked you to speak to them today. Thank you.”

Dr. Jabbour believed in me and together we worked to get my A1C below 6% so that when the time came, I could have a healthy pregnancy. And about a year after this Q&A panel, I delivered a healthy baby girl.

Today, my daughter is thriving, strong, smart and one of the most empathetic eight-year-old diabetes advocates I’ve ever met. Her pancreas is healthy and functioning, but even so, she still lives with diabetes. It’s part of our life, our story, our fabric. We work as a family to support people living with diabetes, to educate people, fund research, and end the stigma that surrounds it.

Thanks to the many advancements in diabetes management options, women with type 1 diabetes are having healthy pregnancies just like mine. There may always be risks associated with pregnancy and type 1, but they are not insurmountable. An insulin pump and continuous glucose monitoring system, weekly uploads and adjustments with my diabetes educator, and a healthy nutrition plan and regular exercise were at the core of my pregnancy experience.

My story was not and is not Shelby’s story from Steel Magnolias. The day I realized that truth, everything changed for me. I overcame that doubt slowly, but only because other type 1 moms shared their stories and those stories empowered me to create my own story. I’m so grateful to Kerri Sparling for her Six Until Me blog. By sharing the challenges and victories of her pregnancy experience, Kerri helped me see there was a story different than Shelby’s. For years, I kept an article from Diabetes Forecast featuring 1999’s Miss America, Nicole Johnson, and her story about starting her family. Through social media, I have watched both Kerri and Nicole’s daughters grow into beautiful young ladies with their mothers right next to them. That is my hope; that is what I work to continue creating every single day with family.

My advice? Assemble a healthcare team that is onboard with your vision, that wants to help you succeed with a healthy pregnancy, and that you will be comfortable spending a lot of time with. It is hard work, but it’s 100% worth it.