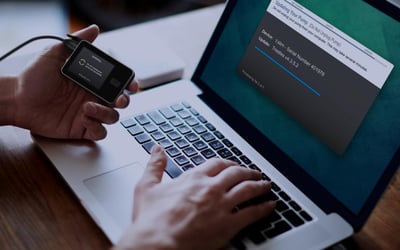 After a month of her daughter using Control-IQ, Katie Bacon reviews the pros and cons of the algorithm and shares her family’s tips and takeaways

When the email came through in early April that our daughter, Bisi, could now download the software to run Control-IQ on her t:slim insulin pump, the timing seemed perfect. After all, our family was staying at home due to COVID-19, so we had plenty of time together to do the training and figure out the new system and how it worked for Bisi and her blood glucose levels. Plus, from everything I’d read about COVID, keeping blood sugars as stable as possible was more important than ever, and it seemed like Control-IQ could help us with that. (The Control-IQ algorithm uses data from Dexcom’s CGM to lower insulin delivery when a low is predicted and to increase insulin when a high is predicted – learn more about Control-IQ here.)

Bisi has now been on the new system for about a month, and while it hasn’t been a magic bullet and we’re still learning, Control-IQ has improved Bisi’s time in range by about 5% (and we’re hopeful that her time in range will continue to improve). Also, even more importantly, it’s improved her quality of life – and ours, as the parents who watch out for her. When I sat down with Bisi recently to ask her about the change, I got her perspective on the burden she feels diabetes has placed on her ­– and the power of Control-IQ to lighten that load. She told me that before using Control-IQ, at any given time 30-40% of her focus was on diabetes. I was taken aback by this percentage, since Mark (my husband) and I have always tried to take some of the weight for her. As she told me, “It feels demanding, like a lot of pressure, as if someone’s poking my head.” But with Control-IQ, she says, she doesn’t need to worry about much except bolusing insulin at mealtime. She has fewer highs, fewer lows, and she says she feels better physically than she did before. “For as long as I can remember, diabetes has been a main focus of my life, but it really shouldn’t be that way. So it’s been nice not to focus on it as much,” she said.

In terms of what Bisi has experienced over the past few weeks since switching to Control-IQ, I’ve divided my thoughts into the pros and cons of the system as we’ve experienced it; I’ve also included tips drawn from what we’ve learned from Bisi’s endocrinologist and DCES.

Thoughts and Tips for using Control-IQ:

Even though we still feel like we have more work to do in terms of getting the best out of the new algorithm, Control-IQ has improved Bisi’s life in important ways. As Bisi’s endocrinologist told us, “It’s not perfect, and you need to think more about active insulin than you did before. But the goal with this is to have diabetes interrupt your life less than it did before.” For Bisi, the important aim of staying in range now requires less mental effort. As she said recently when looking at her CGM graph after 24 hours of Control-IQ: “This is pure gold.”

Katie Bacon
Katie Bacon is a writer and editor based in Boston. Her daughter was diagnosed with type 1 diabetes in August, 2012, when she was six. Katie’s writing about diabetes has... Read the full bio »