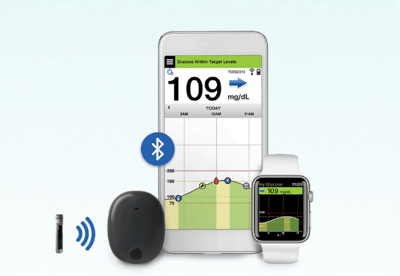 First implantable CGM available in the US! Eversense is expected to launch July 2018

The FDA has approved Eversense for users 18 years and older, and the first US insertions are expected this month. Eversense is very accurate, but it does requires two fingerstick calibrations per day, unlike the no-calibration Dexcom G6 and Abbott FreeStyle Libre; it is not approved for insulin dosing.

We have heard many positive things from Eversense users in Europe:

The system is compatible with Android and Apple devices. Glucose readings are sent to the smartphone app every five minutes from the on-body transmitter. There is no separate receiver for Eversense – the smartphone app is the only way to view data.

Pricing for the system is expected to be similar to other CGMs in the US. According to Senseonics, there will be “some insurance coverage” within 2018 and “the majority” in the next two years.

This expected approval comes after a unanimously positive March FDA advisory panel, where health professionals, patient advocates, and study participants strongly argued for approval (diaTribe included). We are excited to see FDA approve a new CGM option in the United States and look forward to an upcoming study this summer for the 180-day Eversense XL version, which has already been approved in Europe.