Medicaid Expansion: What Is It, and How Does It Impact Diabetes Care?

For many people with diabetes, basic insurance coverage is critical to living a life free of complications. Medicaid, a program supported by federal and state governments, provides this coverage to individuals with limited income and resources who otherwise might not be able to afford diabetes care. Medicaid covers 67 million low-income adults, children, pregnant women, elderly, and people with disabilities – that’s one in five Americans.

What is Medicaid expansion?

The Affordable Care Act’s Medicaid expansion, initiated on January 1, 2014, has contributed to a significant reduction in the number of uninsured Americans, falling from 44 million in 2013 to under 28 million by the end of 2016. The fact that there is still this number of uninsured is very worrisome from our view. In 2014, 29 states and Washington DC opted to expand the Medicaid program to include individuals at up to 138% of the federal poverty level. In states without expansion, many individuals below the poverty line neither qualify for Medicaid nor are able to afford a subsidized private health plan through the Health Insurance Marketplace. The expansion of Medicaid eligibility provides a continuum of health insurance coverage options that seek to eliminate this coverage gap. In fact, there are an additional 4.2 million uninsured Americans who would be granted Medicaid eligibility if the current 17 non-expansion states elected to expand. 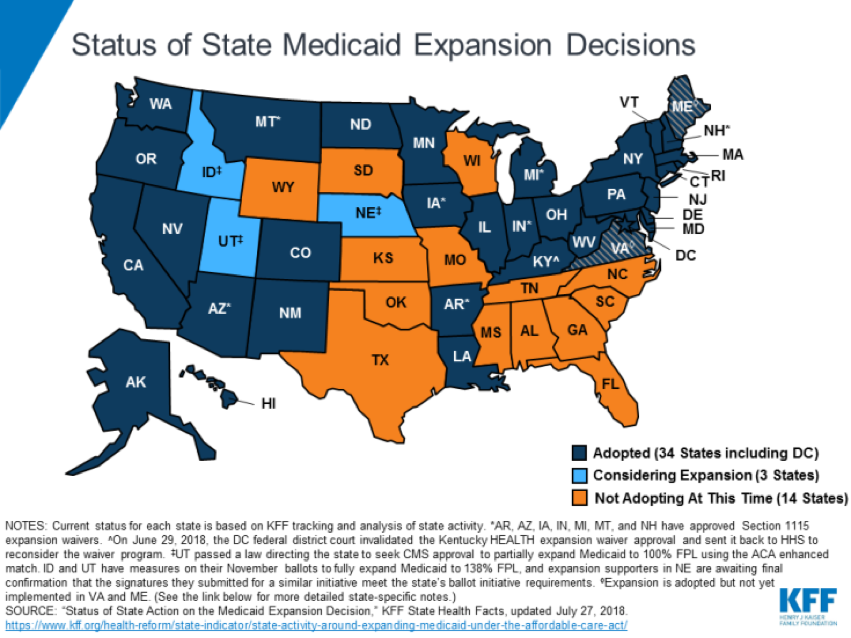 Results from a recent study published in Health Affairs suggest that increased insurance coverage provided by state Medicaid expansion has improved access to diabetes medications. Researchers observed that the number of prescriptions for both insulin and newer diabetes medications increased by about 40% in 2014 and 2015 in states that opted to expand Medicaid. During this time, no such increase was observed in states that elected not to expand Medicaid coverage. Furthermore, the expansion was associated with an additional 30 diabetes prescriptions (covered by Medicaid) filled per 1,000 people when compared to non-expansion states. These data show that increased insurance coverage provided by state Medicaid expansion was associated with improved access to these medications. This is particularly noteworthy considering that these changes were observed in just two years after the expansion of coverage – as the study authors point out, these effects will likely increase with time.

After gaining Medicaid coverage, an individual’s out-of-pocket expenses for diabetes medications are significantly reduced. Increased insurance coverage enables more people to afford their needed medications. “In the long run, preventing diabetes complications not only saves lives, but it improves public health and saves public money,” said Dr. Michael Bush, president of the California chapter of the American Association of Clinical Endocrinologists. In fact, the study mentions that diabetes treatment for just one individual can reduce health care costs by $6,394. The results suggest that there are millions of currently uninsured Americans who are going without much needed diabetes medications, and that increased insurance coverage (through the adoption of Medicaid expansion by more states) would significantly improve access to these medications.

How can I get involved?

This article affects those in the United States. Even US residents that are not affected by the direct access that Medicaid expansion provides are affected by their state’s short and long-term healthcare expenditures. Many voters will be able to voice their opinion on Medicaid expansion this November during midterm elections. Idaho, Nebraska, and Utah will all have ballot initiatives to expand Medicaid, and elections for 13 governors in non-expansion states could determine whether expansion moves forward - diaTribe will be advocating for expansion, of course, as this is particularly relevant for people with diabetes. In particular, tight gubernatorial races in Florida and Maine are drawing attention, since new leadership could usher in expansion. We’ll update this page as we learn more.