Google and Dexcom Team Up to Dramatically Improve CGM

In breaking news, Dexcom and Google just announced today that they have joined forces to develop a next generation of continuous glucose monitors (CGM) that will be smaller and less expensive than current offerings. We learned from Dexcom’s conference call this morning that the vision is a flexible, low-cost, bandage-like, disposable CGM product (approximately the size of a dime!) worn for 10-14 days. It would likely communicate to a nearby smartphone app, allowing very convenient viewing of glucose data. The goal is for a first version to launch in two to three years, with a follow-up product to come out within five years. We aren’t sure yet if this device would require fingerstick calibrations, or whether it would display different data than current CGM offerings (i.e., real-time glucose value every five minutes, trend arrow). We are following up with the companies for more details.

The agreement leverages Dexcom’s industry-leading CGM sensor accuracy with Google’s expertise in miniaturizing electronics and data analytics. Google’s background having five different technology platforms (Google search, YouTube, Android, Chrome, and Google Maps) each with over one billion users unquestionably brings tremendous potential to better use data and create an amazing user experience. Dexcom ultimately hopes these next-generation products could make CGM more user-friendly and less obtrusive, helping to extend the technology into more type 1 patients and far beyond into type 2 diabetes, hospitals, gestational diabetes, and perhaps even prediabetes. (Wouldn’t it be amazing if anyone at risk for diabetes could pick up a Dexcom/Google CGM bandage at Walgreens and get real-time CGM data and know their risk without waiting for a blood test? That is speculation on our part, but perhaps not so far fetched based on what we heard today.)

This new partnership has the potential to meaningfully expand the number of patients using continuous glucose monitoring, particularly for those with type 2 diabetes. According to diabetes market research company dQ&A, both type 1 and type 2 diabetes patients cite three major barriers that prevent them from using CGM: (i) having a device attached to their body, or having to carry around another device; (ii) high out-of-pocket costs; and (iii) hassle factor. While it’s too soon to know exactly how small this new Dexcom/Google product will be, or what it will cost, we have high hopes given the collective brainpower of these two impressive companies and the stellar leadership behind them (including Dexcom CEO, Kevin Sayer and Head of Life Sciences at Google, Andrew Conrad). 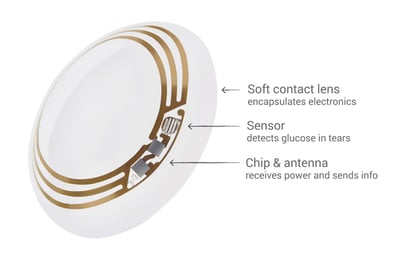 For context, Google first publically entered the diabetes scene back in January of 2014, when it announced its ambitious venture to develop a contact lens that could non-invasively monitor glucose levels from tears. Later that year, Google then teamed up with Novartis – bringing expertise from the eye-care field – to help make this product a reality. Google secured a patent for the device in April of this year, though it’s still likely several years away from commercialization. This new Dexcom agreement is separate from the contact lens project. It's certainly encouraging to see Google investing in diabetes with these two partnerships, and Dexcom's management continues to impress with the speed at which they moved to make this agreement a reality, as we understand this deal was put together in a relatively short period of time. –AB/AJW/KC