Keeping Your Heart and Kidneys Healthy When You Have Diabetes 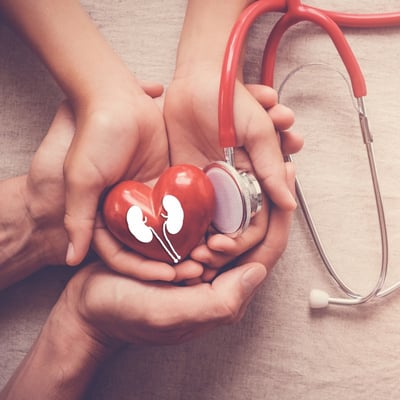 People with type 2 diabetes have a higher risk of developing heart and kidney disease. Know how to identify the risk factors common to both conditions and protect yourself from these complications.

For much of the last century, healthcare providers have focused on glucose management as the main treatment goal for people with type 2 diabetes. About 20 years ago, it became apparent that controlling blood pressure and cholesterol were also important. New medications have more recently become available that have shown proven benefit for two of the most common complications of diabetes: cardiovascular (heart) disease and chronic kidney disease (CKD).

In diaTribe’s latest Musings panel, “New Tools to Keep Your Heart and Kidneys Healthy,” two endocrinologists, a cardiologist, and a patient advocate gathered to discuss the latest strategies to treat and prevent these complications.

You can watch the panel here.

Speakers on the panel included:

The panel was moderated by Amy Tenderich, founder and editor-in-chief of DiabetesMine, who has type 1 diabetes.

The discussion began as the experts explained the connection between heart disease, kidney disease, and type 2 diabetes. All are driven by a similar set of conditions, which, together, are called “cardiometabolic disease.”

“When we talk about cardiometabolic disease, we are talking about a cluster of risk factors, including type 2 diabetes, high blood pressure, abnormal cholesterol levels, and obesity,” said Sivarajah. “When you have these interrelated risk factors, you’re predisposed to developing cardiometabolic disease. This disease can affect the heart, the kidneys, and the liver.”

“One of the key drivers of insulin resistance itself is what we call ‘visceral adiposity’, or when fat builds up around the vital organs in the body. Root causes like insulin resistance or visceral fat buildup are what can lead to downstream effects, such as inflammation, higher blood pressure, abnormal cholesterol, and high blood glucose,” said Kosiborod.

One of the biggest challenges of managing complications like heart and kidney disease is that there aren’t always clear signs that there is an issue. Kosiborod highlighted some symptoms which may be warning signs of heart disease:

Even without these symptoms, getting screened and asking questions about your heart and kidneys is important. Dalin, who has had a heart attack and kidney disease since being diagnosed with type 2 diabetes, said, “I hadn’t discussed anything [about diabetes, heart disease, and kidney disease] with anybody. I thought I was fine because everything was silent.”

“When I had a heart attack, the symptoms started the night before,” said Dalin, “but I didn’t realize they were symptoms of a heart attack until the next morning I never had shortness of breath before; I ran around quite a lot. I was in a stressful job at that point, and I had gotten to work that morning and had some of the traditional symptoms—aching in my left arm and shortness of breath. Even when it was happening, I really didn’t know about the connection between that and my diabetes diagnosis.”

To take action as early as possible and protect against kidney disease, Sivarajah provided guidance on when and how to get tested.

“With type 2 diabetes, you want to get initial screening done right at diagnosis, because likely there has been some metabolic abnormality for several years,” Sivarajah said. “The two major tests recommended are eGFR, which tells us about the kidney’s function. This is part of a routine panel. The second test is called UACR, which tells us if there is any damage in the kidney. At the time of diagnosis, you should start getting screened annually, but if you are diagnosed with CKD, we may test more frequently.”

There are several medications to help people manage their blood sugar and protect against heart and kidney disease. Seman, however, highlighted the importance of eating right and staying active, even while taking medications.

“It’s extremely important to pay attention to lifestyle. There are obviously genetic predispositions to type 2 diabetes, but much of it does have to do with gaining weight, what you eat, and being active,” said Seman. “Exercise helps make your muscles more sensitive to insulin, allowing you to use some more of that glucose in the blood. A lot of keeping yourself sensitive to insulin involves keeping your weight down and keeping processed foods out of your diet.”

Next, the discussion turned to medications. Kosiborod discussed two classes of medications, ACE inhibitors and ARBs (angiotensin-receptor blockers), which lower blood pressure and can protect against kidney complications. “Some patients may need more than one of these medications to return blood pressure to normal levels,” he said. “High blood pressure can be a silent disease for many years, so knowing your numbers is critical.”

For high cholesterol, a class of medications known as statins are recommended for people with diabetes who have high levels of LDL cholesterol, commonly known as “bad” cholesterol.

In addition to these drugs, there are two types of glucose-lowering medications that have also been shown to have positive effects on the heart and kidneys. These drug classes are called GLP-1 receptor agonists and SGLT-2 inhibitors.

“Both classes of medications are wonderful. GLP-1s and SGLT-2s do a wonderful job helping with blood sugar management, but also have a benefit of weight loss without an added risk for hypoglycemia,” Sivarajah said. “Generally, the recommendations are that for someone with type 2 diabetes who is predominantly at risk for cardiovascular disease, a GLP-1 will be most effective. For those who are most at risk for heart failure or kidney disease, a SLGT-2 will be most effective.”

Seman noted that with SGLT-2 inhibitors, the benefits almost always outweigh the risks. “In general, the side effects are relatively mild,” he said. “The biggest one we see is [urinary tract infections] or yeast infections, probably because the drugs work by excreting excess glucose through the urine. Sometimes, people can get low blood pressure and feel lightheaded, but this was seen in a very small number of patients and can be managed. In the end, reducing the progression of kidney disease and preventing hospitalization from heart failure far outweigh these medications' risks or side effects.”

The panelists wrapped up the event with a discussion on the need for greater awareness and education about the causes, symptoms, and treatments for heart disease and chronic kidney disease. In closing, Dalin summed up some of her strategies for staying positive and healthy each day to end the session.

“It starts with working with your doctor as a partner,” she said. “Any question that pops into your head, just ask. And do your homework. Not all the information out there on the internet is accurate, so it’s always best to check with your doctor if you’re not sure. The other thing I found that was important is that, to make the medications work the best, I had to change my style of eating. If I was eating a very high-carb diet, it felt like I was fighting with the medications. Once I found a way to put it all together, I started thriving, not just existing.”