LibreLink: Scanning the FreeStyle Libre Sensor Straight From A Smartphone 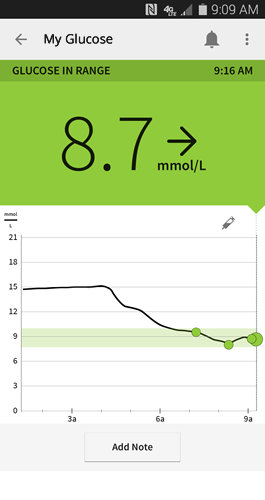 Abbott recently announced the launch of LibreLink in Sweden*, a free Android app for scanning the 14-day FreeStyle Libre sensor. This important advance eliminates the requirement for the separate touchscreen reader and further builds on the “Libre” name – freedom from fingersticks, and now, freedom from an extra device! The app is available on the Google Play store in Sweden, and Abbott told us that more European launches are planned for 2016, including France, Germany, Netherlands, Italy, Spain, and the UK. (See our previous Test Drive for background on how the 14-day, no fingersticks FreeStyle Libre system works). Currently, LibreLink is the only mobile app that has been approved to work with FreeStyle Libre sensors.

The LibreLink app, developed by AirStrip, functions just like the FreeStyle Libre reader. Once it is installed on an Android phone, a user can start a 14-day sensor and obtain real-time glucose information by briefly holding the back of the phone near the sensor, just as one would do with the reader. The app then immediately shows the current glucose reading, trend arrow, and eight-hour history. The app doesn’t have to be open to initiate the scan process – very convenient! – though the phone must be unlocked. The FreeStyle Libre sensor can only link with one device, so people must decide whether they want to use the touchscreen reader or the LibreLink app over the 14 days of wear – unfortunately, you cannot tradeoff between the two devices.

For now, LibreLink is only available for Android phones with built-in NFC (most models have this, including the popular Samsung line). An iPhone version is in the works, but there is no information on when it will be available - we imagine there will be high demand for this as as more people in the EU are buying iPhones.

What are the advantages of the LibreLink app over the reader?

One advantage of the FreeStyle Libre reader compared with LibreLink that we can think of is the frequency with which the devices need to be charged; the reader needs charging about every 4-5 days, while phones generally need to be charged daily. While we don't anticipate this being a major problem, it does increase the chance of someone being caught with no data due to a dead phone.

How does LibreLink compare to the Dexcom G5?

The FreeStyle Libre has several key differences from the Dexcom G5 Mobile System and continuous glucose monitoring in general (see our guide: How is FreeStyle Libre Different from Continuous Glucose Monitoring?). However, since both devices now offer smartphone apps that completely replace a separate handheld device, we think it’s useful to compare them. Some key points of differentiation are below. [Note: We’ve excluded Medtronic’s MiniMed Connect, since smartphone viewing requires both the pump and the separate keychain device.]

When is FreeStyle Libre coming to the US?

FreeStyle Libre Pro is a bit different from the patient version of FreeStyle Libre discussed above. The Pro version is blinded (no reader device or app) and allows physicians to get continuous glucose data from patients over a two-week period. After applying the Libre Pro sensor in the doctor’s office, it is worn for two weeks, and the sensor automatically records glucose values every 15 minutes. Patients then return to the doctor’s office, where the sensor is downloaded.

We’re hopeful that a future FDA submission of FreeStyle Libre includes the LibreLink app – many patients will appreciate the convenience and user experience advantages! –AB/AJW

* Correction: After hearing from readers in Sweden that the app is not yet publicly available, we received clarification from the team at Abbott: LibreLink has initially been launched on an invite-only basis, and will become more widely available in early 2016.