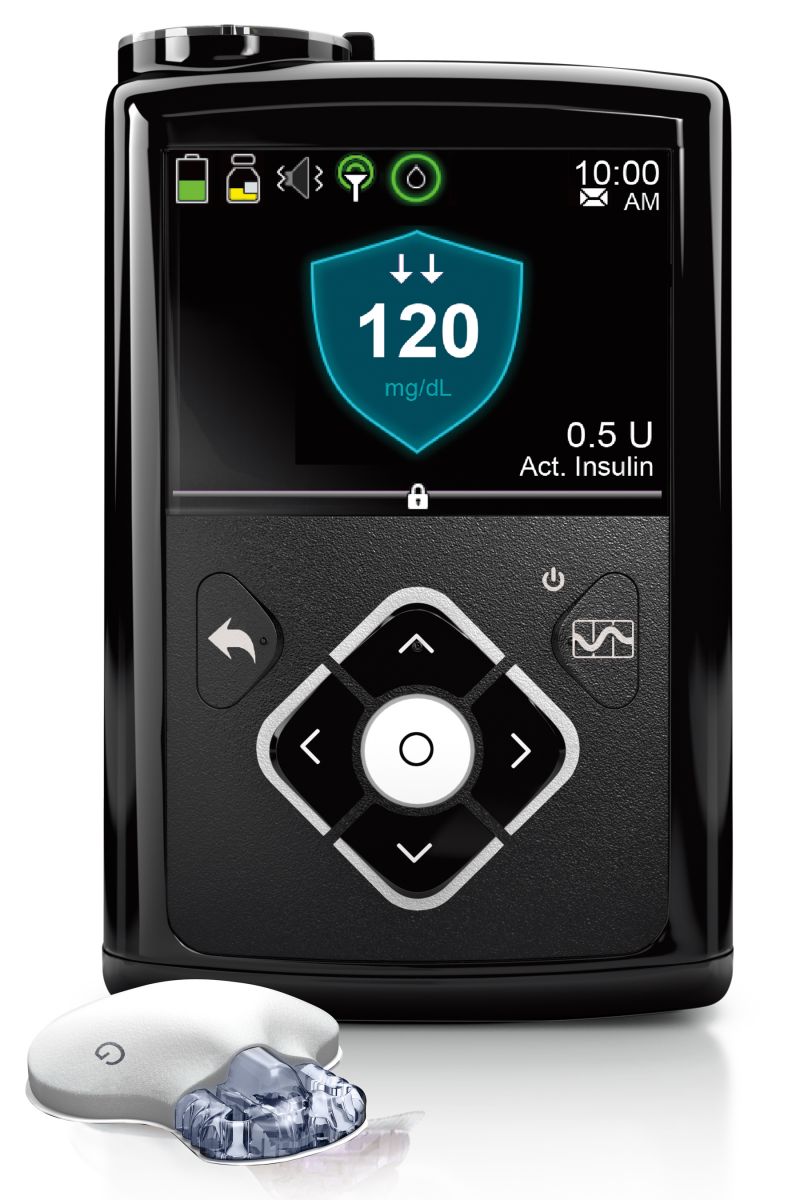 This dual reduction in A1c and hypoglycemia demonstrates the power of automating insulin delivery – shaving off lows AND highs, particularly overnight. Take note of the images below, which show the combined daily glucose profiles in adults (B) and adolescents (C) for the open loop run-in (gray) and hybrid closed-loop with the MiniMed 670G (pink). The 670G tightened the range of glucose values throughout the entire day (particularly in adolescents) and was very effective overnight in both populations.

Medtronic has submitted this system to the FDA as planned, with a US launch previously expected by April 2017. As we previously reported, of the 124 patients in the trial, a striking 80% have opted to continue using the device through the FDA’s continued access program – this demonstrates encouraging participant enthusiasm for the system, plus FDA comfort with real-world use of the device.

This represents the first pivotal trial of a fully integrated commercial product to automate insulin delivery, and it shows what a difference first-generation hybrid closed loop systems can make, even in patients doing pretty well already. Patients were already doing well at study start, though the 670G brought A1c down a further 0.5% and cut hypoglycemia by 44% – it’s rare to see both improve with a diabetes drug or device, and the results were consistent in adolescents and adults. This study enrolled current pump users, some of whom were already on a CGM; it’s not clear how people on injections would like this device. Our hope is that the 670G can really improve outcomes for those with higher A1cs (i.e., over 10%) or at high risk of severe hypoglycemia – both groups were excluded from this study. We also hope to hear more on usability of the system, as some have told us it does require a learning curve.

Notably, this wasn’t a randomized study with a parallel control group, meaning some “study effect” could be present – i.e., patients did better simply because they were in the study. Medtronic chose this design deliberately, as it wanted to complete the study as fast as possible and submit the device to the FDA.

Managing expectations will be key with the MiniMed 670G, as the system won’t do everything, and the algorithm may be conservative for some users (i.e., it may target higher average blood glucose levels than some people may prefer). How does the algorithm work? Based on the Enlite 3 CGM reading every five minutes, the pump software automatically increases or decreases basal insulin delivery to target a blood glucose of 120 mg/dl. It’s a “hybrid closed loop” because a user still needs to bolus for meals and notify the system of exercise. The 670G will NOT give automatic correction boluses based on CGM readings; that means if a meal bolus is missed, it will increase basal insulin up to a certain point to bring blood sugar down, but it won’t give a large automatic correction bolus at one time on its own (future systems will add that). Still, the automated basal insulin delivery takes care of insulin dosing in the background, which is particularly valuable at night (~80%+ time-in-range), and can help mitigate many highs and lows during the day.

Unlike many academic systems that run the closed-loop control algorithm on a smartphone, the 670G algorithm is fully integrated within the pump itself. A patient only needs to wear the Enlite 3 CGM sensor and the MiniMed 670G pump – no need to carry a separate CGM receiver or phone.

In addition to these study results, Medtronic announced some important diabetes data updates at ADA, including information on its next-gen CareLink Pro reports for providers (to help optimize pump settings), its partnerships with Glooko and IBM Watson (both launching this summer), and a new food app with Nutrino (beta app available). See below for more details on these and for additional information on the study.

Adults on the MiniMed 670G (pink) vs. Open Loop (gray). The bands depict the range of blood glucose values experienced across 24 hours in the two study periods. The solid (670G) and dashed lines (open loop) indicate the average glucose at that time point. Adults saw a slightly higher average glucose on the 670G during the day, but a narrower range overall. 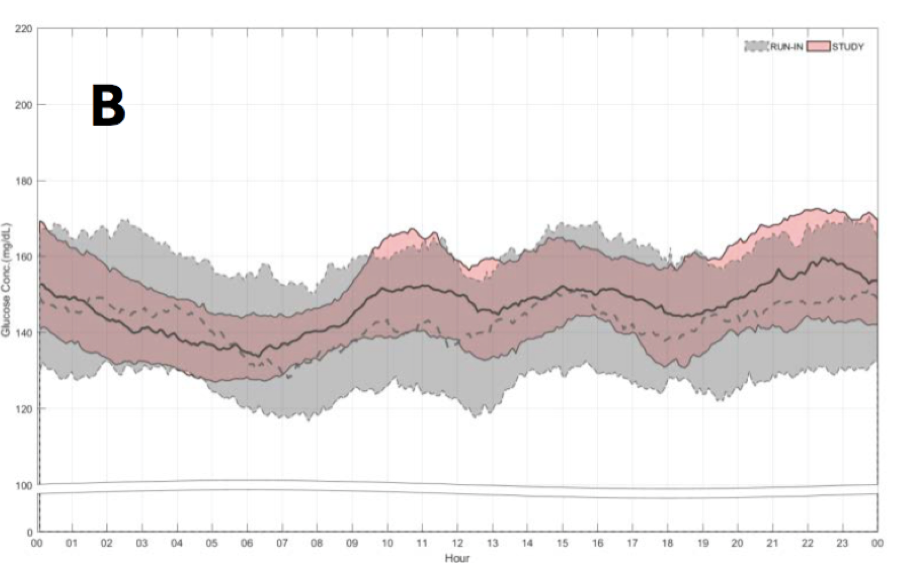 Adolescents on the MiniMed 670G (pink) vs. Open Loop (gray). The range of glucose values was much narrower overall at all time of day, particularly after breakfast. Unlike the adults, the adolescents saw a lower average glucose on the 670G at many times of day. 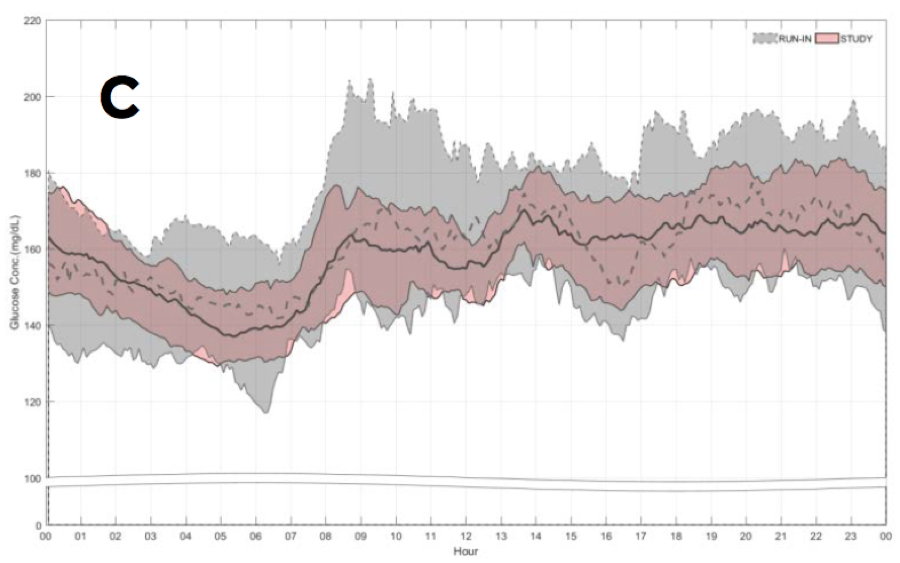 Q: What impact did the hybrid closed loop have on A1c?

A: The MiniMed 670G drove a 0.5% reduction in A1c from a low initial value of 7.4%, including a 1% A1c reduction in participants with a starting A1c of over 7.5%. The 1% improvement in those with a starting A1c above 7.5% is particularly encouraging, as it shows the potential benefit insulin automation can have on those with higher A1cs relative to current open-loop therapy.

By the end of the study, 55% of trial participants had an A1c under 7%, up from 31% at the study’s start. Inversely, that means that 45% of participants ended the six-month study with A1cs still above 7%. How is that possible? Hybrid closed loop systems won’t be perfect, since they only modulate basal insulin and still require accurate carb counting and meal boluses. If a patient misses a mealtime bolus, for instance, blood sugars will likely stay elevated for some period of time before the higher basal rate brings it back down. The next-gen version is expected to add automatic correction boluses.

Q: What impact did the hybrid closed loop have on “time-in-range,” hypoglycemia, and hyperglycemia?

A: Time-in-range (the percent of time spent between 71-180 mg/dl) improved from 67% during the two-week run-in to 72% during the study, with time under 70 mg/dl nearly halved (6% to 3%), time under 50 mg/dl declining 40% (1% to 0.6%), and time over 180 mg/dl improving moderately (27% to 25%). The results were fairly consistent across age groups, though adults saw more benefit in hypoglycemia reduction, whereas adolescents saw more benefit in reducing highs.

While the time-in-range increase may seem minor, considering the meaningful hypoglycemia reduction and the high baseline time-in-range, these results are still notable. Moreover, the hybrid closed loop system significantly reduced severe highs and lows, tightening the range of glucose values throughout the day (see above). Reducing severe highs (e.g., over 300 mg/dl) to moderate highs (e.g., 200 mg/dl) is clearly a good thing, though it won’t show up as a benefit in 70-180 mg/dl. Consistent with earlier trials, the MiniMed 670G is most impactful overnight, driving participants down to ~140 mg/dl by early morning, tightening the range of overnight values, and eliminating hypoglycemia.

Q: What was the impact on insulin dose requirements and weight gain?

A: The MiniMed 670G increased total daily dose ~7% from baseline (48 units to 51 units), though a smaller proportion of insulin was given as basal insulin. Since the MiniMed 670G only automates basal insulin delivery, the implication is that participants were taking more manual boluses on hybrid closed loop (either a larger number of doses or larger dose sizes). It is possible participants ate differently on the hybrid closed loop, which could also explain the mild weight gain seen with the system (about three pounds in adults and two pounds in adolescents).

Q: How big is the study? How was the study designed?

Participants began with a two-week “open-loop” phase during which they wore the MiniMed 670G pump + Enlite 3 CGM, but without any insulin automation. This served as the study’s baseline. After two weeks, all participants then moved to a three-month, “hybrid closed loop” phase. During this phase, participants used the system unsupervised, meaning these three months reflected “real-world” experience with the hybrid closed loop system. A one-week hotel study occurred in the middle of the 670G period, allowing a comparison between the Enlite 3 and a laboratory reference.

1) Medtronic/IBM Watson Health app, SugarWise: The app is officially named “SugarWise" (bringing insight to blood sugars) and is still expected to launch this summer for those using MiniMed Connect. The first generation app will analyze past insulin, glucose, and food data and provide insights based on the patterns it recognizes: “In the last 30 days, high glucose pattern found usually after glazed donut for breakfast.” A future-generation version will add the hypoglycemia prediction feature that Medtronic debuted at CES in January (“In the next two hours, there is a high likelihood that you will go low”).

2) Glooko compatibility: This data partnership will officially launch in July, allowing patients to download their Medtronic pump and CGM data to Glooko’s web dashboard and mobile app – a big first for Medtronic, which was previously not too open to sharing data with other platforms. We love seeing this change and think providers and patients will appreciate the greater flexibility in viewing data. Glooko will also launch a re-designed patient app that can perform pattern recognition, among other features.

3) Nutrino food app partnership: Medtronic and Nutrino launched a beta food app for customers who use MiniMed Connect, providing a picture of how food and other measures impact glucose levels – see the video here and download the app here. Nutrino imports the CGM and insulin data seamlessly from MiniMed Connect (from a Medtronic pump) and allows patients to take meal pictures, scan bar codes, carb count, and more.

4) Next-gen CareLink Pro reports are set to optimize basal and bolus settings: These will launch this summer for healthcare providers. The software will identify the optimal insulin:carb ratio, the insulin sensitivity factor, and necessary basal rate changes. Providers will get suggestions on when and how to change a particular setting. –AB/AJW