Sending Your Child to a Diabetes Camp 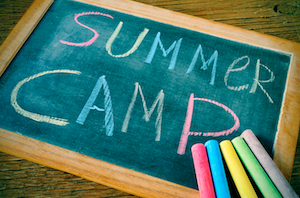 With summer quickly approaching and camp spots filling up, learn about the value of sending your child to a diabetes camp from increased independence to bonding with other children with diabetes.

Will you send your kid to camp this year?

Whether your child is recently diagnosed with diabetes or has lived with type 1 or type 2 for a while, sending him or her to summer camp can be a highlight – and not just for your kid but you as a parent, too.

“When you have a kid with diabetes, letting them out of your sight can be nerve-wracking,” said Valerie Beals, of Wilbraham, Massachusetts. “Forget overnights: who knows how to handle your child during the night if their blood sugar goes low? Who can handle giving them shots or checking their sugars or working their insulin pumps?”

Beals, whose son Jonathan was diagnosed with type 1 when he was 2 and a half, and whose daughter Jordan was similarly diagnosed at age 11, found great support at the Massachusetts-based Barton Center for Diabetes Education. Barton runs summer camps as well as weekend retreats, family camps, an adventure camp, and other outreach programs in Massachusetts, Connecticut, Vermont, New York and Maine.

“Camp is a breath for a week or two during the summer where you can send your child away and know they are taken care of by people who GET IT,” Beals said. “My kids came home exhausted and filled with pride from new accomplishments.”

Jordan, who is now 22, was a camper at Barton for three years, then worked as a counselor-in-training for a year and as a counselor for four years, both at Barton’s overnight and day camp programs.

“The best thing about camp for me was feeling normal and not feeling like an outcast,” Jordan explained. “Going to school and playing sports, I was treated differently because of having diabetes. Going to camp, you have people that know what you are going through and help give you advice for once you go back to school. It was a big family. No matter what is thrown at anyone with diabetes, we have a massive community at camp that is always willing to help if needed.”

That kind of community feeling is what compelled one father to become involved with diabetes camp when he was a parent of a newly diagnosed child. He ultimately became a devoted champion for all diabetes camps.

“When we sent our 7-year-old daughter to camp many years ago, our motivation was that she learn how to give herself an insulin shot and about how to independently manage her diabetes,” said Terry Ackley, executive director for the Diabetes Education and Camping Association (DECA), based in Fort Myers, Florida.

“Now, 33 years later, I recognize that the most important thing about camp to her and to us was the emotional support that the camp family provided us,” he said. “We established lifelong friendships, and we are always there for each other, especially during the tough times.”

Ackley’s daughter Emily, who was diagnosed with type 1 diabetes as a baby, first attended Alabama’s Camp Seale Harris at age 7. Ackley volunteered at the camp for several years before joining the camp’s Board of Directors and later working as the camp’s assistant director and executive director.

In 1996, he helped establish DECA, whose members now include diabetes camps around the United States as well as in 17 countries, including Canada, Bermuda, the Dominican Republic, Puerto Rico, Ecuador, Brazil, South Africa, and several locations in Australia.

These days, there are countless summer programs for children of different ages, based on interest, focus, day or overnight options, and more. Deciding which camp is a fit for your child with diabetes should be a decision made together, one that your child will be excited and open to, as well as one that will properly support your child and whatever they need to manage their diabetes.  That camp may be a program specifically for kids with diabetes, or it may not. Either way, here’s how to successfully plan for your child to have a wonderful time at camp this summer.

It may be your child’s first summer camp experience, or simply the first time going to camp after a diabetes diagnosis. Ensure it’s a great time by learning about what programs exist, what your child is interested in.

“You know your child best and how they will function and cope at a summer camp, so research the camps available and make a mutual decision about the best fit for them, whether it’s a diabetes-focused camp, sports camp, arts camp, etc.,” said George “Joe” Trotter, Jr. , a certified diabetes care and education specialist and registered nurse at Emory Healthcare in Atlanta, Georgia. He’s also a longtime member of the clinical team and nursing staff of Kiki Kids Camp, a day camp for kids with diabetes in Rome, George.

“Don’t let your child’s new or recent diabetes diagnosis be the reason to not let them go,” he said.

In fact, your child’s experience at summer camp can be what Grace Bennett, social media manager at JDRF, and former camper and counselor at Camp Little Shot in Macon, Georgia, calls a “soft launch.”

“Your kid is going to have to learn the non-diabetic world while living with diabetes, and sleepaway camp is a soft launch to that, especially if recently diagnosed,” she said. “Camp gives them the confidence [to think] that, ‘My parent or guardian is not here, but I managed to do something completely normal.’ The sooner you can get your kid after diagnosis back to normalcy, the less of a burden diabetes feels like.”

How to Find Diabetes Camps

To help parents feel more comfortable about sending their children to camp, experts recommend reaching out to camp leadership early on to ask how diabetes care will be handled, Ackley advised.

To find a diabetes-themed camp or program near you, look at the following databases (though some have not yet been updated for the summer of 2022; be sure to contact the camp directly for the latest details in light of COVID):

For more details, reach out to speak directly to the camp director and medical staff to learn about what will be done to keep your child safe and well, said Ackley. If possible, attend a family day event, family camp, or camp open house.

“Visit and/or call the camp to learn about what will be done to keep their child safe and well and to begin a friendship with the camp staff,” he continued.

That initial contact can be the first step to developing a connection with camp staff that can help build your family’s summer camp community.

In the best scenario, “when children, and parents and often siblings become associated with a diabetes camp, the camp community becomes a second family,” Ackley added. “This diabetes camp family [can] be there beside the child for many years to come and [can] be a strong support system for them into adulthood.”

You and your child should agree on whether to go to a non-diabetes or a diabetes camp, said Trotter.

“Depending on how well your child has responded to their new diabetes diagnosis will play a big part in which camp might be a good fit for them each year,” he said.

If your child has struggled with understanding insulin injections, pump use, checking glucose, making healthy food choices, or if they just feel alone, depressed, and/or sad, a diabetes camp could be a good fit, both for education and self-empowerment.

Bennett, who worked as a counselor for nine years, said that parents may have more fears about camp than their kids might. Besides, she said, kids are resilient.

“Kids are much tougher and independent than parents give them credit for,” she said. “If a kid cries their first night, generally they are so nimble that they are happy by the second morning and they don’t want to leave” when camp ends.

The ongoing activity and close relationships that can develop during a typical camp day can often overshadow a fleeting moment of homesickness or a camper disagreement.

“It’s probably harder for parents than it is for the kids,” she said.

Some parents may have particular concerns; differences in diet at home and at camp or frequency of blood glucose monitoring are examples. Discuss these topics with the camp’s staff ahead of time.

“They really are better taken care of at diabetes camp than they are at home,” Ackley said. “There are multiple people taking care of them, a comprehensive medical team, and they will receive very good care. They will be safe.”

Ultimately, what is gained at summer camp can be significant.

“They will also establish friendships and get emotional support, and I think that’s important, if not more so, than what they learn about diabetes care,” Ackley concluded.

Being a part of a group of campers with diabetes was the first time Bennett said she felt like she fit in with a peer group.

“Where I grew up, I did not know anyone else with type 1 and that was the case all through high school,” she said. Diabetes “camp was the best because it was the one week of the year I felt completely normal. I didn’t feel like a pariah because I had to stop playing or swimming to have a snack – I was one of eight kids doing the same thing.”