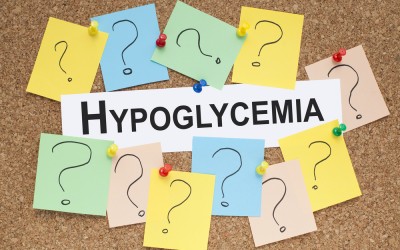 Most people with diabetes know when they are low, but others have difficulty detecting it or are completely unaware. This is known as “hypoglycemia unawareness” or “impaired hypoglycemia awareness.” In this article, we’ll break down what hypoglycemia unawareness is, what factors increase the likelihood of experiencing it, and what steps you can take to reduce your risk.

What is impaired awareness of hypoglycemia?

Hypoglycemia can be caused by excess insulin, missing a meal without reducing medication, exercise, alcohol, and other factors. Sulfonylureas, a pill for type 2 diabetes, are also known to increase the risk of hypoglycemia.

“Hypoglycemia unawareness” or “impaired awareness of hypoglycemia” occurs when someone doesn’t experience or perceive the symptoms of hypoglycemia, which typically occur when blood sugars fall below 54 mg/dl (3.0 mmol/L). See a list of common symptoms below, which stem from the body’s natural response to very low blood sugar.

Studies show that those with hypoglycemia unawareness are at much higher risk for experiencing “severe hypoglycemia” because they are less likely to recognize early “alert” signs, such as shakiness, hunger, or sweating (these symptoms are also known as “autonomic” symptoms). Other symptoms include neuroglycopenic symptoms, which result from impaired brain function due to low blood sugar, as well as nonspecific symptoms (see table below).

Do I Have Hypoglycemia Unawareness?

About one in five people with type 1 diabetes and one in ten with insulin-treated type 2 diabetes report experiencing hypoglycemia unawareness.

Several factors increase this risk, including:

Below is a questionnaire to determine if you have hypoglycemia unawareness: 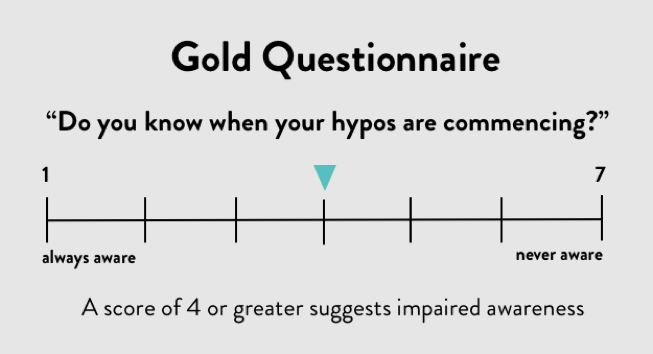 Check what glucose level at which you are recognizing hypoglycemia.

If you recognize hypoglycemia only when glucose is far below 54 mg/dl (3.0 mmol/L), consider taking steps to reduce the number of times your blood glucose falls below this level – we share some tips below. This may also help to reset symptom onset and/or recognition for a higher glucose level.

What can I do to protect myself?

One of the best ways to avoid hypoglycemia unawareness is to reduce the time spent with low glucose levels. The following may be helpful:

By measuring blood sugar several times daily, many people with impaired awareness can identify potential hypoglycemia and reduce the risk of developing low levels without warning.

A number of clinical trials have shown that seeing your glucose levels in real-time (via measuring tissue fluid) may help prevent hypoglycemia. While fingersticks give a snapshot at a single point in time, CGM provides a glucose value every five minutes as well as trend information and optional alarms, alerting users of lows when they start or even before they happen. Continuous glucose sensors that are currently available include: Abbott’s FreeStyle Libre; Dexcom’s G5; Medtronic’s Guardian Sensor 3, Enlite, and Guardian Connect (outside the US); and Senseonics’s Eversense (outside the US).

3. Work with your healthcare provider to fine-tune your insulin regimen

FDA-cleared apps like iSage Rx and My Dose Coach may also be helpful for people with type 2 diabetes who would like more frequent guidance for dosing basal insulin.

If possible, switch to an insulin analog or next-gen insulin – especially one of the newest long-acting (basal) insulin analogs like Toujeo or Tresiba.

Access can be challenging – work with your healthcare provider, and see our various strategies to gain coverage in the US through our access series.

For people with type 2 diabetes on insulin therapy, taking a GLP-1 agonist may reduce the need for boluses (mealtime insulins), which may reduce hypoglycemia. GLP-1 drugs include Victoza, Ozempic, Trulicity, and Bydureon.

Structured training is in-person training with a doctor, nurse, or diabetes educator who will help on how to improve insulin use and on how to anticipate an increased risk of low blood sugar. They also help manage mental barriers associated with going low. If you have never worked with a certified diabetes educator, it is especially encouraged! You can use this online tool from the American Association of Diabetes Educators (AADE) to find a program near you. Medicare and most private insurance plans cover up to 10 hours of initial training with a diabetes educator, although people covered by Medicare have to pay 20% of the session’s cost. This free, online training also provides general information on how to recognize and treat hypoglycemia.

Similar to CGM, automated insulin delivery (AID) is technology designed to remove constant monitoring and decision-making to help users manage blood sugars. AID systems take CGM values every few minutes and run them through algorithms that decide how much insulin to deliver via a pump. As blood sugars fall, insulin is reduced or suspended, which helps prevent hypoglycemia.

Medtronic’s “hybrid closed-loop” MiniMed 670G is FDA-approved and available for users in the US. The previous version in the US, the MiniMed 630G, has low glucose suspension – an algorithm that suspends basal insulin delivery when blood sugars cross a low threshold. However, it does not increase insulin delivery for high blood sugars or predictively suspend basal insulin delivery before a low is reached (as the MiniMed 640G, available in Europe, does). Many more AID systems are in development and expected to launch in the next three years – see a list here.

Many people with diabetes are also using do-it-yourself AID systems such as Loop and OpenAPS.

A great way to combat hypoglycemia unawareness is to have an emergency toolkit with all the items you need in case you do go low. It’s important to make sure that friends and family know what to do in case you have a hypoglycemic event and that they know where your emergency toolkit is. Your toolkit should include glucose tablets or sugary snacks, glucagon (either emergency nasal glucagon like Baqsimi or ready-to-use autoinjector pens like the Gvoke HypoPen), your glucose monitor (this could be your BGM or CGM), and finally, your emergency contact information.

Glucagon is an extremely important part of anyone’s toolkit. Glucagon is a hormone that increases blood sugar levels by telling the cells in the body to release any stored sugar into the bloodstream. In an emergency, it can be given to someone to quickly raise their blood glucose.

While impaired awareness of hypoglycemia can be a serious issue for some people with diabetes, risk can be significantly reduced with the right tools, resources, and awareness. Let us know if you have other ways to tackle hypoglycemia unawareness.

Special thanks to Professor Simon Heller and Professor Brian Frier.

More than a hundred studies have been completed in AID – see a partial list here, and a few highlights below that illustrate some of the hypoglycemia reduction outcomes: