Fiasp, a Faster Mealtime Insulin, Now Available in US Pharmacies 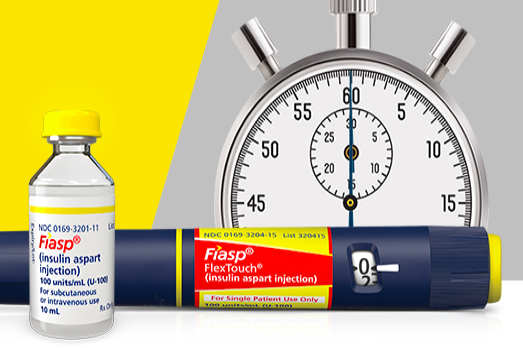 Adults with type 1 and type 2 can now choose Fiasp, which can be taken up to 20 minutes after starting a meal and still be effective

Fiasp (“fast-acting insulin aspart”) is now available in US pharmacies. A quicker version of the mealtime insulin NovoLog, Fiasp was approved by the FDA for adults with type 1 and type 2 diabetes last fall.

Notably, Fiasp is the first mealtime insulin without a pre-meal dosing recommendation – Fiasp can be taken as much as 20 minutes after starting a meal, while other injected mealtime insulins are best taken 20 minutes before eating. This flexibility is due to the faster onset and offset of this insulin. (It is still strongly recommended that users take Fiasp before the start of the meal when possible, but the option to take it up to 20 minutes later does add extra flexibility when necessary.)

Depending on the amount taken, Fiasp begins lowering glucose in 15-20 minutes, has a peak glucose-lowering effect in about 1.5-2 hours, and returns to baseline glucose-lowering within 5-7 hours after dosing.

Though Fiasp will be in the same price range as NovoLog, actual out-of-pocket costs will differ by insurance company and depend on the availability of patient discounts. Currently, Novo Nordisk is still negotiating with insurance companies to get Fiasp on their lists of covered drugs. In the meantime, the Fiasp savings card can lower co-pays to $25 per month for eligible people with private insurance. For those without insurance or those who cannot afford Fiasp with insurance, Novo Nordisk’s patient assistance program (PAP) works to provide prescriptions free of charge. (See more on PAPs here.)

One thing to watch out for is to make sure your pharmacy fills your prescription correctly. We've heard some reports of people accidentally getting NovoLog instead of Fiasp. The confusion stems from Fiasp having the same main ingredient as Novolog, insulin aspart; the difference is that Fiasp also has vitamin B3, known as niacinamide, which makes it more fast-acting.

Inhaled insulin Afrezza, available in the US since 2015, is the only other ultra-fast-acting mealtime insulin. Though they have not been compared in a head-to-head study, Afrezza’s label suggests faster action than Fiasp. Afrezza begins working within 12 minutes, has a peak glucose-lowering effect within 35-45 minutes, and returns to baseline glucose-lowering within 1.5-3 hours after dosing depending on the amount taken.