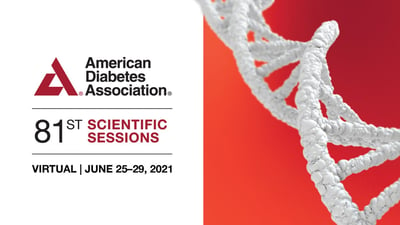 Days two and three of ADA’s Scientific Sessions – the biggest diabetes conference of the year! – brought big news and interesting research at this year’s virtual gathering. Click to read our coverage from day one here.

Promising results from three pivotal studies showed that Omnipod 5, Insulet’s new automated insulin delivery (AID) system, can help people of all ages manage type 1 diabetes. Among children, teens, and adults with type 1 diabetes, the system is found to be safe and easy to use at three months – and early results from the 12-month extension phases of the trials show that the glucose effects can be sustained for six months.

The table summarizes three-month results from all three trials, and we explain the data in more detail below.

Dr. Korey Hood presented quality of life outcomes from the Omnipod 5 trial in children and teenagers (ages 6 to 18). The results, reported by participants and one parent before starting Omnipod 5 and after three months of use, showcased the value of AID systems for reducing the burden of diabetes and improving quality of life.

Following the initial three-month pivotal results from Omnipod 5, 92% of adults and adolescents, and 99% of children, chose to continue using Omnipod 5 in a one-year extension phase of the trial. After six months of Omnipod 5 use:

Omnipod 5 has been submitted to the FDA for people ages 14 and older in the US, and will hopefully become available later this year.

Exciting new results were shared from the US pivotal trial for Medtronic’s Extended-Wear Infusion Set. The study enrolled 259 people with type 1 diabetes using the MiniMed 670G system and found:

Medtronic’s Extended-Wear Infusion Set is approved in Europe and launched in Finland. In the US, the device has been submitted to the FDA.

Dr. Elena Toschi presented an analysis of real-world data from older adults with type 1 diabetes who started using the Control-IQ automated insulin delivery system. The sample included data from 39 adults with an average age of 70 years and a baseline glucose management indicator (GMI) of 6.9%. Researchers compared CGM data from two weeks prior to starting Control-IQ with data from three months after initiating the automated insulin delivery system. Participants’ Time in Range (TIR) increased from 64% to 87%. This is about 5.5 more hours spent in range each day!

All of these adults had prior experience with continuous glucose monitoring and insulin pumps.