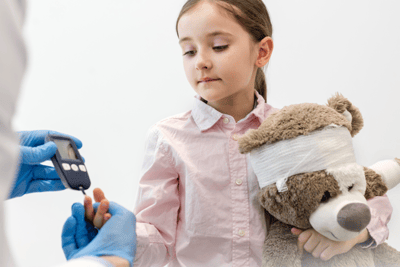 When Kim Baillieul first learned she had type 1 diabetes nearly 25 years ago, the people around her hadn’t recognized her classic symptom.

“A few days before I was diagnosed, my Spanish teacher didn’t believe I needed to use the restroom twice in an hour,” she said. Frequent urination is a typical sign of undiagnosed diabetes.

Even though the early warning signs for diabetes might seem as inconsequential as frequent thirst or excessive urination, without proper medical treatment, undiagnosed diabetes, depending on the type, can cause multiple health problems both sooner and later.

More specifically, type 1 diabetes is when the pancreas simply stops producing insulin, due to an autoimmune response where the body’s immune system wrongly attacks the pancreas’s insulin-producing beta cells.

In a short time, a person who has undiagnosed type 1 diabetes will have very high blood glucose numbers. This can cause extreme thirst and/or hunger, frequent urination, feeling very tired, slow-healing cuts or wounds, having blurry vision, or unintended weight loss.

Without insulin treatment, a person can go into diabetic ketoacidosis (DKA). This can happen when the body doesn’t have enough insulin and breaks down fat too quickly, which turns into a product called ketones. When ketones are found in the blood or urine, the blood can turn acidic and the condition can be life-threatening. Signs of DKA are sweet-smelling breath, heavy breathing, vomiting, and can quickly lead to stupor, unconsciousness or death, according to the American Diabetes Association (ADA).

Type 2 diabetes, on the other hand, occurs when the body’s cells are not able to respond to the insulin that the beta cells are producing. It can be linked to family history and genetics as well as excessive weight and a sedentary lifestyle.

Signs of undiagnosed type 2 diabetes are similar to type 1: feeling very thirsty or hungry, urinating a lot, experiencing fatigue, having slow-healing wounds or cuts, and/or blurry vision. Type 2 diabetes can also cause tingling, pain or numbness in the hands or feet, per the ADA.

Since the symptoms can have a much slower onset, be hard to notice, or may be linked to other health problems, people can survive with undiagnosed type 2 diabetes for a long time, but as a result of the chronic hyperglycemia (high blood sugar), they risk developing cardiac, nerve, vision and/or kidney problems, as well as premature death.

Once she was diagnosed, Baillieul made it a priority to teach others about what diabetes is and how to recognize it. Today, she is a Columbus, Ohio-based author of the children’s diabetes education book Mommy Beeps and advises others to “go out of your way to help others with any disability or medical condition.”

She has helped others spot the condition before diagnosis, too. Five years ago, Baillieul listened to her close friend describe how her nephew had been quickly losing weight and felt tired – two other characteristics of undiagnosed diabetes. When her friend said the boy was thirsty all the time, “I suggested checking his sugar. Boy, am I glad I did: it was 440 mg/dl.”

A person without diabetes typically has a blood sugar (glucose) reading of 70-99 mg/dl while fasting, and no higher than 140 mg/dl an hour or so after eating. His reading was “scary, but he was admitted to the hospital before things got worse.”

Knowing the signs and symptoms that indicate diabetes can be life-saving.

While parents with diabetes may be more aware of what the signs of undiagnosed diabetes are, and a family history of diabetes can increase the risk that a relative will develop it, there are still many people diagnosed without any family connection.

Regardless of whether diabetes runs in your family, here are common and uncommon symptoms to keep an eye out for:

Signs and symptoms to look out for:

Common symptoms of diabetes include:

Symptoms may be the same whether you are diagnosed with type 1 or type 2 diabetes, said Vandana Sheth, RDN, registered dietician and spokesperson for the Association of Diabetes Care & Education Specialists.

However, type 1 symptoms can develop very quickly. “Type 2 symptoms can come on slower and may not be as noticeable,” she said. “Symptoms can be missed or dismissed as a normal part of aging, or being overworked, etc.”

People can also live for a long time with undiagnosed type 2 diabetes. According to the ADA, citing research from the Centers for Disease Control and Prevention’s 2020 National Diabetes Statistics Report, there are 7.3 million adults in the US who have diabetes and do not know it. These people are at a much higher risk of ultimately developing serious complications, including nerve damage, stroke, kidney or heart disease. Annually, about 1.5 million American adults learn they have diabetes, either type 1 or type 2.

If you see any of the above signs or symptoms in a family member, friend, colleague or peer, encourage them to contact their primary healthcare provider to get a blood test to determine their glucose levels.

If that person doesn’t have a healthcare team, have the person seek help at an urgent care clinic for a blood glucose test to see if the result is higher than normal.

Immediate emergency care may be necessary, even if the person insists they feel mostly fine. They may have grown accustomed to the symptoms of having elevated glucose levels and don’t realize just how poorly they really feel.

When parents already have diabetes, they may recognize potential symptoms in their children. Theresa Hastings, of Milledgeville, Georgia, who has lived with type 1 diabetes for 23 years, said she is attuned to looking for the signs in her young son.

“When he was about 2, I noticed my son was peeing more than usual, and really thirsty,” she said. “My immediate thought was that my worst fear had come true: I gave my child diabetes.”

Hastings checked his blood sugar and was relieved to see a normal reading, but she still called her pediatrician for guidance. The doctor, she said, “wasn’t concerned at all, and at the time, it didn’t feel dismissive and relieved my fear.”

Soon after, Hastings enrolled her son in TrialNet, a research initiative that offers genetic testing for children of parents with type 1 diabetes to indicate whether those children have a genetic susceptibility to developing type 1. She also enrolled her son in an antibody-screening program called ASK.

“I wanted to know if I had a reason to be concerned or if my worry was illogical,” she said. “He has tested negative for antibodies every year. When TrialNet’s annual testing ended, he continued to be tested through ASK; nine years later, he is still negative. Ever since he started TrialNet, I haven’t felt the need to check his blood sugar.”

Though parents with diabetes may worry about their children being diagnosed, they can also offer valuable insight about how to live with diabetes if a diagnosis happens.

Kimberly Bargas, 45, who lives just outside Kansas City, Kansas, was diagnosed with type 1 diabetes at age 4. When her son was born in 1998, he was hypoglycemic, and his glucose levels remained low until he was 6.

“Despite that being his diagnosis, and his lower A1C and [normal] C-peptide levels, I worried nonstop about him having type 1,” she said. A1C tests measure an average blood glucose level over the previous 2-3 months, while C-peptide levels can help indicate whether a person has type 1 or type 2 diabetes.

“I kept worrying since I was under age 5 [when diagnosed], that he was absolutely going to be or had to be diagnosed at that age.” Once he passed that age, she said, “I completely put it out of my mind.”

In 2007, when her son was 11, Bargas noticed one day he was cranky, and she had to stop twice to give him a bathroom break during a 75-minute car drive. Bargas checked his blood glucose levels several times that day, noticed it was higher than normal but knew her son had some candy and part of a sugar soda earlier in the day.

By the evening, his blood sugar reading was over 650 mg/dl, though he had no ketones and did not experience DKA. Bargas immediately brought him to the local hospital emergency room, where he was diagnosed with type 1.

Bargas says her own experiences living with diabetes have helped her teach her son to manage the condition, and likely helped her prevent a DKA experience for him at diagnosis by recognizing the signs. An early diagnosis “will probably save or stop some of the craziness, negative memories, or events associated with a diagnosis story,” she says.

Being able to recognize the symptoms is important, but always check with a healthcare provider to confirm a diabetes diagnosis, rather than trying to self-diagnose.

For more information about being newly diagnosed with diabetes, check out diaTribe’s resources on the subject: