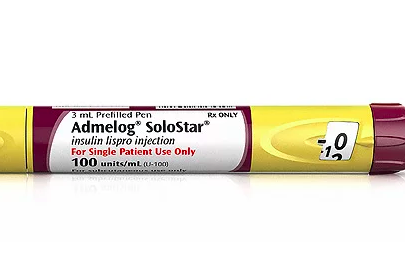 By Amelia Dmowska and Payal Marathe

Admelog will launch this year as the first approved biosimilar rapid-acting insulin. Will it be less expensive than Humalog?

The FDA has approved Sanofi’s Admelog, a rapid-acting insulin for people with diabetes ages three and older. Admelog is termed a “follow-on” to the common mealtime insulin, Humalog (insulin lispro). Because Admelog uses the same type of insulin as Lilly’s Humalog, it can be thought of as a sort of “me too” version of Humalog. It works the same and is just as safe and effective, but it’s not identical because of the complexity of the manufacturing process. (In Europe, this same insulin is called a “biosimilar” insulin instead of a “follow-on”.) In terms of what follow-ons and biosimilars mean for diabetes management and care, they can be thought of as the same thing as the original insulin.

Admelog will be offered in vials and SoloStar pens, and is expected to reach US pharmacies sometime this year.

While the FDA has approved biosimilar long-acting (basal) insulins – Basaglar and, tentatively, LUSDUNA Nexvue, both modeled on the popular basal insulin Lantus (insulin glargine) – Admelog is the first approved rapid-acting (mealtime) follow-on insulin. Admelog was approved in Europe in July under the name “Insulin lispro Sanofi.”

Although Sanofi has not commented on pricing, Admelog will likely cost less than Humalog. Biosimilar and follow-on medicines tend to be about 15-30% less expensive than brand name versions – Basaglar, for instance, is about 15% cheaper than brand name Lantus.

The FDA had tentatively approved Admelog in September 2017, based on studies showing that it was just as effective and safe as Humalog. The FDA waited to announce formal approval, however, until patent disputes between Sanofi and Lilly (the manufacturer of Humalog) were resolved.

The FDA pointed to the approval of Admelog as an example of their recent commitment to increase the availability of lower-cost alternative prescription drugs by encouraging competition. FDA Commissioner Scott Gottlieb noted, “This [commitment] is particularly important for drugs like insulin that are taken by millions of Americans every day for a patient’s lifetime to manage a chronic disease.” To read more about the potential of this “new era” of insulins, click here.