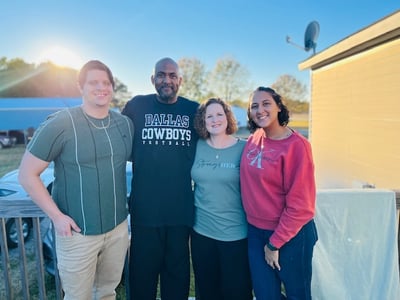 Anthony Wilson, a patient advocate with the Know Diabetes by Heart campaign, discusses his diagnosis journey, the stigma he has experienced, and his advice to others on finding a support network and being open about their conditions.

In 2012, Anthony Wilson and his wife, Sheila, started a journey together to lose weight. For several years, Wilson weighed over 300 pounds and he had a condition that caused his heart to race (called supraventricular tachycardia), along with high blood pressure and high cholesterol. Though he seemed to be managing these conditions with medications, his family pushed him to improve his exercise habits and food choices.

“Early on, I was losing a lot more weight than she was,” he said. “And I thought I was looking good! But I did feel a little more fatigued, and I was using the bathroom more often. But I thought it was just my metabolism. It never even occurred to me that it could be diabetes.”

However, one morning in October of that year, Sheila told him he didn’t look so good – his eyes were sunken in and his skin was gray. He hesitated when she suggested going to the hospital, but he gave in when she insisted.

“I remember walking down the steps of the house,” said Wilson. “But that’s the last thing I remember until I woke up in the ICU.”

When he regained consciousness, the doctor reported that his blood sugar was 1,098 mg/dL and his A1C was 17.2%, with many of his organs failing. If Sheila hadn’t acted quickly that morning, the doctor wasn't certain Wilson would have made it.

During the week he was in the hospital, his doctor told him he had type 2 diabetes and would need to start on insulin which he would need to take for the rest of his life. The Wilson family immediately started to educate themselves on everything related to diabetes, drastically changing their diet and exercising more. Within a few weeks, just before Thanksgiving, Wilson’s A1C and fasting blood glucose were brought back down so significantly that his healthcare team took him off insulin.

However, even with his success in managing his diabetes, driven in part by the need to make sure his heart condition doesn’t worsen, Wilson said that at times he still felt others blamed him for his diabetes.

“The first thing people would say to me was, ‘haha, you must’ve eaten too much candy growing up,’” said Wilson. Those types of misguided comments that stigmatize people with diabetes can be infuriating. “I tried to stay positive, but you know, a few times I think I snapped at some people. ‘It’s not about eating candy. You don’t understand."

What is stigma and how does it relate to chronic illnesses?

Stigma can be a major challenge for people with chronic illnesses such as diabetes or heart disease. Stigma exists everywhere; within the family, school, workplace, and healthcare setting. And it can often prevent people from seeking care for both their physical and mental health.

Stigma can take the form of negative attitudes and off-handed jokes like the ones that people said to Wilson, or it can be as serious as outright discrimination. Evidence shows that stigma can be a significant source of stress and that it increases a person’s risk for severe complications.

The stigma related to diabetes and heart disease refers to the exclusion, rejection, prejudice, or blame that people unfairly experience as a result of their chronic illness. “The stigma of, ‘oh, you were fat,’ or, ‘you were overweight and had you exercised more maybe you wouldn’t have diabetes,’ it can make you depressed. You feel like people are looking at you like it was all your fault,” said Wilson.

Often, this occurs because people mistakenly believe that lifestyle choices alone cause these conditions. In actuality, a host of factors, including genetics and your environment, also contribute to your risk.

Comments and misconceptions about diabetes and heart disease, such as, “If you had just worked out more and stopped eating sweets, you wouldn’t have diabetes,” and, “I told you to stop smoking and start exercising, that’s why you have heart disease,” do much more harm than good, according to research on social stigma for people with diabetes and chronic illnesses. When people experience stigma, it can lead to:

What about stigma from other sources?

Unfortunately, people may experience stigma or even discrimination as a result of their race and ethnicity, education, socioeconomic status, mental health, where they live, and more – not just their health condition.

Addressing all sources of stigma should be a major concern for healthcare professionals and public health officials. Numerous studies have shown a strong relationship between discrimination, stigma, and indicators of cardiovascular health. Those experiencing added stress as a result of the stigma they face – because of their race, for example – are at additional risk for worse cardiovascular health and high blood pressure.

One of the best ways to navigate the feelings of blame or shame about chronic conditions is to build a support system of family, friends, and healthcare professionals.

“My goal was to live with diabetes but be healthy. I want to be around for another 50 years with my wife, kids, and grandkids one day,” said Wilson. “How did we decide to do it [exercise and lose weight]? Well, we did it all together as a family.”

It’s not just having support at home, but also from your healthcare team. “Something I always stress to people is to make sure you have a great endocrinologist and a great cardiologist,” said Wilson.

When his A1C started to creep up again from 4.9% to the mid 6% range, Wilson voiced his concerns to his primary care provider. Her response was, “Oh, don’t worry about it, you’re a diabetic, you’ll be okay.”

“To hear that kind of conversation from a healthcare provider, someone you trust to take care of you, is discouraging,” Wilson said. He found a new primary care physician who helped him bring his A1C back down into the 4s and maintain his current weight (he has lost over 100 pounds since just before his diagnosis), and he encourages others who may be experiencing similar things – such as not being listened to by their healthcare team or feeling blamed for their condition – to be proactive in finding a new provider.

In addition to finding support, by being open and honest about your conditions, you can inspire others to do the same. Wilson said, “If more people shared their journey, it may encourage more people to reach out to them and say, ‘I have diabetes or heart disease, but I haven’t told anybody because I am ashamed. I noticed that you put yourself out there to share your message. Can you help me [get healthier and be honest]?’”

That openness can inspire others to take control of their health, driving them to talk about risk factors with their family and healthcare team, get screened for things like diabetes and heart disease, and take preventive measures to prevent the diagnosis or progression of complications.

To learn more about stigma, you can check out our resources here or read this article, “Prioritizing Your Mental Health While Managing Diabetes and Heart Disease,” from the Know Diabetes by Heart campaign.

This article is part of a series to help people with diabetes learn how to support heart health, made possible in part by the American Heart Association and American Diabetes Association’s Know Diabetes by Heart initiative.