An Inside Look at the Dexcom G7 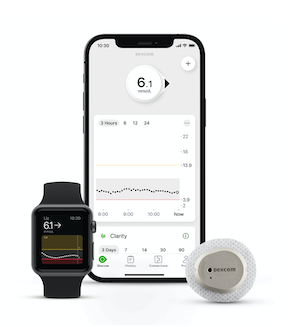 In October 2022, Dexcom announced that its next-generation continuous glucose monitor (CGM), Dexcom G7, is now available to people with diabetes in Hong Kong and several markets across Europe. Here is a look at the improvements over G6 and the expected timeline for a wider launch, both globally and in the US.

Just one of several key approvals in diabetes technology this year, the Dexcom G7 continuous glucose monitor (CGM) received a CE-mark, allowing Dexcom to sell the device to people with diabetes in Europe. While the timeline for FDA approval in the United States is still uncertain, the improvements introduced in this next-generation CGM make capturing, sharing, and analyzing your glucose data even easier.

The Dexcom G7 features several improvements over the G6 that make the device more comfortable, more accurate, and easier to replace.

When compared to the G6, G7 is approximately 60% smaller and is more circular. The new device is about the size of three quarters stacked on top of one another. Because of the smaller size and different shape, G7 can be inserted on the back of the upper arm, the abdomen, or, for children ages 2-17, on the upper buttocks. It can also be inserted using only one hand.

“The 60% size reduction between the [G6 and G7] is extremely noticeable,” said Jake Leach, chief technology officer at Dexcom. “It gets to the point where you can forget you’re wearing it because the adhesive footprint and profile of the device are so small.”

Consistent with the G6, glucose data from the G7 can be used to make treatment decisions and adjust insulin dosing. As they progress towards FDA approval, Dexcom is working on integrating the G7 into automated insulin delivery systems, similar to the G6.

G7 is also more accurate than G6. The accuracy of glucose monitors is typically described with a metric called MARD, or mean absolute relative difference. MARD is listed as a percentage, describing how far off you can expect your sensor reading to be from your actual blood glucose level. Generally, this means that the lower the percentage, the more accurate the sensor.

G7 has a MARD of 8.2% for those wearing the device on their upper arm. In comparison, G6 and Abbott Freestyle Libre 2 have MARDs of 9.0% and 9.3%, respectively. G7 is more accurate than any CGM currently available in the United States, putting it well within the accuracy requirements for FDA approval. And like the G6, the G7 doesn’t require fingersticks for calibration.

G7 makes it easier and more convenient to change sensors. It has a substantially shorter warm-up time of only 30 minutes, compared to two hours with G6. G7 has the same 10-day lifespan as G6.

Unlike G6, however, users no longer have to save their transmitters when replacing the sensor after ten days. G7 is fully disposable and combines the sensor and transmitter in one piece, so users can simply remove the entire device and insert the new one.

The new CGM also includes a somewhat controversial feature, which allows users to temporarily silence alarms and adjust the alert thresholds. While this could make it more likely that people miss urgent alerts, it also provides advantages, such as allowing people to customize alarm thresholds and reduce diabetes distress due to the fatigue people feel from frequent alarms.

Finally, the Dexcom CGM app and the CLARITY app have been combined into one app for G7 users. “The thing that’s most helpful about this is that it puts all the most important CLARITY metrics on the same screen, so you can simply scroll up and see the CLARITY card,” said Leach.

While users will still need the CLARITY app to see a detailed analysis of their glucose data, key CLARITY metrics like real-time glucose readings and Time in Range data can be seen on the same screen in the new G7 app, available on both Android and iOS smartphones. “The new app doesn’t completely replace the CLARITY app, but it adds the ability to access that information quickly. Once someone gets more familiar with their new CGM, they can download CLARITY and get into the deeper insights that that app provides,” he said.

For those who do not have a smartphone or prefer not to use the app, Dexcom will continue to offer a separate CGM reader, recently revamped for the G7. Leach added that the CLARITY app is compatible with G7 on day one, and will continue to be as soon as the device receives FDA approval.

Dexcom has not yet disclosed the price of G7. However, according to Leach, the company is “working towards the same coverage that [it has] for G6. The expectation is that there is no difference in coverage for people with insurance. [Dexcom is] also working to expand that with private payers, medicare, and medicaid [in the US],” he said.

When will Dexcom G7 be available in the US and in Europe?

Dexcom released the product on a limited scale in Europe earlier in 2022. On Oct. 4, the company announced the full launch of G7 in several countries including the United Kingdom, Ireland, Germany, Austria, and Hong Kong. Dexcom is also working quickly to introduce G7 in South Africa and New Zealand in the coming weeks.

G7 was submitted to the FDA for approval in the United States at the end of 2021 and is currently still under review. In the meantime, however, Dexcom continues to work on improving the design of G7, including its accuracy and lifespan.

“We’re very happy with the submission we’ve made [to the FDA in 2021] and with how that review is going,” said Leach. “G7 is the best-performing CGM we’ve ever developed. With the accuracy and performance even surpassing G6, we’re really excited that the G7 will pick up right where the G6 left off in terms of driving outcomes for people with diabetes.”