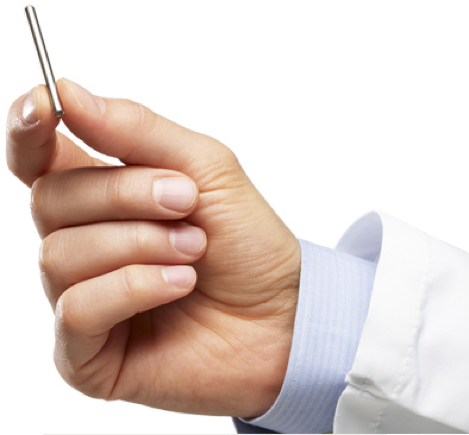 Continuously delivers GLP-1 agonist for 3-6 months; FDA decision is expected by the end of 2017

Intarcia, a growing biopharmaceutical company focused on chronic disease prevention and management, recently submitted a New Drug Application to the US Food and Drug Administration (FDA) for its implantable type 2 diabetes therapy, ITCA 650. The novel option continuously releases exenatide (a GLP-1 agonist) over the course of three to six months from a mini-pump – about the size of a matchstick – inserted just under the skin by a healthcare provider in a quick procedure (a matter of minutes). Many are looking forward to having a low hassle, needle-free GLP-1 agonist for type 2 diabetes treatment, since the options currently available involve daily or weekly injections, like Novo Nordisk’s Victoza (liraglutide), Lilly’s Trulicity (dulaglutide), Astra Zeneca’s Bydureon (exenatide once-weekly), Astra Zeneca’s Byetta (exenatide twice-daily), GSK’s Tanzeum (albiglutide), and Sanofi’s Adlyxin/Lyxumia (lixisenatide).

An FDA decision on ITCA 650 is expected by late 2017. However, given the first-of-its-kind innovation behind ITCA 650’s diabetes drug delivery mechanism, the FDA may decide to seek opinions from an Advisory Committee before making its decision.

The FDA submission follows results released earlier this year from a trial of over 4,000 people with type 2 diabetes that showed ITCA 650 met the FDA’s heart safety pre-approval requirements. Previous studies of ITCA 650 also demonstrated its favorable effects on A1c and weight loss versus Merck’s Januvia (sitagliptin); it also showed safety and efficacy versus placebo.

Intarcia CEO, Mr. Kurt Graves, outlined an upcoming clinical trial set to compare treatment with ITCA 650 to other treatments for type 2 diabetes used after metformin. The trial, with a planned start date in early 2017, will randomize participants between one of three groups: treatment with ITCA 650, treatment with an SGLT-2 inhibitor, or treatment with a sulfonylurea (all groups will be on metformin). The data generated by these head-to-head treatment comparisons could shed more light on the pros and cons of various diabetes treatment decisions that people with diabetes and their healthcare providers make – namely, is the effectiveness and convenience of an implanted therapy worth the hassle of the procedure to insert and remove the device? Intarcia is certainly hoping to position ITCA 650 as a strong second-line treatment option for type 2 diabetes, after metformin. Assuming patient-reported outcomes are collected (the ever-growing importance of which was highlighted at a public workshop at the FDA this past summer), it is likely that particularly poor results will be seen in the sulfonylurea group, since that therapy is associated with weight gain and hypoglycemia, among other undesirable side effects.

While the current FDA submission affects US regulation only, filing with international regulatory agencies is expected in the second half of 2017.