Protect Your Kidneys and Your Heart 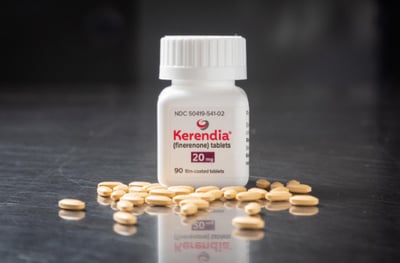 Kerendia (also known as finerenone) can reduce the risk of heart attacks, hospitalization for heart failure, and cardiovascular death for adults with chronic kidney disease in people with type 2 diabetes.

Earlier this year, the FDA approved Kerendia (finerenone), a mineralocorticoid receptor antagonist (or MRA), to slow the progression of kidney disease associated with type 2 diabetes. This approval was primarily driven by the clinical trial FIDELIO-DKD. Since then, an additional trial, FIGARO-DKD, and a large-scale analysis of both these trials (called FIDELITY) have added evidence demonstrating that Kerendia could help people with type 2 diabetes at various stages of kidney disease (including early in the disease progression) improve their heart health as well.

In the wake of this new evidence, diaTribe spoke with Dr. Bertram Pitt, principal investigator of the FIGARO-DKD study and a professor of medicine emeritus at the University of Michigan. Dr. Pitt discussed kidney disease associated with type 2 diabetes, key takeaways about Kerendia from the latest studies, the future for similar diabetes drugs, and much more.

Chronic kidney disease (CKD) is one of the most significant complications of diabetes, affecting millions of people. According to the CDC, roughly 1 in 3 people over the age of 20 years with diabetes has CKD. Dr. Pitt estimates that this figure could be even larger if you were to look only at people with type 2 diabetes. When CKD occurs in conjunction with type 2 diabetes, this can present a serious risk for heart-related complications. People who have both CKD and type 2 diabetes have a three-fold increased risk of a cardiovascular event (such as non-fatal heart attack, non-fatal stroke, or hospitalization for heart failure) compared to those who only have type 2 diabetes, Dr. Pitt said.

The presence of CKD is traditionally defined by two indicators: a decrease in estimated glomerular filtration rate (or eGFR) and an increase in urine creatinine albumin ratio (UACR). You can learn more about these tests in our article, “Recently Screened for Kidney Disease? Now What?”

The collection of studies on Kerendia each had slightly different population characteristics, which is significant because the results of the studies and the FIDELITY analysis suggest that Kerendia could decrease the risk of negative heart-health outcomes for people even in the early stages of kidney disease.

In particular, FIDELITY showed that in the over 13,000 participants in the FIGARO-DKD and FIDELIO-DKD trials, those taking Kerendia had a 14% reduced risk for the combined outcomes of death, non-fatal heart attack, non-fatal stroke, and hospitalization for heart failure.

Dr. Pitt said this new medication has a role in treating CKD and heart complications for people with diabetes.

“I would recommend [Kerendia] to patients with kidney disease and type 2 diabetes,” he said. “As part of [FIGARO-DKD], about 8% of participants were also using an SGLT-2 inhibitor, and it appears that [Kerendia] works just as well with or without [this additional medication]. Some pre-clinical data indicates that using both of these agents may have an added effect, but more data is still needed to confirm this.”

Dr. Pitt added that having Kerendia, along with multiple SGLT-2 inhibitor drugs, means that we now have multiple powerful tools to help prevent cardiovascular and kidney problems in people with type 2 diabetes.

With regards to the potential side effects of Kerendia, Dr. Pitt said he remained optimistic. Although the drug can cause increased potassium levels in the blood, also known as hyperkalemia, which can have severe effects on the heart and muscles, he said he thought the impact of hyperkalemia in this trial was exaggerated, citing what he called an insignificant difference in the number of people having to stop their trial participation due to hyperkalemia between the Kerendia and the placebo groups.

Kerendia also demonstrated a moderate effect of lowering blood pressure, which represents a significant benefit for people with type 2 diabetes. According to Dr. Pitt, “the side effects of [Kerendia] were well-tolerated among trial participants, showing that the drug can be effective across the entire spectrum of kidney disease in type 2 diabetes in reducing cardiovascular and renal outcomes.”

Looking forward, Dr. Pitt emphasized that he would like to see more medications that can lower blood pressure and reduce the risk of stroke in people with type 2 diabetes.

“Neither [Kerendia] nor SGLT-2 inhibitors have demonstrated a reduction in your risk for stroke,” he said. “Having drugs that are more effective in reducing blood pressure are especially important for reducing the risk of stroke and can address blood pressure control, which has traditionally been a hardship for people with diabetes.”

Talk with your healthcare provider if you have CKD to see if you might benefit from Kerendia.