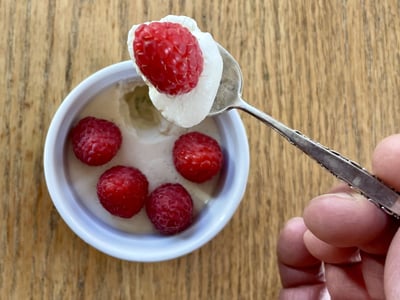 Total Carbohydrates: 11 grams per serving (Note that 6 of these are from the erythritol, which will not raise your blood sugar)

Panna cotta means “cooked cream” in Italian, and it is so incredibly easy to make and so deliciously fancy that you’ll feel like you’ve performed a magic trick. It’s gently set with gelatin, and virtually any combination of dairy or nondairy will work here – plain yogurt, milk, cream, half and half, coconut milk, whatever you’ve got. However, if you reduce the fat to nothing you will definitely lose the velvety richness that makes this so wonderful. I like adding a little sour cream to recreate the vibe of a favorite old-fashioned dessert of mine called a Russian Cream, but you can skip it if you like.

Lower the fat: Use 1 cup milk and ½ cup cream and skip the sour cream.

Lower the salt: Omit the salt

1 ½ teaspoons unflavored gelatin (half of a ¼-ounce envelope)

2 tablespoons granulated erythritol, such as Swerve (or an equivalent sweetener of your choice to replace 2 tablespoons sugar – you don’t need it for texture, just sweetness)