Medications That Protect the Heart: New Data on SGLT-2s and GLP-1s 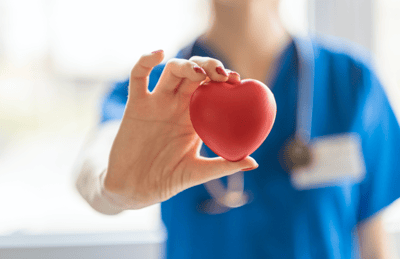 Compared to standard treatment, Steglatro did not significantly decrease the occurrence of major adverse cardiac events (MACE); this measurement takes into account the combined frequency of heart attack, stroke, and cardiovascular death. A different SGLT-2 inhibitor, Jardiance, has previously showed improvement in this category. Importantly, however, those taking Steglatro had a 30% lower risk of heart failure than did participants not taking Steglatro (see graph below). Even though it was not the “main point” of the trial, several healthcare professionals with whom we spoke found this result to be notable; it is a big deal for people at-risk for heart issues. Learn more about heart failure from our friends at the AHA.

In terms of kidney disease, the graph below shows that those on placebo treatment experienced significantly more decline in kidney function than those on Steglatro.

Another presentation at ADA, by the Mayo Clinic’s Dr. Rozalina McCoy, showed who has access to therapies like SGLT-2s in the United States. Dr. McCoy highlighted the vastly lower use of DPP-4 inhibitors, GLP-1 agonists, and SGLT-2 inhibitors among people with type 2 diabetes on Medicare, compared to people with commercial insurance. Between  2013 and 2018, those on Medicare were:

Given that these therapies are associated with lower weight and less hypoglycemia, we believe more people with diabetes should have access to them. While these medications are more expensive, we believe their advantages – reductions in heart failure and kidney problems – will save money in the long term.

Other important research emerged for people on GLP-1 drugs and at very high risk of heart failure, Harvard’s Dr. Elisabetta Patorno presented an intriguing real-world analysis of over 25,000 people with type 2 diabetes who added either an SGLT-2 inhibitor or a sulfonylurea to their GLP-1 treatment. The study found that the use of SGLT-2 inhibitor drugs significantly reduced negative heart health outcomes. Adding an SGLT-2 drug instead of a sulfonylurea was associated with a 24% decrease in a combination of heart disease incidents (myocardial infarction, stroke, and all-cause mortality) and a highly significant 35% decrease in hospitalization for heart failure.

We talked to some experts about this research.

Everyone has different approaches to their diabetes management based on a number of factors, including risk of complications (like heart disease and kidney disease), hypoglycemia, weight, ease of use, and cost. diaTribe urges all people with diabetes to talk with their healthcare professional at least every six months to discuss their diabetes management, both in terms of glucose levels and preventing and treating complications.