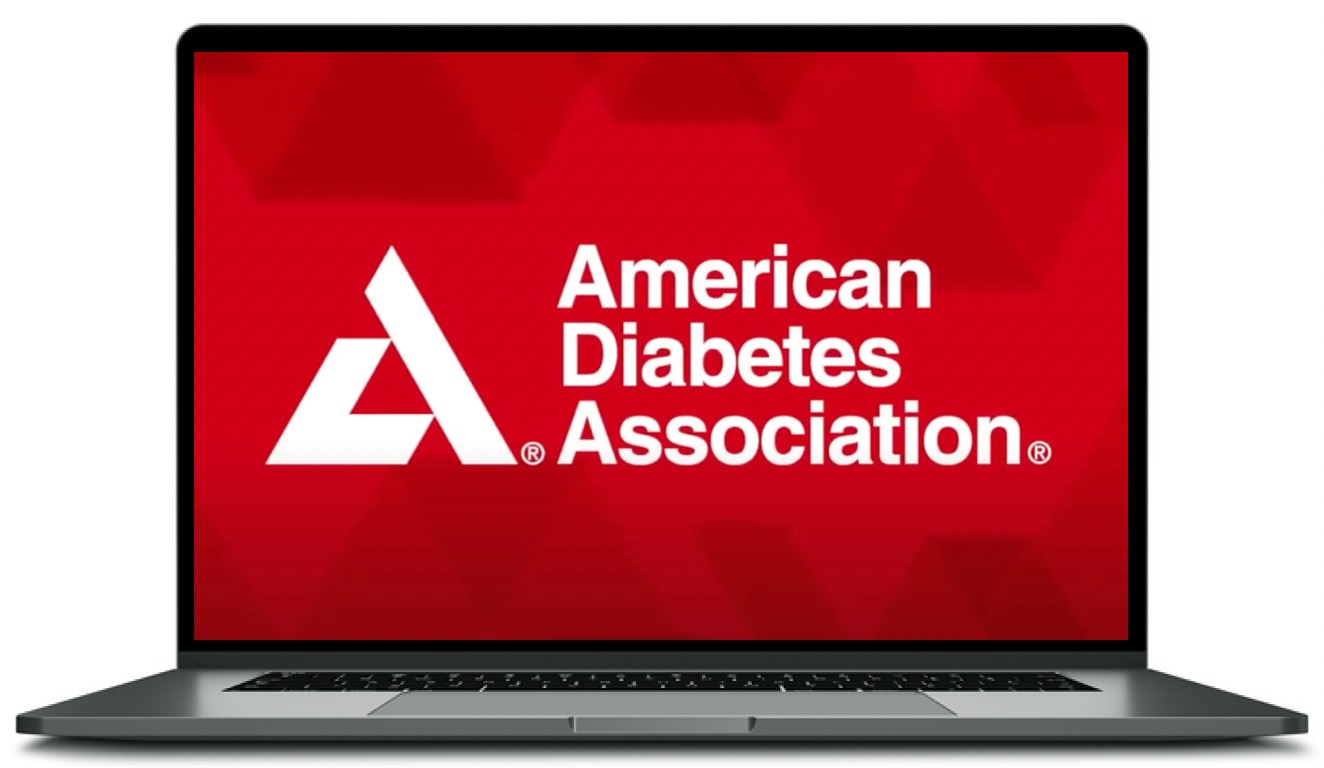 We bring you the most exciting news from day one, including updates on automated insulin delivery, ways that technology can reduce hypoglycemia, and new physical activity recommendations

ADA’s 80th Scientific Sessions is off to a great start. Here are some of our most interesting learnings from today’s virtual sessions.

Following Dr. Bode, International Diabetes Center’s Dr. Rich Bergenstal shared data from FLAIR, a trial comparing MiniMed 780G Advanced Hybrid Closed Loop (AHCL) with the 670G Hybrid Closed Loop (HCL) in adolescents and youth with type 1 diabetes (ages 14-29). This is the first ever head-to-head comparison of an AID system with a commercially available AID system. The study also had broad entry criteria: at start, 20% of participants were on multiple daily injections of insulin (MDI), 38% were not using CGM, and 25% had a baseline A1C above 8.5%. 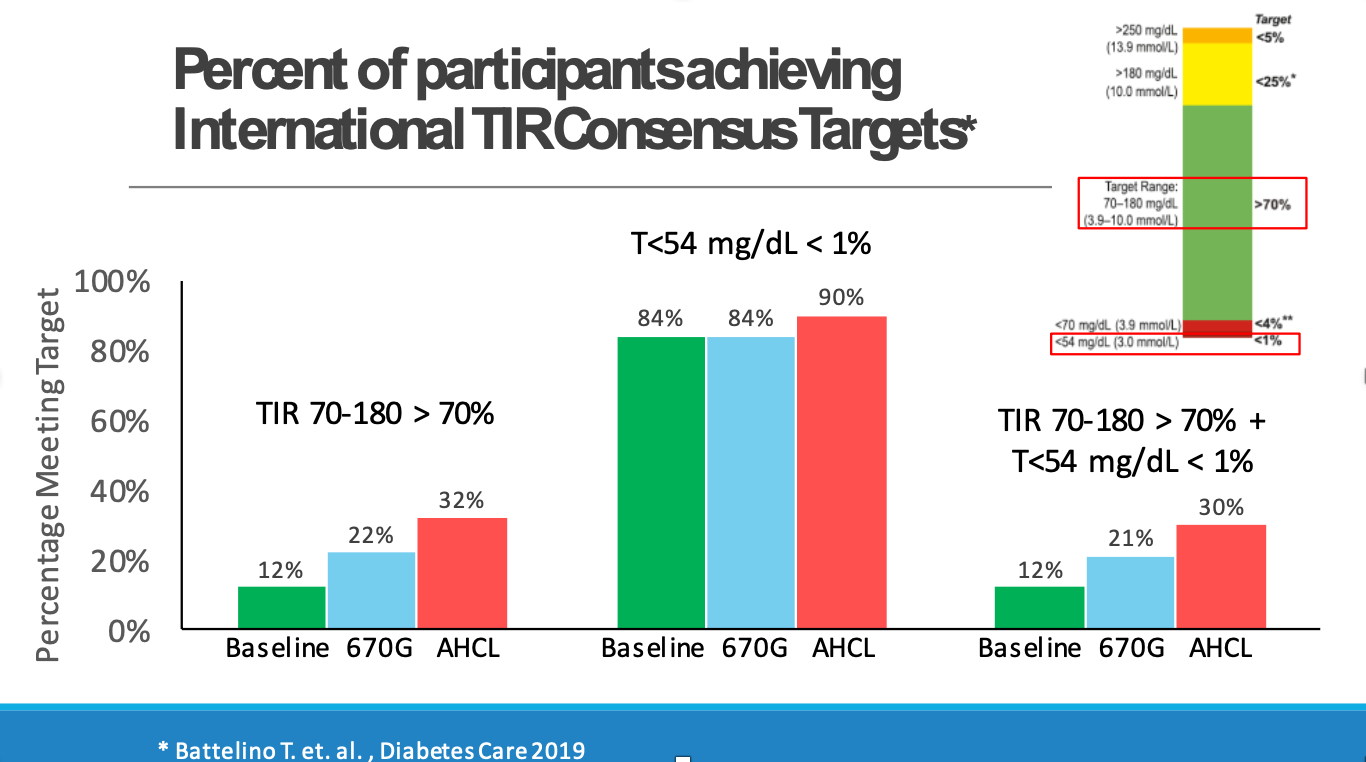 Today’s MiniMed 780G data finished with Dr. Martin de Bock’s study, which served as the clinical trial supporting 780G’s CE-Mark submission (and today’s announced approval in Europe). In a study of 59 people (ages 7-80 years, with an average age of 23) who had never used an insulin pump:

It was warming on Twitter to see Dr. de Bock with his three small children while also engaging in Q&A/Chat from their breakfast table. If you’re on social media, follow Dr. De Bock here.

The session concluded with Stanford’s Dr. Bruce Buckingham who presented data on Insulet’s Omnipod 5 Automated Glucose Control System, powered by Horizon. What fantastic data! The study assessed the safety and effectiveness of the fully on-body system over 14 days of use before starting the three-month pivotal study. Interestingly, this study was conducted during the winter holiday season when some of the lowest time in range is observed (typically a three percent drop); the system performed remarkably well in both children and adults, even during this challenging time period.

These reductions in time in range were mostly driven by a decrease in hyperglycemia. Hypoglycemia was also very low to start. Dr. Buckingham eloquently emphasized, “… this is so important for families and people at night to go to sleep and not worry about hypoglycemia … for a number of kids, they got to go on their first sleepover during this study. It was really decreasing a lot of the burden and a lot of the thinking about diabetes.”

Is Technology the Solution to Hypoglycemia? Dr. Bergenstal and Dr. Wilmot Debate

Dr. Richard Bergenstal from the International Diabetes Center (IDC) emphasized the advantages of using continuous glucose monitoring (CGM) for reducing episodes of hypoglycemia (low blood sugar) and other health complications in this debate with Dr. Wilmot. Both doctors are highly regarded, and we took this as a big opportunity to learn lots more rather than land only on one size, though it’s certainly hard to avoid saying yes to this question, from diaTribe’s perspective. Dr. Bergenstal eloquently explained that, on average, hypoglycemia is the biggest barrier to optimal blood glucose management, pointing to the fact that A1C levels increase when people fear going low (what he called the "ripple effect of hypoglycemia"). Luckily, with CGM reports, people can finally detect patterns in hypoglycemia and understand exactly how much time they are spending with blood glucose levels under 70 mg/dL in a day. 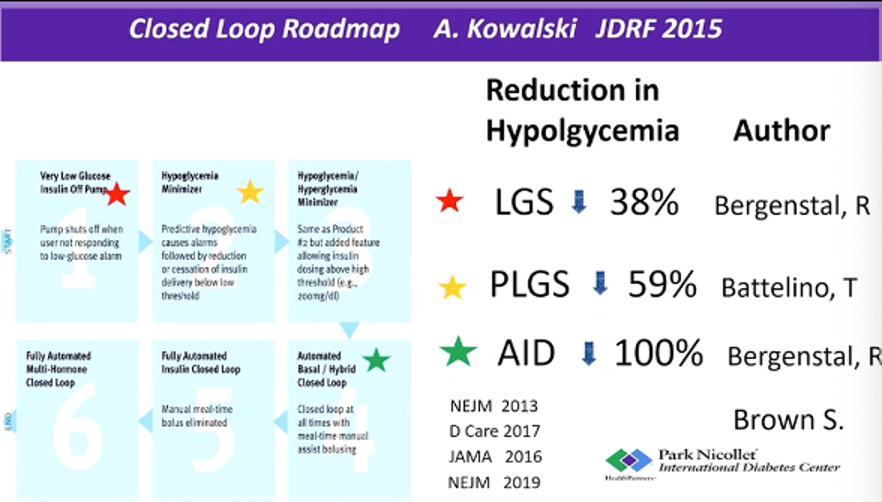 Dr. Emma Wilmot argued that while these findings are exciting, technology is only part of the solution. Technology does reduce the risk of hypoglycemia, but is not available to all (particularly those from underserved populations) and is not suited to all. She said that unless CGM is also paired with structured education, it will not provide the significant and lasting improvements in hypoglycemia awareness that the diabetes community needs. We know, of course, how important education is – and diaTribe will be coming back to discuss this in an upcoming piece about a new article just published in Diabetes Care earlier this week (Diabetes Sisters’ CEO Anna Norton was a key author in the new consensus report)!

Dr. Katrina Piercy and Dr. Ronald Sigal presented the 2018 Physical Activity Guidelines for Americans, with updates to the age-specific guidelines and evidence of even more health benefits. These are the recommendations for each age group: 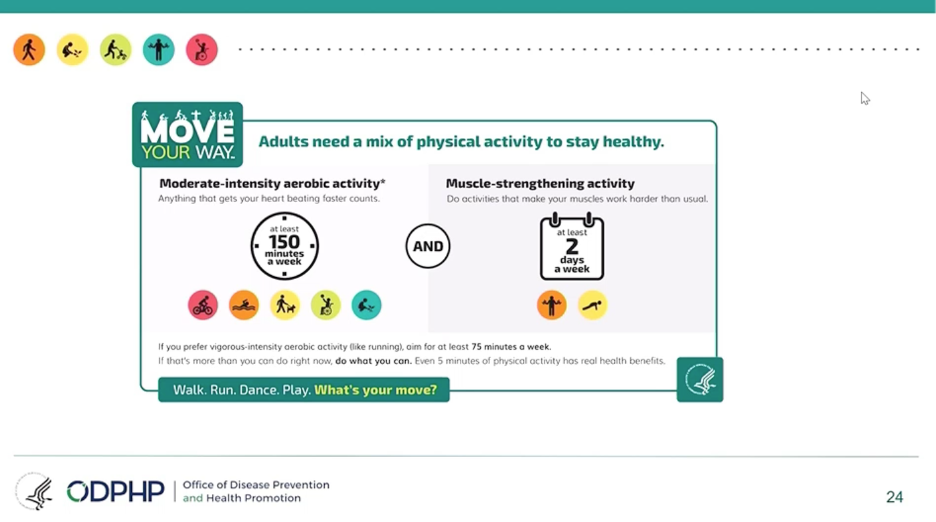 How do you determine the intensity of exercise? Dr. Piercy recommends the “talk test”: someone doing moderate-intensity aerobic activity can talk, but not sing, during the activity, while a person doing vigorous-intensity activity cannot say more than a few words without pausing for breath.

The speakers noted that while the most health benefits come with at least 150-300 minutes of moderate physical activity per week, any activity is beneficial: any time spent sitting that is swapped out for exercise (even light activity,) can lead to short-term and long-term health benefits. Read more about the guidelines here. 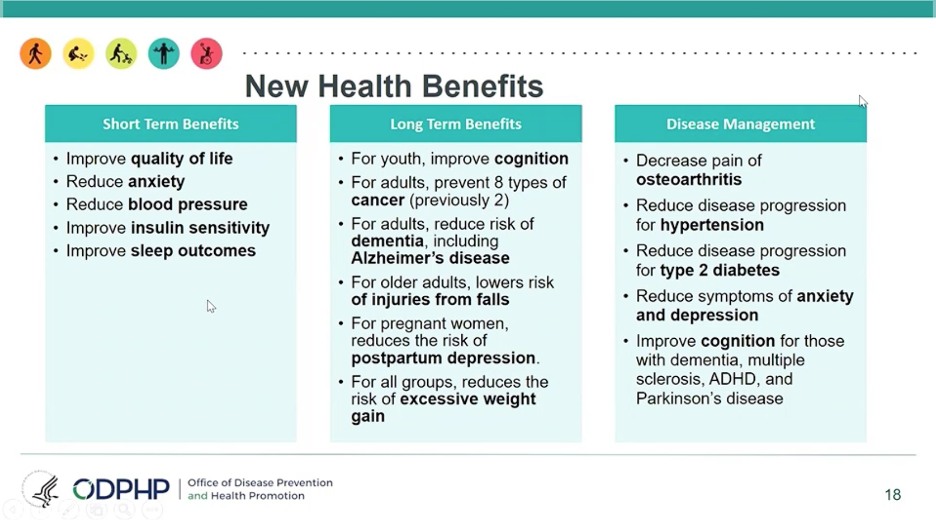 The Need for a Personalized Approach to Obesity Treatment

Experts shared the latest data on different treatments for obesity. They focused on three approaches:

Participants in Look AHEAD had more advanced diabetes than in DiRECT, leading to the big difference in remission rates. The speakers emphasized that the longer someone has been diagnosed with diabetes, the harder it is to achieve diabetes remission.

Early CGM use can help kids and predict T1D progression

The use of CGM across different populations – including people of various ages and different stages of type 1 diabetes – shows that CGM can accurately predict the progression of type 1 diabetes for people at risk. For those transitioning from “stage 2” to “stage 3”, continuous monitoring can also help prevent DKA, which many people with type 1 have at diagnosis. While there are no clinical guidelines at the moment for how to manage “stage 2” type 1 diabetes, the TESS study is currently evaluating the benefits of CGM use in this population. “Staging” of type 1 diabetes is fairly new and we will be thinking about this more as we consider how to further improve education about type 1 diabetes. 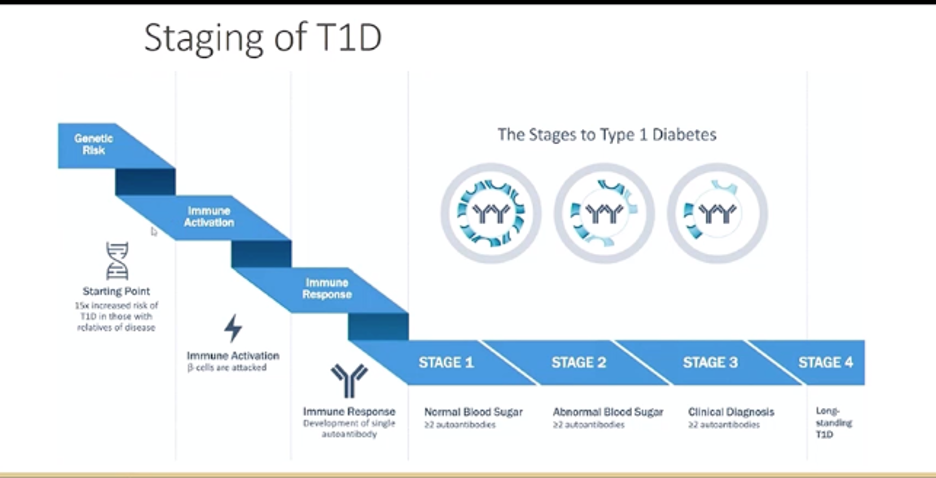 Experts all agreed that earlier use of CGM could result in better diabetes management later on. Dr. Jan Fairchild studied the start and continued use of CGM in a pediatric population with early “stage 3” type 1 diabetes. Kids who started CGM at diagnosis had slightly higher CGM wear at 24 months, compared to kids who started within the first two years of diagnosis (78% vs. 66%, respectively), though this result was not significant. All children using CGM ultimately benefitted – they demonstrated a median A1C of 7.7% at 24 months, which was less than the clinic median A1C of 8.1%. Dr. Fairchild also mentioned the educational role that early CGM use could play, especially with a focus on time in range.

The Debate on Metformin and Insulin Use During Pregnancy Continues

Traditionally, healthcare professionals have been advised to use insulin to treat pregnant women who have type 2 diabetes or gestational diabetes (GDM). Now, there is debate about whether metformin or other medications are equally effective alternatives to insulin.

Dr. Denice Feig presented data showing that in pregnant women with GDM, metformin use resulted in less maternal weight gain, less preeclampsia (pregnancy-related high blood pressure), lower birth weight, and less neonatal hypoglycemia (low blood sugar). Additionally, there is no evidence that metformin causes any abnormalities in babies, and the drug may reduce insulin resistance in the fetus. During the first trimester of pregnancy, metformin may be a reasonable alternative, if not a first-line treatment equivalent, to insulin. It is also cheaper, easier to use, and poses less of a risk for hypoglycemia (low blood sugar) than insulin.

While the data are promising, both Dr. Feig and Dr. Linda Barbour pointed out that long-term effects on the baby due to exposure to metformin during pregnancy may include a greater risk of being overweight, developing obesity, and having a higher BMI. Unfortunately, the data did not include pregnant women with type 2 diabetes; an ongoing study, MiTy, is currently studying these effects. Both Dr. Feig and Dr. Barbour emphasized that we need more data to decide the best treatment for pregnant women with diabetes – that may well be, and we also hope that better screening is in the works, so that those at risk of gestational diabetes can learn about it earlier and work with their healthcare teams to live with it successfully, which is eminently possible. Learn more about gestational diabetes in our recent article by Cheryl Alkon.