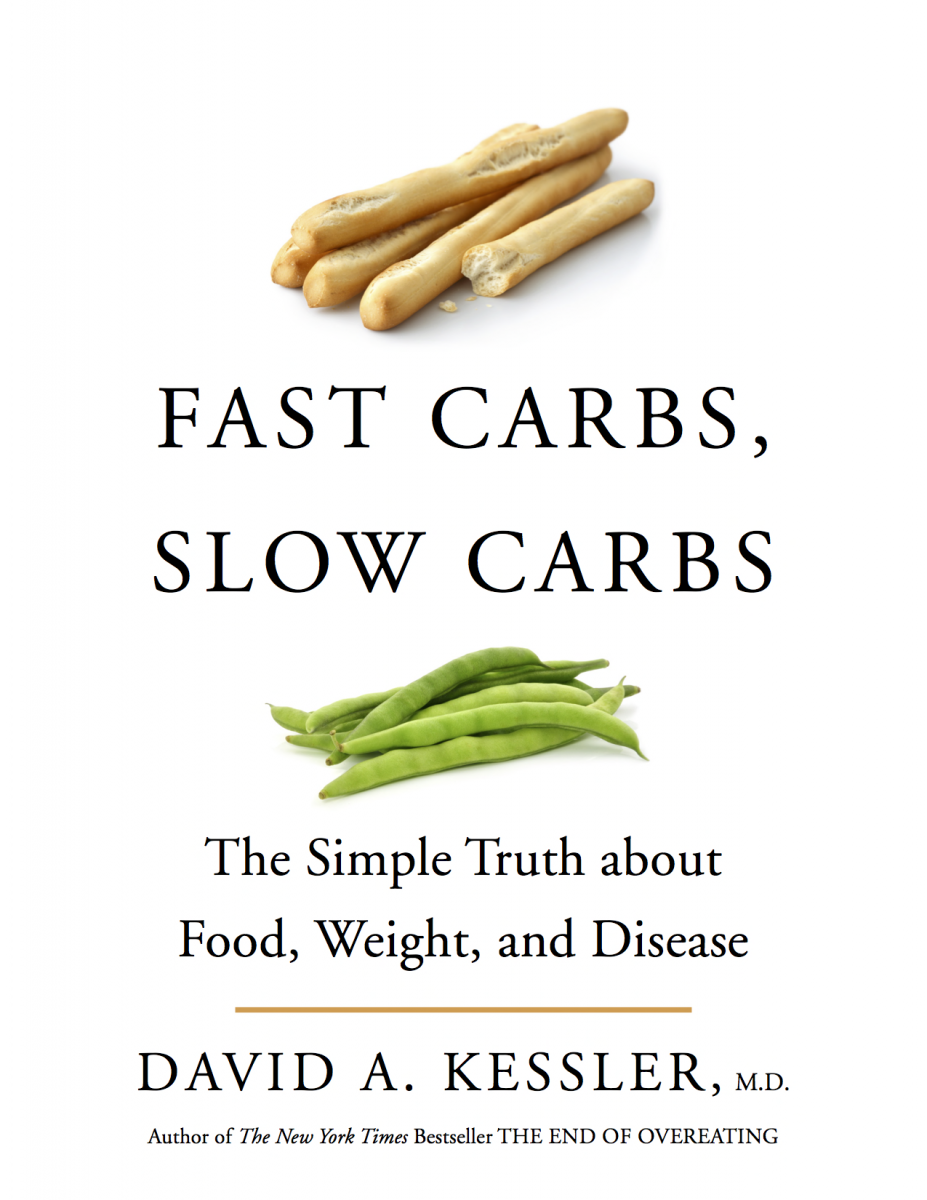 David Kessler’s “Fast Carbs, Slow Carbs: The Simple Truth about Food, Weight and Disease” comes out March 31, 2020. We recommend pre-ordering his book (I’m so grateful for our advance copy) and signing up for what is to be a fabulous virtual talk about his new book at Washington DC’s famous Politics and Prose bookstore this coming Saturday.

We are so lucky that in this challenging time, some bright spots are emerging – we all get to hear Dr. Kessler speak live this Saturday. Dr. Kessler is an incredibly impressive, devoted public servant – he stared down tobacco cold during his reign at FDA, and if anyone can stare down the worst food of the worst, it’s he. In this new volume, he’s got a big point to make on nutrition, one that eluded me until very recently – it’s not just carbs that America (and the world) should avoid – it’s fast carbs, spikey carbs: white potatoes, potato chips, white bread, white rice, breakfast cereals, corn chips, and more.

Indeed, “Fast Carbs, Slow Carbs” is Dr. Kessler’s latest clarion call on how our diet is damaging our health and how we as individuals, and as a country, must respond. Dr. Kessler is perhaps best known as the former high-profile commissioner of the FDA (1990 to 1997), and – with degrees in both medicine and law – he is well-suited as our country’s leading Cassandra on public health. Close to home, here in San Francisco, Dr. Kessler ran the UCSF medical school and the Yale University medical school.

In many ways, “Fast Carbs, Slow Carbs” is a companion volume to Dr. Kessler’s best-selling “The End of Overeating: Taking Control of the Insatiable American Appetite” (2009), which examined the role of our brains in disrupting our natural system of appetite regulation. I so vividly remember Dr. Kessler reading from this book at CPS Lectures in 2009 – he was one of our most incisive speakers ever, and guests have been clamoring for more on this front for years. Here’s the next volume to read, people.

While Dr. Kessler was one of the first in a long succession of experts to write about the brain, his new book moves to a different part of the body, our digestive tract, to further explain why, as a matter of biology, we are poorly equipped to resist cereal, pizza, and potato chips. These are fast carbs, or carbs that absorb quickly into our blood stream and are associated with weight gain, blood sugar spikes, and type 2 diabetes, among many other maladies. That’s exactly why we advise against fast carbs in the diaTribe nutrition guidelines, developed in 2017.

Wheat is the enemy, and fast carbs, according to one researcher, are the “indulgent grains.” Yes, yes they are. I still remember when I learned about “carbs” and that they were bad. It was 1990, and my first autumn in New York City, when I had just graduated from college and I began eating bagels and jam for breakfast. Horror! … you might say. But, no, not only was I still on the dreaded, old exchange system – I didn’t even yet know from carbs. I asked my new endocrinologist, “Why, oh why, are all my morning readings over 300?” Yes, seriously. “Is it because of the jam I’m eating with my bagel in the morning?” On long walks on Sundays, as a broke 22-year-old, I’d go down Broadway, visiting Shakespeare & Company, still my favorite bookstore ever (but now defunct), then I’d mosey to my newly-discovered H&H Bagels (still open today!), and then would go up to Fairway, and buy five carefully picked pieces of fruit to take for lunch. At college, I had been eating oatmeal for breakfast, and my blood glucose hadn’t been so bad, but yikes! Bagels! I remember my doctor stared at me, and said, so nicely, “It’s not the jam. Not really. The jam isn’t helping. It’s the bagels. Don’t have so many bagels. Try eating half a bagel daily.” I don’t even think my “fixed dose” was changed, but I did move to eating just half a bagel, for a while. When I met Dr. Jerry Share three years later at the Joslin Clinic in Boston, he said in no uncertain terms, “Stop eating half bagels – and when you have to, at least use a sliding scale!” That was 1993; DCCT had just been announced. My doctor was on it. I just went to eating bagels part-time.

But how I long for them! H&H was, by the way, my first introduction to sourdough bread, and I still love sourdough. I am eating too much of it in COVID-19 times, though am pre-bolusing (plus Afrezza insulin afterwards helps) – I feel so lucky that my insurance covers it.

It’s so gratifying to learn that what I thought was a personal failing actually is science.

And, yes, Dr. Kessler just puts it simply and bluntly. Don’t eat fast carbs. His binary advice is very helpful, largely because it’s so direct and factual and simple. And clear. Don’t do it. It’s not about you, or me. Fast carbs are just bad for us.

Dr. Kessler doesn’t scold readers on how to eat better. On the contrary, he is an empathetic narrator, as he describes his own battles with dieting and weight. “Food has been my nemesis,” he writes. “Overeating has been my curse . . . For a long time, I ate to feel better, to ease discomfort, and to calm anxiety.”

That struggle informs every chapter, and though a scientist specializing in gut biology might say the book itself has few revelations, I found it beautiful. Dr. Kessler makes me feel less bad. He identifies the expected villains (such as food processors who add sugar, fat, and salt to encourage overeating), highlights the many studies that affirm how ultra-processed foods link to bad health outcomes (heart disease, weight gain, metabolic chaos), and offers recommendations that are incredibly actionable.

Dr. Kessler’s central point is one that I truly didn’t understand before. I mean, I know I’m supposed to stay away from carbs. My biggest successes in avoiding carbs has been due to learning about time in range, from my CGM, and seeing in no uncertain terms – if you want to eat sushi, you can – but boy, will you pay.

Dr. Kessler is such a good explainer. People (everyone!), he says, need to move our diet to slow carbs, which are typically high in fiber, contain small amounts of starch, and are resistant to digestion. This is hardly just people with diabetes, this is everyone. Dr. Kessler includes a seven-day menu with slow-carb options. There is plain Greek yogurt for breakfast, cold tuna and pasta salad for lunch, and grilled fish with lentils for dinner. There are also, for any meal, cruciferous vegetables, such as kale, broccoli, cauliflower, asparagus, tomatoes, and bell peppers.

Dr. Kessler, you had us at whole oats.

The healthy food choices are perfectly fine; the problem is that our bodies are hard-wired for pancakes, rice, and most anything else made of processed flour and sugar. This depressing state of affairs is due in part to the different digestive paths of fast carbs and slow carbs: according to animal research, slow carbs release hormones that produce a sense of satiety, whereas fast carbs do the opposite. “Even though our bodies have absorbed the calories,” Dr. Kessler writes, “our hunger is not satisfied.”

In fact, the research suggests that fast carbs actually send signals to the brain to command more food, thus creating the ultimate carbohydrate conundrum: the more you eat, the hungrier you get!

Meanwhile, food manufacturers are effectively conspiring with our digestive tract to create, according to Dr. Kessler, products that are “almost pre-chewed” and “go down in a whoosh.” What you and I would call a corn chip is, to the food engineers, “a highly gelatinized plasticized mass,” and you can’t eat just one. No one can. By design.

Dr. Kessler tells readers that we can improve our diet, lose weight, and achieve better health outcomes. We know this is true. Yet and still, bottom line, his book is also a reminder of why America’s obesity epidemic is getting worse and why we’ll need even more than the publication of slow-carb menus – and a scientific explanation behind their benefits – to move the needle.

For all the insights about how the human body processes different types of food, as Dr. Kessler teaches us, can that knowledge by itself change our eating habits?

In perhaps his most compelling chapter, Dr. Kessler acknowledges that most of us understand, on an intellectual level, what we should be eating, so that education itself will have limited impact. We must strive for something deeper. To effect change, he writes, “we have to truly want to change – and that happens at an emotional level. Only when we can view fast carbs as not simply bad for us but as something we don’t actually want to put in our bodies, can we make new habits that are sustainable.”

Dr. Kessler says that we have to develop a heuristic, or a rule, that guides a “quick and automatic response” in the face of temptation. The rule has “to be so ingrained in your decision-making that you don’t have to think about it . . . Creating such reflexive rules prevents any ambiguity or stressful decision-making . . . [and] after a while, such rules simply become habitual. Free from anxiety, we can learn to sit down to a meal without being pulled by our neural circuitry to make impulsive decisions that are not aligned with our larger goals.”

Dr. Kessler doesn’t say how exactly we as individuals or a society create a new mindset, or emotional response, to food, but the effort has to be broad and positive. The federal government isn’t going to sponsor public service announcements against hash browns, but public health officials, combined with nutritionists, educators, pundits, and other leaders, need to create a different food culture to reduce exposure to fast carbs and to make healthy options a first choice.

Tobacco is the obvious example. Sixty years ago, smoking was glamorous. Today, we walk down Market Street in San Francisco (pre-COVID-19), and my kids will see a smoker and … just wait. “MOMMY! That person is smoking!” They will feign being sick (I think they think they are) and insist that we run past the person so we are not affected. Smoking is still legal, all right, but smoking rates have plunged as its deadly effects have become clear and tobacco has lost its glamor. And Dr. Kessler himself helped change tobacco’s fate – see pbs.org for more.  In an interview, Dr. Kessler explains:

The question, implicit in “Fast Carbs, Slow Carbs,” is this: can cultural signals for healthy foods lead to greater prominence in our diet? And, can this be legislated?

Will there be a day in which we all – as a matter of custom, and based on signals from educators, the media, and the community and culture at large – know to reach for kale rather than bagels?

I don’t know the answer, but if such a change is possible, I’d put David Kessler in charge.