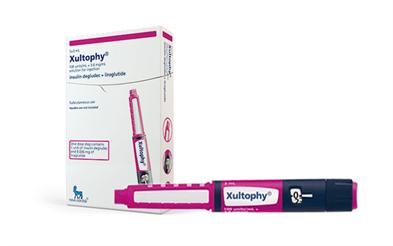 One of the biggest drug highlights at the 2015 ADA Scientific Sessions was a compelling presentation by diaTribe scientific Advisory Board member Dr. John Buse on brand new phase 3 clinical trial data comparing Xultophy (a fixed dose combination pen of liraglutide, a GLP-1 agonist, and insulin degludec, a long acting insulin, taken as a single injection) to Lantus (a long acting insulin) for the treatment of type 2 diabetes. The results of the 26-week study were very impressive: in the Xultophy arm of the trial, participants reduced their A1c by 1.8% (from 8.4% to 6.6%) from the start of the trial. This is compared to those who remained on Lantus, who experienced an average A1c reduction of 1.1% (from 8.2% to 7.1%). Clearly, in this trial there was a lot of room to improve A1c, and Xultophy was able to achieve a bigger reduction. We are always glad to see trials that have high baseline A1cs – in the “real world,” many patients who need a great deal of help have higher A1cs, and it is important that these trials reflect what will help this group in particular.

Excitingly, there was more good news for Xultophy. Those on Xultophy on average lost about three pounds, compared to an average weight gain of four pounds seen with those on Lantus. Xultophy also caused 57% fewer episodes of confirmed hypoglycemia, as well as an 83% reduction in nocturnal hypoglycemic events.

So what is the downside? Because it contains a GLP-1 agonist, Xultophy caused more nausea than Lantus did. That said, we were pretty impressed with the relatively low nausea rates – they were, in fact, lower than have been seen with standalone GLP-1 agonists, never affecting more than 4% of patients at any point in the trial. For sure, 4% of people is not insignificant – if one million people took the drug, that’d be 40,000 experiencing nausea – but overall, it’s a very small percentage compared to side effects seen on many other drugs.

The bottom line is that Xultophy lowers A1c, weight, and nocturnal hypoglycemia more effectively than Lantus without significant side effects: more than five times as many patients on Xultophy as on Lantus achieved an A1c below 7% without hypoglycemia or weight gain. This makes Xultophy a very compelling option for people with type 2 diabetes who need a more advanced therapy. Many, in fact, are saying that GLP-1/basal insulin combinations should be the “first injectable” for type 2 patients.

Xultophy is currently available in Europe, though unfortunately a US approval will be delayed until Tresiba – its insulin component – first receives a separate FDA approval. The FDA did not approve Tresiba in 2013, citing uncertainty over its effects on heart safety. Tresiba is also not approved for type 1 diabetes, though type 1 patients are not thought to be as much at risk. Novo Nordisk is currently conducting a massive cardiovascular outcomes trial in around 7,500 participants to prove the drug’s safety and recently resubmitted Tresiba to the FDA in early 2015. Meanwhile, Sanofi, the manufacturer of Lantus, is working on its own combination “LixiLan,” consisting of Lantus plus its GLP-1 agonist Lyxumia - which may reach the US market before Xultophy. These GLP-1/basal insulin combinations are certainly going to be an important option for managing type 2 diabetes down the road, as well as potentially type 1 diabetes (if approved, which would be much later, if at all) – we salute the researchers that are making this happen. -AJW/MV