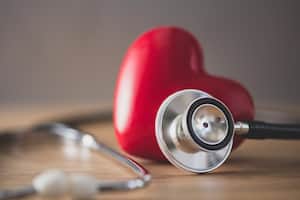 Learn what some of the latest research says about the heart health benefits of diabetes drugs like SGLT-2 inhibitors, GLP-1 receptor agonists, and non-steroidal MRAs.

In the past few years, newer drugs such as SGLT-2 inhibitors, GLP-1 receptor agonists, and non-steroidal mineralocorticoid antagonists (MRA) have shown impressive benefits for people with diabetes. These benefits are not just lowering A1C and improving Time in Range. Recent studies have begun to show that some of these drugs may improve heart health, kidney health, and weight management as well.

At the 2022 American College of Cardiology (ACC) Scientific Sessions in April, researchers presented the latest data on a number of diabetes drugs that positively impact heart health. Find out more about the benefits of each particular drug class below.

At the conference, the American Heart Association, American College of Cardiology, and Heart Failure Society of America’s 2022 guidelines on heart failure now recommend the use of SGLT-2’s as one of several key medications for treating heart failure with preserved ejection fraction (HFpEF). HFpEF is a condition where the heart becomes stiff, and cannot relax in order to pump enough blood throughout the body. Learn about other key medications for treating heart failure in our article, “Heart Failure – The Overlooked Diabetes Complication, Part 2: Prevention and Management.”

Additionally, researchers presented results from a clinical trial that looked at the use of an SGLT-1/SGLT-2 inhibitor (called sotagliflozin) in people with and without a history of heart disease. The results showed that the drug reduced the risk of non-fatal heart attacks, non-fatal strokes, and death from cardiovascular disease.

Though sotagliflozin is not yet approved by the FDA, it is approved for use in Europe under the brand name Zynquista.

Researchers also presented an analysis of pooled data from EMPEROR-Reduced and EMPEROR-Preserved, two trials which studied the impact of Jardiance (a SGLT-2 inhibitor) in almost 10,000 people with both types of heart failure. Researchers found that Jardiance reduced the participant’s risk of hyperkalemia (higher than normal potassium levels) in people with heart failure, without increasing the risk of hypokalemia by 18% (lower than normal levels of potassium levels).

Though potassium is an important chemical for your body to function, when its levels in the blood are too high it leads to hyperkalemia. This can be very dangerous and usually requires immediate treatment. Hyperkalemia has also been shown to increase the risk of death for people with heart failure.

Importantly, this analysis is the first time that an SGLT-2 inhibitor has been shown to reduce hyperkalemia or hypokalemia risk in people with heart failure.

As stated before, heart failure is a major issue, especially for people with type 2 diabetes. Unfortunately, there are limited medication options for treating this complication. Though SGLT-2 inhibitors have shown impressive results for improving outcomes for those with heart failure, not everyone is able to tolerate the drug’s side effects.

Additionally, in an analysis of the electronic medical records of 30,904 people treated at the Intermountain Heart Institute who took either an SGLT-2 inhibitor, a GLP-1, or both, those who received a combination of the drugs had much better outcomes when compared to those taking only one of the drugs.

Those taking an SGLT-2 inhibitor or GLP-1 receptor agonist alone were 29% or 24% more likely, respectively, to experience a major cardiovascular event than people on both drugs. And compared to those on a GLP-1 alone, people on both drugs had significantly less nausea, vomiting, and hypoglycemia. However, those on both drugs did not show significantly different A1C or weight reductions. In a study like this one, there may be some unknown biases (since the researchers are not able to control for every variable) – while these results are fascinating – they may not be indicative of each individual’s experiences with these drugs.

In the analysis, which included over 13,000 people with type 2 diabetes and chronic kidney disease (CKD), almost 6,000 also had atherosclerotic cardiovascular disease (ASCVD), a buildup of plaque in the blood vessels that can lead to a heart attack or stroke.

What the results showed was that Kerendia may be associated with improved outcomes for both people who had ASCVD and those who didn't, – with both groups having a lower risk for heart attacks, strokes, hospitalization for heart failure, kidney disease, and decline in kidney function.

Though these drug classes have clear benefits, there are some challenges in making sure that people have access to them.

Research that looked at the health records of almost 600,000 people with type 2 diabetes showed that only 12.9% of eligible people were prescribed a GLP-1 receptor agonist and only 11.6% an SGLT-2 inhibitor.

In addition, only about 50% of people continued to refill their prescriptions after the first year of using one of these drugs.

These statistics are quite shocking and the researchers pointed to a few main conclusions:

Read how these drugs can help you manage your diabetes and your heart health by checking out the articles below: