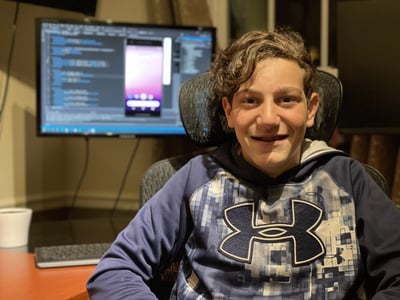 Teenager Drew Mendelow built a T1D1 app after recently being diagnosed with diabetes, hoping to help people keep track of their blood glucose levels, insulin injections, and carb intake. Drew told diaTribe about the inspiration behind the app and the impact that he hopes it will have on the diabetes community.

Drew Mendelow designed the app T1D1 (which stands for Type 1 from Day 1) with a specific goal in mind: to simplify diabetes management as early as possible since for many the learning curve for discovering how to dose insulin and count carbs can be overwhelming.

Drew knows the feeling well. He was diagnosed with diabetes last year at age 13, and after learning the basics of diabetes management, his healthcare team introduced him to a number of apps that could help him adjust to life with diabetes. Before long, he was inspired to design an app that would more closely fit his needs and would hopefully make diabetes management easier for others “so that they don’t have to think about it every minute of every day,” he said. 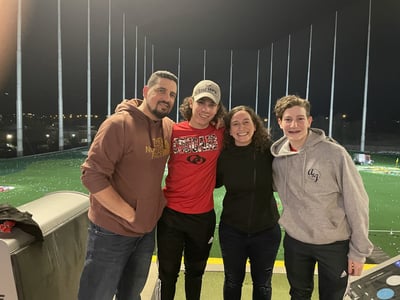 Drew currently attends middle school in the Washington D.C. area and enjoys playing soccer in his free time. His grandmother also has type 1 diabetes and was a helpful resource for him and his family in the weeks following his diagnosis. “She was the one we could call at 2 a.m. and ask for advice on how to manage Drew’s blood sugar,” said Drew’s mom, Laura.

Having previously coded video games in his spare time, Drew was confident that he could build an app that eliminated the need for spreadsheets and mental math, which he said can be time-consuming and inconvenient for quick decision-making. He subsequently developed T1D1, which allows people to track blood glucose levels, insulin doses, and carbohydrates. The app has an insulin calculator and allows users to choose a different insulin-to-carb ratio for every meal.

To make sure that the app was meeting people’s needs, Drew gathered feedback from healthcare professionals, people in the diabetes online community, and a group of over 70 online app testers. To date, T1D1 has about 13,500 downloads in over 50 countries. People have described the app as a game-changer in their personal lives, from parents who report feeling more comfortable having their children go to sleepovers to school nurses who feel more prepared to help students with their diabetes management. Many reported that the best part of the app is how easy it is to use and keep everything in one place.

Drew said he plans to continue enhancing the app while keeping the features streamlined and easy to use. His favorite feature is the ability for users to email their insulin log directly to a healthcare professional or family member. Equally exciting, the food library allows people to keep track of the amount of carbs in their diet. The notes section within the food library can be helpful for writing down specific recipes, especially for parents or family members who cook for a child with diabetes.

“I eat the same gluten-free waffles every day,” Drew said. “The app reminds me how many carbs are in a cup of flour or blueberries.”

Channeling his energy into this project has helped him to “own this condition,” said Laura.

The app also made it easier for Drew to maintain stable glucose levels throughout the day and during physical activities like soccer, before he eventually transitioned to using an insulin pump. Drew intends to keep the app free and without ads so that it can reach as many people as possible, especially those who can’t afford a pump.

“We’re working on translating the app so people can access it globally,” he added.

Drew has now teamed up with a medical student in Florida to evaluate how the app affects people’s confidence in managing diabetes from the day they are diagnosed. “Sometimes people are in the hospital for five or six days because they don’t feel comfortable going home and managing their diabetes themselves,” explained Laura. The goal is to equip people with diabetes with the tools and knowledge they need to get home as soon as possible.

T1D1 is available for free on the App Store and Google Play Store. To access our resources for people newly diagnosed with diabetes, click here.