ADA 2013 Preview: All the latest learning in CGM, insulin pumps, GLP-1, the cure for type 1, and more 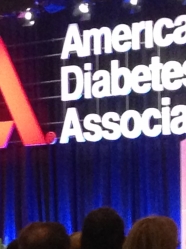 The 73rd Scientific Sessions of the American Diabetes Association will be held from June 21-25 in Chicago. The five-day conference will feature hundreds of presentations, debates, discussions, and general sessions from the leading figures in diabetes research. The ADA Exhibit Hall will also welcome a whopping 175 companies to present their latest therapies and devices. Highlights of ADA this year include new data and discussion on continuous glucose monitoring, insulin pumps, bariatric surgery, type 1 diabetes cure efforts, and the results of University of Texas Health Science Center at San Antonio’s Dr. Ralph DeFronzo’s triple therapy study. The following is our preview of some of the major talks of the conference.

An intriguing talk on Friday will come from the University of Michigan’s Dr. William Herman, who will discuss the cost-effectiveness of diabetes prevention – a major topic, considering diabetes cost the United States $245 billion in 2012 alone and there’s still no clear pathway to FDA approval for drugs targeting prediabetes. Later that day, various research teams will present their latest work on the artificial pancreas – that includes Dr. Ed Damiano’s bi-hormonal bionic pancreas, for which diaTribe Editor-in-Chief Kelly Close recently participated in a trial (see this month’s test drive for more).

On Saturday, some of the most esteemed thinkers in the field of diabetes research will discuss the biggest topics in type 2 diabetes care. GLP-1 agonists will be a major topic as Dr. Ralph DeFronzo reveals the long-awaited result of his triple therapy study, which combines metformin, Amylin’s once-weekly GLP-1 agonist Bydureon (exenatide), and Takeda’s TZD Actos (pioglitazone).

On Sunday, a session will look at alternative insulin delivery mechanisms, including inhaled and oral insulin as well as patches and microneedles. Patch pumps – a big topic after the approval of Insulet’s next-gen OmniPod and CeQur’s PaQ – will also be discussed in a Tuesday session led by Dr. Howard Zisser of the Sansum Diabetes Research Institute.

In what promises to be one of the liveliest debates of ADA, a Monday session will see Tulane’s Dr. Vivian Fonseca and Baylor’s Dr. Alan Garber discuss whether insulins or GLP-1 agonists represent the next best therapy for people with type 2 diabetes who are not finding success with oral medications.

We at diaTribe are also pleased and honored to announce that Monday night will be the 7th Annual Close Concerns and Taking Control of Your Diabetes Soiree, in which diaTribe Editor-in-Chief Kelly Close will lead a discussion panel featuring six luminaries in diabetes research. Drs. John Buse, Bruce Buckingham, Jim Gavin, Bob Henry, Philip Home, and Virginia Valentine, CDE will all be one hand to offer their perspectives on ADA 2013 and all that lies ahead in the field.–AW