Behind Bars, with Diabetes 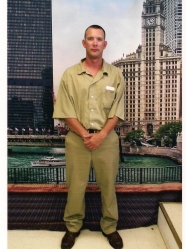 Jay is fortunate in one sense – through information sent to him by his father, he has educated himself about diabetes and understands the importance of tight control to reduce the risk of complications. That awareness motivates him. “My concern is that something bad will happen, like getting a limb cut off,” he said. (I had two 15-minute phone conversations with Jay.) His father sends him money to purchase healthier foods at the commissary, as the dining hall is a triumph on low-cost, high-carb offerings (rice, pasta, potatoes).