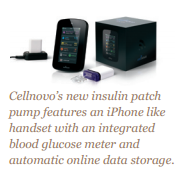 At EASD, Cellnovo announced that it had received approval in Europe for its new insulin patch pump. It will be launched soon in the UK, and its submission to the FDA is expected by the end of the year — meaning that approval in the US could come as early as 2012. However, the FDA has delayed the approval of a variety of other pumps, such as Medtronic’s Veo (available in 50 countries around the world since 2009) and Tandem’s t:slim, so it’s unclear how soon this patch pump will become available in the US.

For those unfamiliar with Cellnovo, the company’s product is different from other pumps on the market. The pump is worn on the body (like Insulet’s OmniPod), uses a very short infusion set (similar to a standard insulin pump infusion set, but only about four inches long – unlike Insulet, which does not use infusion sets), and communicates wirelessly to a handheld touch-screen controller. Users will get two reusable pumps so that one can be worn while the other is recharging. The pump also has a built-in accelerometer, which allows it to loosely monitor a user’s activity levels.

Cellnovo’s pump is controlled by an iPhone-like handset, a definite departure from some of the more utilitarian insulin pumps that are currently on the market. Similar to Insulet’s OmniPod, the handset integrates a blood glucose meter and displays and stores blood glucose and insulin delivery data. We also learned during EASD that the integrated blood glucose meter will use LifeScan’s new Verio test strips, which are reportedly some of the most accurate strips on the market. Verio was approved by the FDA in mid-September.

Besides the touch-screen controller, what is new about Cellnovo’s pump is the handset’s mobile capabilities. Every time it enters “sleep” mode (usually after three minutes of non-activity), the handset automatically transmits information (blood glucose, activity, pump, food) to an online portal, “Cellnovo Secure,” where the patient and healthcare providers can view it. The automatic data transfer occurs via a mobile phone network; there is no patient involvement and no cables. We know first hand how much of a hassle data downloading can be, and we appreciate that this pump tries to address that issue. As we understand it, the cost of mobile data will be bundled into the initial pump price.

Manufacturing insulin pumps is definitely challenging, so we’ll be interested to hear more about this one as it begins selling in Europe this year. For now, we’ll stay tuned for more on its progression through the FDA. --AB