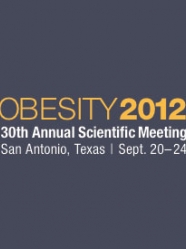 The 30th Annual Meeting of The Obesity Society (TOS) brought researchers, members of industry, and clinicians to San Antonio for five days of learning. The conference featured over 100 oral presentations, more than 850 posters, and more than 60 booths in the exhibit hall. Below are some of our biggest takeaways from the meeting.

The Potential of Anti-Obesity Drugs

The optimism for anti-obesity drugs was more tangible than ever on the heels of the recent FDA approvals of Vivus’ Qsymia and Arena/Eisai’s Belviq. Dr. Ken Fujioka (Scripps Health, San Diego) believed the approvals would “change the landscape,” while Dr. Preston Klassen (Orexigen, La Jolla, CA) noted that it is currently a “fantastic time for the obesity space.” Though little new data were presented on medications, some physicians even expressed interest in both Qsymia and Belviq to treat diabetes, especially on top of anti-glycemic drugs like metformin or GLP-1 agonists.

Vivus stole the show, as it launched Qsymia just two days before the meeting began. There were plenty of purple and white advertisements for Qsymia throughout the conference hall. By contrast, Eisai’s presence was understated, as Belviq must still pass through the Drug Enforcement Agency’s classification process (launch of Belviq is expected in early 2013). Vivus demonstrated their online free patient support program, Q and Me, which has since been launched and is available for at http://www.qandmesupport.com. The program is designed to support people taking Qsymia (but available to those not on the drug too) with tools and resources for weight loss (e.g., food and activity logs, a weight tracker, a recipe search, and food analyzer). We are glad that Vivus has made the lifestyle focused “Q and Me” program available to anyone – while an obesity medication like Qsymia will certainly help people lose weight, it’s certainly not a magic bullet or cure-all, and healthy living through diet and exercise will be key for keeping weight off long term.

What’s Next For Mobile Health?

TOS 2012 dipped its toe into mobile health (mHealth) for weight loss but also reminded us that there is a long way to go before effective, evidence-based mHealth solutions will be available for patients. Of course, there’s no shortage of options with over 1,000 weight-related applications available for Apple and Android phones! However, speakers reminded us that while many solutions seem promising, it is important to scientifically evaluate mHealth strategies to ensure that people can have access to efficacious, validated products.

We were particularly impressed by a presentation on Zamzee – the product is a two-part mHealth solution that includes a kid-friendly monitor that tracks activity and a motivational, incentive-based online website. Over a six-month trial, the 200+ children using the Zamzee averaged 44 more minutes per week of moderate/vigorous physical activity compared to the group not using the device! This translated to a 4.5-fold increase in the number of days that the kids reached the Centers for Disease Control recommended level of 60 minutes of moderate or vigorous physical activity. Encouragingly, the increased activity in the Zamzee group was sustained over time and was slightly stronger in the second half of the study. We have been testing Zamzee internally since mid-summer here at diaTribe – overall, although we’ve had a few problems associated with losing or breaking Zamzees, the early reviews have been very high, and at $29 per Zamzee (membership to the cool website is free with purchase of the device), this could certainly be a solution for large groups of children. The device is currently for purchase at www.zamzee.com.

The topic of sugary drinks received considerable attention at TOS, particularly during a debate on whether decreasing their consumption would decrease obesity. Both presenters referenced the rather two-sided information on the subject and no clear winner was established. The conference also included discussion on whether a tax on sugary drinks (similar to the current taxes on tobacco) could increase health awareness and provide cost savings. Dr. Steven Gortmaker (Harvard School of Public Health, Boston) estimated that a one cent per ounce tax on these drinks could reduce national health care costs by $1,700 per dollar spent, raise $12.7 billion each year in taxes, and lead to health benefits beyond those directly related to weight loss. Dr. Frank Chaloupka came to a similar conclusion: a penny per ounce tax on sugar sweetened beverages would generate approximately $15 billion in additional revenue per year. Now wouldn’t that be something to put toward obesity educations, subsidizing healthier foods, and exercise!

The 1st China Congress on Controversies to Consensus to Diabetes, Obesity, and Hypertension (CODHy) in Shanghai brought together international thought leaders in diabetes and about 250 attendees from across the globe. Highlights from this conference included insights into the state of diabetes management in China – the country with the largest population of people with diabetes in the world (about 100 million, almost four times as many as in the US) – both in the country’s specific treatment challenges and the preferred drug treatments.

One popular topic of debate was whether people of Asian descent require unique diabetes treatments given that the disease progresses a bit differently in this population. It has been fairly well established that Asians progress more quickly from prediabetes to diabetes and that Asians with diabetes have less insulin resistance, but more pancreatic beta cell failure, than patients of Caucasian descent. These differences have led to the theory that a different physiological mechanism may underlie type 2 diabetes among Asians. However, evidence presented at CODHy suggested that diabetes treatments developed in Western countries (e.g., sulfonylureas, metformin, DPP-4 inhibitors, and GLP-1 agonists) lower A1c just as much for Chinese patients as they do for Caucasians.

We also learned from a representative of the Chinese Society of Endocrinologists that sulfonylureas (SFUs) are still the oral drug class of choice for type 2 diabetes in China because they are cheaper than newer drugs. SFUs are slowly becoming less popular among US patients, primarily because they are associated with higher rates of hypoglycemia and their A1c-lowering effect does not last very long (i.e., patients start to see their A1c creep back up after about one year). In China, insurance coverage is more centrally regulated, and it seems that cost concerns play a large role in assessing the value of a drug.