Cross-Country Challenge: Phil Southerland Bikes to Whip His Rivals and Defeat His Disease 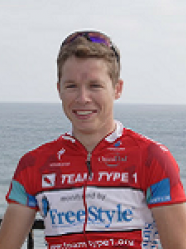 Phil Southerland is an energetic 24-year-old with a charmingly handsome grin and endearing southern accent. Diagnosed with type 1 diabetes as a 7-month-old, he has transformed his disease into a driving life force. Armed with a passion for competitive cycling, he's accomplished what many people deemed impossible: leading a team of type 1 athletes to achieve a record time in the3,000-mile Race Across America — completing the journey in 5 days, 16 hours, and 4 minutes.

Southerland is not the only type 1 athlete to excel — his counterparts have won Olympic gold medals, climbed Mount Everest, and played professional sports — but Southerland has distinguished himself by working to raise hundreds of thousands of dollars for the cause and by becoming an inspirational speaker to young people with diabetes.

"Phil is passionate about diabetes and controlling it, but he's also a good supporter and is understanding about where you're coming from," says Joe Eldridge, the co-founder of the all-diabetic TeamType1 cycling team. Southerland may have saved Eldridge's own life. When the two met in college at a bike race, Eldridge was in terrible control. But after Southerland starting making blood sugar bets with him (the loser had to buy dinner), Eldridge eventually got the message and began managing his diabetes more diligently.

From this friendship, formed in 2004, came the notion of uniting diabetics through cycling. Southerland thought they should form an official racing team. Eldridge came up with name "TeamType1." And they both adopted the motto "strive for 6.5," referring to their A1c goals. Eldridge has dropped from over 10% to 5.8%, while Southerland himself maintains an A1c of around 5.5% and mean glucose levels in the mid-80's.

Southerland, who earns his living as an insurance rep, says his enthusiasm springs from his plucky single mother, Joanna, who juggled several jobs to support him and his brother. "She always said, 'No matter what cards you're dealt, you always have a great hand!' And she helped me to have that same attitude."

His specific resolve to conquer diabetes can be traced to a birthday party when he was six years old: He wanted to eat birthday cake but didn't want to take the requisite injection. "That's fine," his mother told him. "You can eat the cake, but you'll go blind." That shook him up so much he begged for the shot.

"If I have to check my blood sugar 20 times a day for the rest of life, then I'm okay with that," Southerland says. "It's not that big a price to pay for eyesight."

show me the money

Southerland's current efforts were kicked off by a college assignment to write a business plan. He found himself outside Starbucks at the Mall of Georgia with a clipboard, surveying people about whether they would donate money to an organization that provided tools to help diabetics effectively manage their disease (and therefore negate the risk of long-term complications).

Mostly he was rebuffed, but then along came a guy who asked, "If I gave you money right now, what would you do with it?" Southerland had no intention of taking money on the spot, but the man insisted, pressing $400 cash on him and telling him to "get started."

"To this day, I have no idea why he did it," Southerland says. "But I kept my promise and bought T-shirts and business cards to promote the idea." While the group health management platform remains a long-term dream, what he has created is an organization (www.teamtype1.org) that now raises awareness and money for the Juvenile Diabetes Research Foundation (JDRF).

Southerland's personality was also critical in securing financial support for TeamType1. His endocrinologist, Dr. Bruce Bode, introduced him to executives at Abbott Laboratories, which became a sponsor. Southerland eventually managed to raise $400,000 from a variety of sponsors for the 2006 Race Across America, and he's added additional sponsors for 2007, including Amylin Pharmaceuticals, Specialized Bicycles, Zip Wheels, and Hammer Nutrition. "He's a salesman, for sure," Eldridge says. "He's extremely passionate about getting the word out about diabetes."

TeamType1 now consists of eight regular riders, including one woman, who collectively compete in 400-500 events throughout the year — from five-mile sprints, to Iron man triathlon events, to the 3,053-mile cross-country race. Southerland personally competes in about 60 events per year, training six days a week for up to six hours a day depending on the season.

But the grueling Race Across America created unique challenges. Renowned worldwide cycling coach Rick Crawford donated his services at a deep discount but only had four months to get his glucose-challenged group ready.

For his part, Southerland views blood sugar control not as an obstacle, but rather a puzzle to be solved. He's learned the importance of keeping glucose levels steady by starting out in the 120-150 range and eating often, rather than starting out high (in the 200 range) with the expectation of plummeting. He recently completed a 320-mile ride from Atlanta to Tallahassee, FL — 16 1/2 hours — and never fell below 80 or rose above 140.

"Blood sugar levels have a big effect on performance," he says. "So sometimes, in the 45 minutes before a race, I might check five times. But I don't check during riding: never have, never will." Still, things have been much easier now that he has a new continuous glucose monitor on his handlebars.

Through Dr. Bode, Southerland enrolled in a study of Abbott's investigational FreeStyle Navigator continuous monitor, which uses a sensor/transmitter on the body and a wireless receiver to provide glucose readings every minute. The monitor also has alarms for highs and lows. "It's fantastic," Southerland says. "Every other year I've done this type of intense training, my blood glucose crashes, especially overnight. Now (using the Navigator) I can go to sleep and rest assured."

Energy sources of choice are Snickers bars (a favorite since Southerland was a kid) and Hammer Gel, a gooey energy supplement that contains maltodextrin, which allows it to absorb slowly, providing extended energy.

TeamType1's victory, beating the 2nd place team by nearly an entire day, proved that "diabetics can do anything and everything that non-diabetics can do, but better — no offense!" Southerland says with a laugh. TeamType1 beat the Race Across America all-time corporate-team record by a full 19 hours.

Southerland's goals for the coming year are lofty yet simple: raise $210,000 for the JDRF (10 times the team's 2006 contribution), and repeat his team's cross-country victory - but this time, to "ride faster."

* Amy Tenderich is author of the popular web log www.diabetesmine.com, and co-author of the new book, Know Your Numbers, Outlive Your Diabetes.