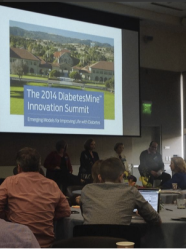 By Varun Iyengar and Adam Brown

Recently, DiabetesMine hosted its annual D-Data Exchange and Innovation Summit – two days that gather some of the brightest minds in diabetes technology to discuss ways to improve innovations in diabetes.

The D-Data ExChange is a somewhat smaller event held twice a year, specifically to bring together technology innovators and FDA members who are working on projects that leverage diabetes data to produce healthier outcomes.

The DiabetesMine Innovation Summit is a larger annual forum that addresses broader issues of accelerating innovation to improve life with diabetes. Here, DiabetesMine brings together a wider group of diabetes minds, including informed patient advocates, device designers, pharmaceutical marketing and R&D leaders, health technology visionaries, clinicians, regulatory experts, and more. For a video on the Summit, please see this link (featuring our very own Kelly Close!).

This year, the two days focused on issues of patient empowerment, with discussions that highlighted grassroots movements to improve device connectivity (The Nightscout Project), FDA interest in patient engagement, and an update on the Bionic Pancreas. For more details, see below!

We are elated to hear the phrase “device interoperability” thrown around more and more at conferences. Although it’s a big phrase, device interoperability simply is the ability for multiple devices – a CGM, an insulin pump, a computer, a fitness tracker – to communicate with each other and/or easily share data. A major point of discussion at this year’s Summit was how integration of devices could significantly reduce the burden of diabetes. After all, data uploading has historically been inconvenient due to the hassle involved with multiple products requiring separate, incompatible types of software and cables to analyze data.

Connectivity expert Dr. Joseph Cafazzo (University of Toronto) stressed that market-wide “standards” could change all of this. These standards would essentially be a set of instructions that lay out a uniform data format for blood glucose meters, continuous glucose monitors, and pumps for all device manufacturers (with a focus on Bluetooth). Dr. Cafazzo and his team have been working on creating standards for blood glucose meters, insulin pumps, and CGMs, with the support of the JDRF. Now, the goal is to get device manufacturers to build the new standards into their next-generation products. The hope is that with devices that talk to each other, a whole new ecosystem of applications and software could be created that would ease the burden of managing diabetes. This has been the case in other fields (Digital Imaging, with the DICOM standard), and would be very welcome indeed for patients.

The FDA’s Take on Connectivity and Patient Engagement

The FDA seems very interested in standards for diabetes devices. Indeed, the inspiring Dr. Stayce Beck (FDA’s Branch Chief for Diagnostic Devices) stressed that the lack of interoperability will become a major roadblock and limit innovation. Dr. Beck’s valuable presentation also emphasized the FDA's focus on increasing patient involvement in its decision-making process, and she had very positive things to say about the #DOCAsksFDA meeting on November 3. The agency seems to be more supportive of new products compared to several years ago, a sentiment that was best captured by Amy Tenderich of DiabetesMine: "The FDA has gone from zero to hero in this community!”

As we’ve covered in diaTribe before, Nightscout is a system created by some smart parents of children with diabetes. They created a program that “hacks” into the Dexcom G4 Platinum receiver to send its CGM data to an Android device, which then stores the data and sends it to an open-source device, like a Pebble watch, a computer screen, or another phone. The do-it-yourself system allows caregivers of diabetic patients to keep track of glucose data remotely (see Kerri Sparling’s recent column for more details), which can offer peace of mind as well as safety. The recently approved Dexcom Share, a remote monitoring system for the Dexcom G4 Platinum CGM, also provides patients with the ability to share their CGM data with others: you can read our full comparison of the Share versus Nightscout in our test drive.

DIYPS is also a home-built system that was developed by Dana Lewis (who has type 1 diabetes) and Scott Liebrand in the fall of 2013. The system takes CGM data and predicts where the blood sugar trends are heading in the future, so that it can provide real-time predictive alerts for future high and low blood sugar levels. It also provides recommendations for insulin and carb adjustments to avoid these highs and lows. The device could be called an "artificial pancreas-lite” in that it does the same insulin arithmetic that an actual artificial pancreas would do, except that the user has to control his/her insulin manually. Ms. Lewis praised the system for providing her with actionable information in the moment, which has resulted in improved blood sugars, more time in range, and greater safety.

Taken together, the clear message was that some people "are not waiting" (#WeAreNotWaiting) for the FDA and industry to jump on board with interoperability and device innovation.

An Update on the Bionic Pancreas

We were glad to hear an update on the Bionic Pancreas from Dr. Ed Damiano (Boston University). He and co-worker Dr. Steven Russell began an 11-day study in May that is testing the device in 40 adults with type 1 diabetes. The study gives patients the freedom to live at home and go about their normal lives (including driving!) with limited remote monitoring. So far, in 14 participants, the average blood glucose of bionic patients has been 138 mg/dl, and they have spent just 0.6% of the time in hypoglycemia (< 60 mg/dl)! The study will take place at two more centers in 2015 - Stanford University and University of North Carolina at Chapel Hill - and we hope to hear final results next year.

Dr. Damiano also addressed concerns that the Bionic Pancreas relies too heavily on glucagon. Some critics have argued that the system should use glucagon more like the airbag in a car (which only deploys in extreme situations for rescue) as opposed to normal brakes (which are used all the time). However, Dr. Damiano assured the audience that the use of glucagon and insulin in the Bionic Pancreas falls in the normal range. Future studies will provide great perspective on these points, especially the planned pivotal study that would last for several months with an integrated device (dual-chamber pump with insulin and glucagon, and a built-in control algorithm).

Last, Dr. Damiano addressed a more fundamental concern – the risk of failure, including infusion set failure, CGM failure, or inaccurate CGM readings. Dr. Damiano said his team is building in many safety features to address these issues, including the ability to set a higher glucose target (if you want the system to target an average of 120 mg/dl instead of 100 mg/dl), alarms, remote monitoring capabilities, a reversion to a background basal rate, and more. Dr. Damiano acknowledged that the greatest concern remains false-high CGM readings – a value of 200 mg/dl on the CGM when the real blood glucose is 100 mg/dl. To address this risk, he emphasized that the bionic pancreas uses small doses of insulin/glucagon and will likely restore patients’ hypoglycemia awareness (recurrent hypoglycemia is what causes hypoglycemia unawareness in the first place, so avoiding hypoglycemia for a period of time actually can restore awareness) – both should help mitigate the potential of severe hypoglycemia. And of course, it’s likely that what many patients are doing in the real world is far more dangerous than the risks brought on by the Bionic Pancreas.

Mr. Richard Wood of the market research company dQ&A gave an excellent presentation on key findings gathered from recent patient surveys, including research on diabetes stigma. His presentation highlighted the patient experience with current diabetes technologies and the factors that motivate management. Some of the highlights are summarized below:

[Editor's note: Disclosure: diaTribe is supported in part by donations from participants in dQ&A surveys.]