European Association for the Study of Diabetes 2013: Type 2 Therapies for Type 1 Diabetes? 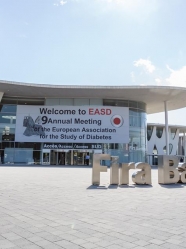 By Adam Brown and Nancy Liu

Twitter summary: At the biggest European conference at diabetes, we hear new research on type 2 drugs for type 1.

EASD was terrific this year – our annual trek to Europe was enormously interesting. We discovered that some drugs for type 2 diabetes (e.g., GLP-1 agonists) can be used for type 1 diabetes. Several trials have shown several benefits of GLP-1 agonists in people with type 1 diabetes: improved A1c, reduced insulin doses, and help with weight loss.

This year at the 49th Annual Meeting of European Association for the Study of Diabetes (EASD), we visited beautiful Barcelona, Spain from September 22-27. We were intrigued to hear about the use of type 2 diabetes incretin therapies – namely, DPP4 inhibitors and GLP-1 receptor agonists – for type 1 diabetes. In the US, the currently available GLP-1 agonists are Victoza, Bydureon, and Byetta, and DPP-4 inhibitors include Januvia, Onglyza, Tradjenta and Nesina. In Europe, the GLP-1 agonist Lyxumia and DPP-4 inhibitor Galvus are also available.

Dr. Urd Kielgast from the University of Copenhagen in Denmark provided a comprehensive overview of studies examining these drugs for type 1 diabetes, concluding that GLP-1 agonists seem promising and deserve large-scale trials to investigate these benefits for type 1. Novo Nordisk is conducting just such a trial – the 1,404-patient ADJUNCT ONE trial is expected to begin in December 2013 (ClinicalTrials.gov Identifier: NCT01836523).

GLP-1 agonists are delivered by injection (once-daily with Victoza, once-weekly with Bydureon). In type 2 diabetes, these drugs stimulate the pancreas to release insulin in response to high glucose levels – they are glucose dependent, meaning they do not appear to cause hypoglycemia. For more information on the mechanism of GLP-1 agonists, please read our learning curve.

Several small studies done on GLP-1 agonists for type 1 diabetes show encouraging potential for improving A1c and glycemic control, reducing insulin dose, reducing the risk of hypoglycemia, and helping with weight loss. Since type 1 patients typically don’t have any remaining insulin-producing cells, GLP-1 agonists work through secondary mechanisms. First, the drug class inhibits glucagon, which reduces the amount of sugar that the liver releases into the blood. GLP-1 agonists also promote satiety so patients typically feel full more quickly. GLP-1 agonists also slow the rate at which the stomach empties, meaning glucose spikes after meals may not be as rapid. A combination of these effects may contribute to the benefits seen in type 1 diabetes. Editor-in-chief Kelly Close wrote about her experience using the GLP-1 agonist Victoza (liraglutide) off-label in our test drive, and she found that it improved her glucose control, reduced her insulin doses, and gave her hope for the potential of these drugs for type 1 diabetes.

Both GLP-1 agonists and DPP-4 inhibitors suppress glucagon, the hormone responsible for releasing glucose into the blood, and thus help with blood-glucose lowering. Encouraging research shows that these drugs do not stop glucagon from being released during low blood sugars and therefore do not increase the risk of hypoglycemia, which would be a big advantage of this class.

Dr. Kielgast concluded that there is now enough evidence to conduct large-scale clinical trials to discover potential long-term benefits of GLP-1 agonists in type 1. We’re glad to see Novo Nordisk working on Victoza for type 1 diabetes in a big way. diaTribe has been following this work since 2010, when Editor-in-Chief Kelly Close wrote an open letter urging Novo Nordisk to study Victoza in type 1 diabetes.

The information published in diaTribe is not a substitute for medical advice and should not be used to make decisions that change treatment. We urge readers to consult with professional healthcare providers for questions regarding their treatment and in all matters related to their health.