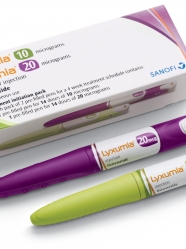 On February 1, the European Commission announced that it had approved Sanofi and Zealand Pharma’s GLP-1 agonist Lyxumia (lixisenatide) for type 2 diabetes. The drug is a once-daily injection that is particularly useful for controlling after-meal blood glucose levels – early trial results suggested it may be even better than Novo Nordisk’s Victoza specifically for post-meal spikes, but perhaps not in other areas of glucose control. When blood sugar is high, GLP-1 agonists trigger the secretion of insulin, suppress the release of sugar from the liver, and slow the digestion of food. Some people also feel less hungry and eat less. Apart from controlling blood sugar, the two major benefits of the drug are a low risk of hypoglycemia and weight loss, and the main side effect is nausea. Sanofi, which will market Lyxumia, has announced that it will be available in Germany and the UK in the early months of 2013.

Sanofi has submitted a new drug application for lixisenatide in the US (the trade name has not been determined in the US yet), and on February 19 the FDA accepted the application. If approved by the FDA, lixisenatide will become the fourth GLP-1 agonist available on the market, following Victoza, Byetta, and Bydureon. Sanofi is also working on combining lixisentatide and the basal insulin Lantus in a single device. It will offer a fixed dose of lixisenatide but let patients adjust their dose of Lantus. The combination would certainly be less of a hassle for patients and may help improve glucose control much more than each therapy used alone. Since patients typically lose weight while taking GLP-1 agonists, the combination could also overcome the weight gain usually seen with insulin therapy. Unfortunately, Sanofi recently ran into a “technical glitch” that will delay its lixisenatide-Lantus “fix-flex” device from starting phase 3 trials in the first half of 2013.

With many GLP-1 agonists available, patients and their HCPs will need to decide which of these will serve them best. For some, once-daily Victoza may be easier to start. The once-weekly Bydureon injection gives individuals the freedom not to worry about a taking a daily drug. For others, after-meal blood glucose spikes may be a greater problem, and lixisenatide might be a good choice. More options are good news for patients, and the expansion of this drug class will make it easier for individuals to optimize their type 2 diabetes management. –MN