FDA Approves Tandem’s t:slim Touchscreen Insulin Pump; Company Plans to Launch in the US in the First Half of 2012 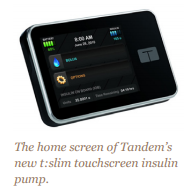 Tandem Diabetes Care recently announced that its much anticipated t:slim insulin pump had received FDA clearance. This new pump features a color touchscreen and sleek software – innovations that we’ve come to expect in the consumer electronics space but are relatively new to the medical device space. The t:slim is up to 25% slimmer than the Animas Ping and Medtronic Paradigm insulin pumps, and also includes a rechargeable battery and a 300-unit insulin reservoir. For the data-driven, Tandem’s t:slim has USB connectivity for downloading 90 days of data to t:connect, a web-based application compatible with Macs and PCs. The t:slim insulin reservoir (what Tandem calls a ‘cartridge’) is also designed with a standard luer lock connection, allowing it to connect to all commercially available infusion sets with luer connectors (e.g., Comfort, Cleo, Inset, or Quick-set). We believe the t:slim will draw more people to insulin pumping. Currently, the t:slim is only approved for patients 12 years and older, although we believe Tandem will eventually conduct studies in younger children to expand this indication. Until that time, we suspect some doctors and educators may prescribe it “off-label” to patients younger than 12 years old.

We first saw the pump at last year’s AADE annual meeting (see NewNowNext in diaTribe #25) and had the opportunity to demo it in November right after it received clearance. We changed a reservoir cartridge, primed an infusion set, gave a bolus of saline, changed settings, and extensively navigated through the pump’s software interface. Holding the actual pump and leafing through the menus was a valuable experience for us; it feels more like using an iPhone than a traditional insulin pump. The influence of Steve Jobs is certainly apparent at first glance: the color touchscreen, the button at the top of the device to the turn the screen off, and a single button push to return to the home screen. The demo left us more convinced that the t:slim is quite an innovative insulin pump.

Big picture, the pump’s user interface is a major highlight – it’s easy to use, intuitive, fast, sensitive to touch (with vibration and/or sound feedback), and does both the obvious – e.g., aesthetics, color, simplicity – and less obvious quite well. For example, we liked the insulin-on-board data on the home screen, the user confirmation screens and alarms, and the highly customizable profiles. As part of the development of the pump, Tandem gathered insights from over 4,000 people before deciding on the final design, paying particular attention to optimizing the pump’s software and user interface. For instance, the t:slim is said to significantly reduce the number of keystrokes to use advanced features compared to other pumps – we like that, since it means users will have to think about diabetes less, all else equal. Similar to the iPhone, returning to the home screen is possible at any time using a “bail out button.” Remarkably, in user studies, the majority of patients never referred to the instruction manual, and on average, the t:slim’s user interface is said to take about 90 minutes to learn. The screen was larger or comparable to other pumps on the market, and seemed clearer and more readable than other pumps we’ve seen. 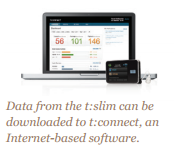 Tandem’s t:slim also lived up to its name quite well, with a slim profile about the thickness of a deck of cards. The pump had a more durable feel than we expected, and it will be manufactured from Tandem’s headquarters in San Diego. The reservoir change process was pretty automated; on-screen messages guided the process, which centers on a Tandem-supplied, gum pack-sized cartridge that holds the insulin (up to 300 units) and contains the pump’s novel insulin delivery mechanism. Instead of conventional piston driven delivery, where a mechanical screw drives a syringe built into a reservoir (the way a Medtronic or Animas or Roche pump works), the t:slim uses a micro-delivery technology. This means that very small amounts of insulin are shuttled from the reservoir to the infusion set, and the full insulin supply is never directly exposed to the patient’s body (as it is with other pumps). The t:slim also uses a volume-based technology to determine how much insulin has been pumped, unlike traditional syringe pumps that measure the action of the syringe but not how much fluid has actually been dispensed. Notably, the pump can deliver basal rates as low as 0.1 units per hour and in increments of as little as one one-thousandth of a unit of insulin (0.001 units). This may represent a higher level of accuracy from other pumps on the market, and we would be very interested to see pump comparison studies conducted. Of course, Tandem’s insulin delivery technology is completely new and unproven, so all eyes will certainly be on the company in the first few months after launch to ensure patient safety. While the FDA clearance carries significant weight on the safety front in particular, the new pump has not been used in large groups of patients over long periods of time yet.

As noted, we were initially concerned about the t:slim’s durability, but Tandem has reportedly tested the pump for both accidental drops and water. The pump is similar to an iPhone in that it is “drop resistant” – i.e., the screen can crack given a drop is significant enough, but as we understand it, warranty programs will be available. Typically, “the devil is in the details” with regard to such programs, so we hope it is one that is robust. Encouragingly, Tandem has informed us that if a user accidentally cracks the screen, the pump would be replaced under t:slim’s warranty. Tandem will also provide protective cases and screen covers in the pump’s starter kit, and other accessories will also be available for purchase. Unlike the Animas pumps and Insulet’s OmniPod, the t:slim is not waterproof, which is a detraction. According to the company, t:slim has been tested to function in three feet of water for 30 minutes (what’s known as an IPX7 rating, similar to Medtronic pumps). However, we know patients who have had water damage problems with Medtronic and other pumps despite this indication, so we look forward to greater clarity on t:slim’s durability in a more real world setting.

While the FDA has cleared the pump to be sold in the US, Tandem is still building its business operations and plans to launch the t:slim during the first half of 2012. Reimbursement information will be forthcoming. We’re very glad to finally see the t:slim approved after six months at FDA and we eagerly await giving it a real test drive in the near future. –AB/KC