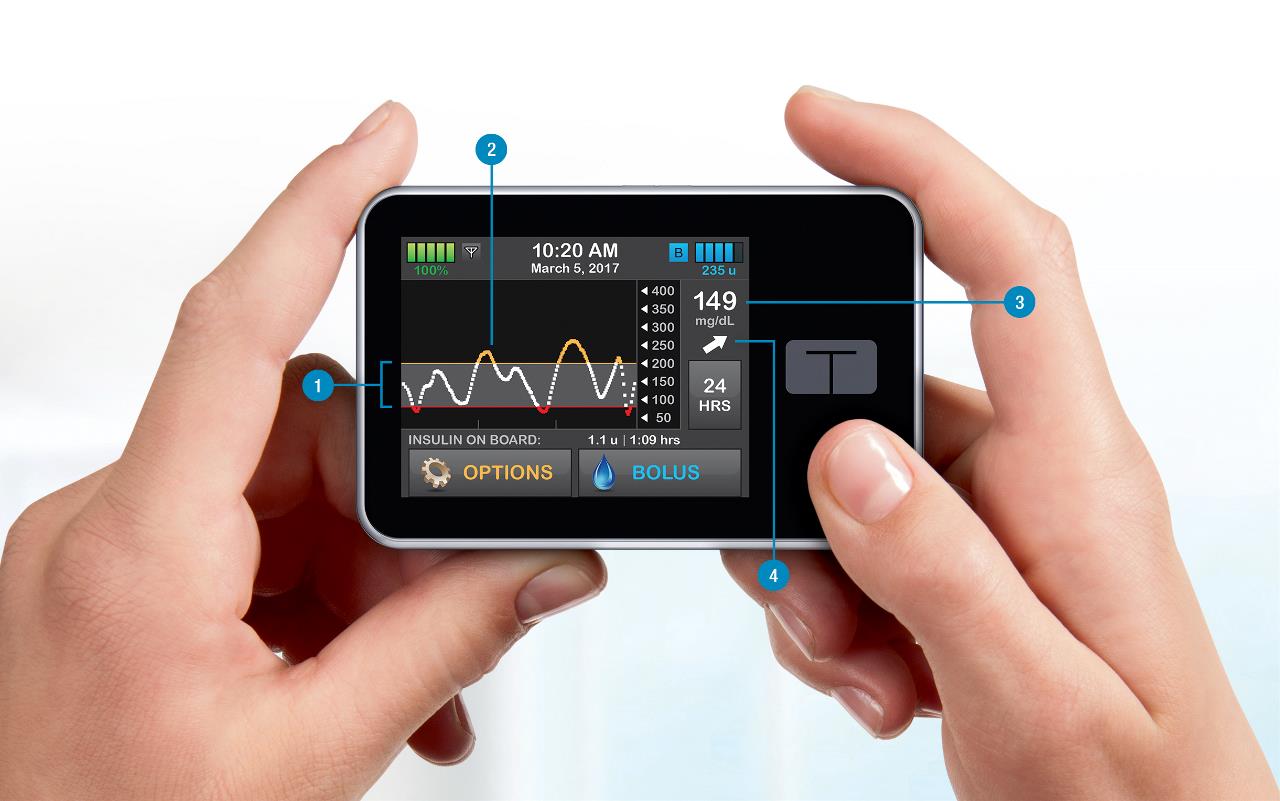 Free software upgrade for t:slim X2 users, first G5-integrated pump on the market, CGM can be used for insulin dosing and remote monitoring

Tandem just recently announced FDA approval and launch of its t:slim X2 insulin pump with integrated Dexcom G5 CGM. The update allows data from the G5 CGM transmitter to be sent directly to the t:slim X2 insulin pump screen, both a convenience win and paving the way for future critical updates that add automated insulin delivery.

The t:slim X2 with G5 is approved for people 6 years and older, and users can still see their CGM data at the same time on Dexcom’s own iOS and Android  smartphone apps. Tandem is the first company to launch a Dexcom G5-integrated pump – Animas’ One Touch Vibe Plus was approved last December, but still hasn’t launched.

Current t:slim X2 users can add G5 integration to their pump for free using the Tandem Device Updater (check out diaTribe columnist Kerri Sparling’s post on how easy it is to do!). These customers will receive an email with instructions on how to update their pump’s software at home. Updating insulin pump software at home for free allows people with diabetes to avoid the hassle and cost of getting a new pump – a major win. With its software update capabilities, Tandem’s t:slim X2 can now keep up with innovations that happen within a pump’s four-year warranty cycle.

Similar to the standalone G5, Dexcom data displayed on the t:slim X2 can be used for insulin dosing decisions. The G5 still requires two fingersticks per day for calibration, and these can be entered on the pump screen or in Dexcom’s smartphone app. Since the G5 on-body transmitter can communicate with both the t:slim X2 and G5 app, using one device will automatically update the other.

Like its predecessor, the t:slim G4, the t:slim X2 with G5 still shows the Dexcom sensor graph, current glucose level, and trend arrow on the home screen. Insulin on board is shown right under the sensor graph, an important feature to reduce the chances of “insulin stacking” (i.e., taking too many boluses in a row to correct a high blood sugar).

This update also adds a more accurate Dexcom CGM algorithm (“Software 505”) relative to the t:slim G4. Remote monitoring is now possible too – useful for parents and caregivers – since the G5 can send data to both the pump and Dexcom app. If a user decides not to use CGM, the sensor graph on the pump will disappear and the “bolus” and “options” buttons will appear in the center of the t:slim X2 screen.

The t:slim X2/G5 does not yet include automated insulin delivery algorithms. However, Tandem has just started a pivotal study of its predictive low glucose suspend (PLGS) system with Dexcom G5 CGM, which it hopes to launch next summer (2018). This system will suspend basal insulin when hypoglycemia is predicted (based on CGM levels), and then resume insulin delivery when glucose levels begin to rise. Tandem plans to offer the same software update capabilities for this product, meaning t:slim X2 users will be able to software update their pump and add the PLGS algorithm – no new pump needed! Tandem has shared that charges may apply once this update is available.

Tandem’s second-generation hybrid closed loop device with TypeZero remains under development, with plans to launch by the end of next year. In addition to minimizing lows (like PLGS), it will minimize highs by increasing insulin delivery based on Dexcom’s G6 CGM levels.

Upgrade Details for Tandem Users with an original t:slim or t:slim G4:

For the approximately 45,000 Tandem users not currently on the t:slim X2, Tandem has an upgrade pathway to get the new pump. Those with an earlier generation t:slim pump can upgrade to a new t:slim X2 for $399 if their original pump was purchased on or after July 1, 2015 or for $799 if their original pump was purchased prior to June 30, 2015. t:slim G4 users can receive a refurbished t:slim X2 for $399 or purchase a new t:slim X2 for $799. This updgrade offer expsires at the end of September. To avoid the upgrade fee, these users can also wait until their pump is four years old, at which point insurance will typically cover a new one. More information can be found here.

Upgrade for Roche and Animas Users:

Tandem is also offering eligible Animas and Roche pump users the chance to use a Tandem pump for the remainder of their warranty. See this page for more details.